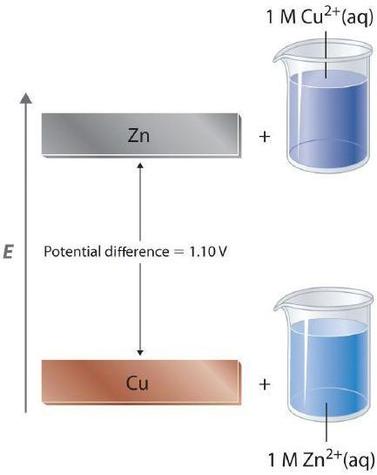 Because the potential energy of valence electrons differs greatly from one substance to another, the voltage of a galvanic cell depends partly on the identity of the reacting substances. If we construct a galvanic cell similar to the one in part (a) in Figure \(\PageIndex{1}\) but instead of copper use a strip of cobalt metal and 1 M Co2+ in the cathode compartment, the measured voltage is not 1.10 V but 0.51 V. Thus we can conclude that the difference in potential energy between the valence electrons of cobalt and zinc is less than the difference between the valence electrons of copper and zinc by 0.59 V.

The measured potential of a cell also depends strongly on the concentrations of the reacting species and the temperature of the system. To develop a scale of relative potentials that will allow us to predict the direction of an electrochemical reaction and the magnitude of the driving force for the reaction, the potentials for oxidations and reductions of different substances must be measured under comparable conditions. To do this, chemists use the standard cell potential (E°cell), defined as the potential of a cell measured under standard conditions—that is, with all species in their standard states (1 M for solutions, concentrated solutions of salts (about 1 M) generally do not exhibit ideal behavior, and the actual standard state corresponds to an activity of 1 rather than a concentration of 1 M. Corrections for non ideal behavior are important for precise quantitative work but not for the more qualitative approach that we are taking here. 1 atm for gases, pure solids or pure liquids for other substances) and at a fixed temperature, usually 25°C.

Measured redox potentials depend on the potential energy of valence electrons, the concentrations of the species in the reaction, and the temperature of the system.

This cell diagram corresponds to the oxidation of a cobalt anode and the reduction of Cu2+ in solution at the copper cathode.

All tabulated values of standard electrode potentials by convention are listed for a reaction written as a reduction, not as an oxidation, to be able to compare standard potentials for different substances (Table P1). The standard cell potential (E°cell) is therefore the difference between the tabulated reduction potentials of the two half-reactions, not their sum:

The overall cell reaction is the sum of the two half-reactions, but the cell potential is the difference between the reduction potentials: Figure \(\PageIndex{2}\): The Standard Hydrogen Electrode. The SHE consists of platinum wire that is connected to a Pt surface in contact with an aqueous solution containing 1 M H+ in equilibrium with H2 gas at a pressure of 1 atm. In the molecular view, the Pt surface catalyzes the oxidation of hydrogen molecules to protons or the reduction of protons to hydrogen gas. (Water is omitted for clarity.) The standard potential of the SHE is arbitrarily assigned a value of 0 V.

Although it is impossible to measure the potential of any electrode directly, we can choose a reference electrode whose potential is defined as 0 V under standard conditions. The standard hydrogen electrode (SHE) is universally used for this purpose and is assigned a standard potential of 0 V. It consists of a strip of platinum wire in contact with an aqueous solution containing 1 M H+. The [H+] in solution is in equilibrium with H2 gas at a pressure of 1 atm at the Pt-solution interface (Figure \(\PageIndex{2}\)). Protons are reduced or hydrogen molecules are oxidized at the Pt surface according to the following equation:

One especially attractive feature of the SHE is that the Pt metal electrode is not consumed during the reaction. Figure \(\PageIndex{3}\): Determining a Standard Electrode Potential Using a Standard Hydrogen Electrode. The voltmeter shows that the standard cell potential of a galvanic cell consisting of a SHE and a Zn/Zn2+ couple is \(E°_{cell}\) = 0.76 V. Because the zinc electrode in this cell dissolves spontaneously to form Zn2+(aq) ions while H+(aq) ions are reduced to H2 at the platinum surface, the standard electrode potential of the Zn2+/Zn couple is −0.76 V.

Figure \(\PageIndex{3}\) shows a galvanic cell that consists of a SHE in one beaker and a Zn strip in another beaker containing a solution of Zn2+ ions. When the circuit is closed, the voltmeter indicates a potential of 0.76 V. The zinc electrode begins to dissolve to form Zn2+, and H+ ions are reduced to H2 in the other compartment. Thus the hydrogen electrode is the cathode, and the zinc electrode is the anode. The diagram for this galvanic cell is as follows:

The half-reactions that actually occur in the cell and their corresponding electrode potentials are as follows:

Although the reaction at the anode is an oxidation, by convention its tabulated E° value is reported as a reduction potential. The potential of a half-reaction measured against the SHE under standard conditions is called the standard electrode potential for that half-reaction.In this example, the standard reduction potential for Zn2+(aq) + 2e− → Zn(s) is −0.76 V, which means that the standard electrode potential for the reaction that occurs at the anode, the oxidation of Zn to Zn2+, often called the Zn/Zn2+ redox couple, or the Zn/Zn2+ couple, is −(−0.76 V) = 0.76 V. We must therefore subtract E°anode from E°cathode to obtain

Because electrical potential is the energy needed to move a charged particle in an electric field, standard electrode potentials for half-reactions are intensive properties and do not depend on the amount of substance involved. Consequently, E° values are independent of the stoichiometric coefficients for the half-reaction, and, most important, the coefficients used to produce a balanced overall reaction do not affect the value of the cell potential.

E° values do NOT depend on the stoichiometric coefficients for a half-reaction, because it is an intensive property.

To measure the potential of the Cu/Cu2+ couple, we can construct a galvanic cell analogous to the one shown in Figure \(\PageIndex{3}\) but containing a Cu/Cu2+ couple in the sample compartment instead of Zn/Zn2+. When we close the circuit this time, the measured potential for the cell is negative (−0.34 V) rather than positive. The negative value of \(E°_{cell}\) indicates that the direction of spontaneous electron flow is the opposite of that for the Zn/Zn2+ couple. Hence the reactions that occur spontaneously, indicated by a positive \(E°_{cell}\), are the reduction of Cu2+ to Cu at the copper electrode. The copper electrode gains mass as the reaction proceeds, and H2 is oxidized to H+ at the platinum electrode. In this cell, the copper strip is the cathode, and the hydrogen electrode is the anode. The cell diagram therefore is written with the SHE on the left and the Cu2+/Cu couple on the right:

The half-cell reactions and potentials of the spontaneous reaction are as follows:

Thus the standard electrode potential for the Cu2+/Cu couple is 0.34 V.

The standard cell potential for a redox reaction (E°cell) is a measure of the tendency of reactants in their standard states to form products in their standard states; consequently, it is a measure of the driving force for the reaction, which earlier we called voltage. We can use the two standard electrode potentials we found earlier to calculate the standard potential for the Zn/Cu cell represented by the following cell diagram:

This is the same value that is observed experimentally. If the value of \(E°_{cell}\) is positive, the reaction will occur spontaneously as written. If the value of \(E°_{cell}\) is negative, then the reaction is not spontaneous, and it will not occur as written under standard conditions; it will, however, proceed spontaneously in the opposite direction. As we shall see in Section 20.9, this does not mean that the reaction cannot be made to occur at all under standard conditions. With a sufficient input of electrical energy, virtually any reaction can be forced to occur. Example \(\PageIndex{2}\) and its corresponding exercise illustrate how we can use measured cell potentials to calculate standard potentials for redox couples.

Asked for: standard electrode potential of reaction occurring at the cathode

A We have been given the potential for the oxidation of Ga to Ga3+ under standard conditions, but to report the standard electrode potential, we must reverse the sign. For the reduction reaction Ga3+(aq) + 3e− → Ga(s), E°anode = −0.55 V.

B Using the value given for \(E°_{cell}\) and the calculated value of E°anode, we can calculate the standard potential for the reduction of Ni2+ to Ni from Equation \(\ref{20.4.2}\):