The measurement of electrode energy requires that a reference point be established, and that individual electrode energies be taken relative to a potential that is fixed. This is normally done by introducing a second electrode, called the reference electrode, whose chemical composition is fixed and its potential energy unchanging. Thus, the term potential, in an electrochemical sense means the voltage difference between two electrodes, and is denoted “E”, with units of volts. The arrangement of a metal electrode immersed in a solution of charged electrolyte along with a reference electrode is referred to as an electrochemical cell (Figure 1), and E the cell potential. 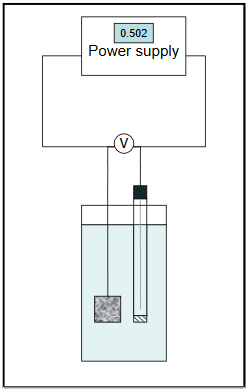 Charge movement can occur between the metal electrode and a solution species when the cell potential is sufficient to either promote an electron into the lowest unoccupied molecular orbital (LUMO) of the solution species (called a reduction) or to allow movement from the highest occupied molecular orbital of the solution species (HOMO) into the metal electrode (called an oxidation). In either case, the electrons involved in charge movement end up in a place offering them the lowest available energy (“electrons are lazy”). This process is illustrated in Figure 2.

Because work is being done by the metal electrode, it is commonly referred to as the working electrode. In the simplest description, the potential at which an electron transfer takes place can be related to the overall free energy change (∆G ) of the reaction by

where n is the stoichiometric number of electrons involved in the reaction and F is the Faraday constant which relates the total charge (in coulombs, C) of the reaction to the amount of product formed (96,485 C/mole for n = 1). and it has arbitrarily been assigned a half-cell potential of 0.000 V.

Electron transfers of the type just described in which electrons are transferred across the metal-solution interface with a resulting oxidation or reduction of a solution species are called faradaic processes. Study of these charge transfer reactions is the goal of most techniques in analytical electrochemistry. Unfortunately, the complexity of the interfacial system is such that even in the absence of faradaic electron transfer, other processes do occur that can affect electrode behavior. These processes include adsorption, desorption, and charging of the interface as a result of changing electrode potential. These are called nonfaradaic processes, and lead us to a short discussion of what is termed the electrical double layer.