Which of the following will not react with a grignard reagent?

The addition of a grignard reagent to a carbonyl is based on collision of a nucleophile to fill what acceptor orbital?

A) a s bonding orbital

B) a s* antibonding orbital

Which reactions will not give a product as a racemic mixture?

A) the addition of phenyl grignard to propionaldehyde

C) the addition of NaOCH3 to cyclohexene oxide

D) the acid-catalyzed addition of methanol to cyclohexene oxide

Which of the following is not a true statement:

A) a silyl ether bond can be cleaved by a fluoride source, such as TBAF

D) H2CrO4 will oxidize a secondary alcohol to a ketone

In the boxes provided, indicate whether each of the following reactive carbon atoms is considered to be electrophilic (E) or nucleophilic (N). R is used to indicate either H or alkyl.

2. (6 pts) Draw the resonance contributor for a ketone, showing any curved arrows for its formation. Briefly explain what this resonance indicates about the reactivity of a carbonyl.

The resonance structure of a carbonyl, which has a positive charge on carbon, indicates that the sp2carbon is a very good electrophile. The oxygen also has enhanced nucleophilicity and basicity as indicated by the anion.

3. (8 pts) Ethylene oxide is the starting material for the synthesis of “Cellosolve”, an important industrial solvent. Provide a curved arrow mechanism for this reaction.

Note, this was question 11.20 from recommended practice problems. 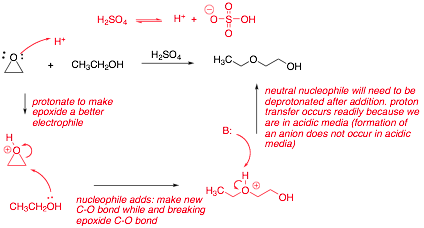 4. (8 pts) Provide a curved arrow mechanism for the following transformation. The mechanism involves an SN2 reaction followed by an elimination. There is no oxidation change of the carbon.

(10 pts) Show how to synthesize the following alcohol where all carbons in the molecule must come from compounds with 3 or fewer carbon atoms. Include all necessary reagents for the synthesis you propose.

This answer is the shortest synthesis, but there are other possible routes.

There are many correct answers to this question. Compound A is a ring-opening product that is identical to the reactivity of an epoxide.

Due to the positive charge on N, which makes a good leaving group, compound B is an elimination product and the alkene will react with Br2, which will change colors once the reaction takes place.