As discussed previously, the second law of thermodynamics argues that all processes must increase the total entropy of the universe. However, the universe if often separated into the System and the Surroundings differing changes of entropy can be observed from a system level perspective. Many processes results in an increase in a system's entropy \(\Delta S > 0\):

Some processes result in a decrease in the entropy of a system \(\Delta S < 0\):

What is the molecular basis for the above observations for the change in entropy? Let's first consider the last example, the decrease in entropy associated with a decrease in the number of gas molecules for a chemical reaction

The atoms, molecules, or ions that compose a chemical system can undergo several types of molecular motion, including translation, rotation, and vibration (Figure \(\PageIndex{2}\)). 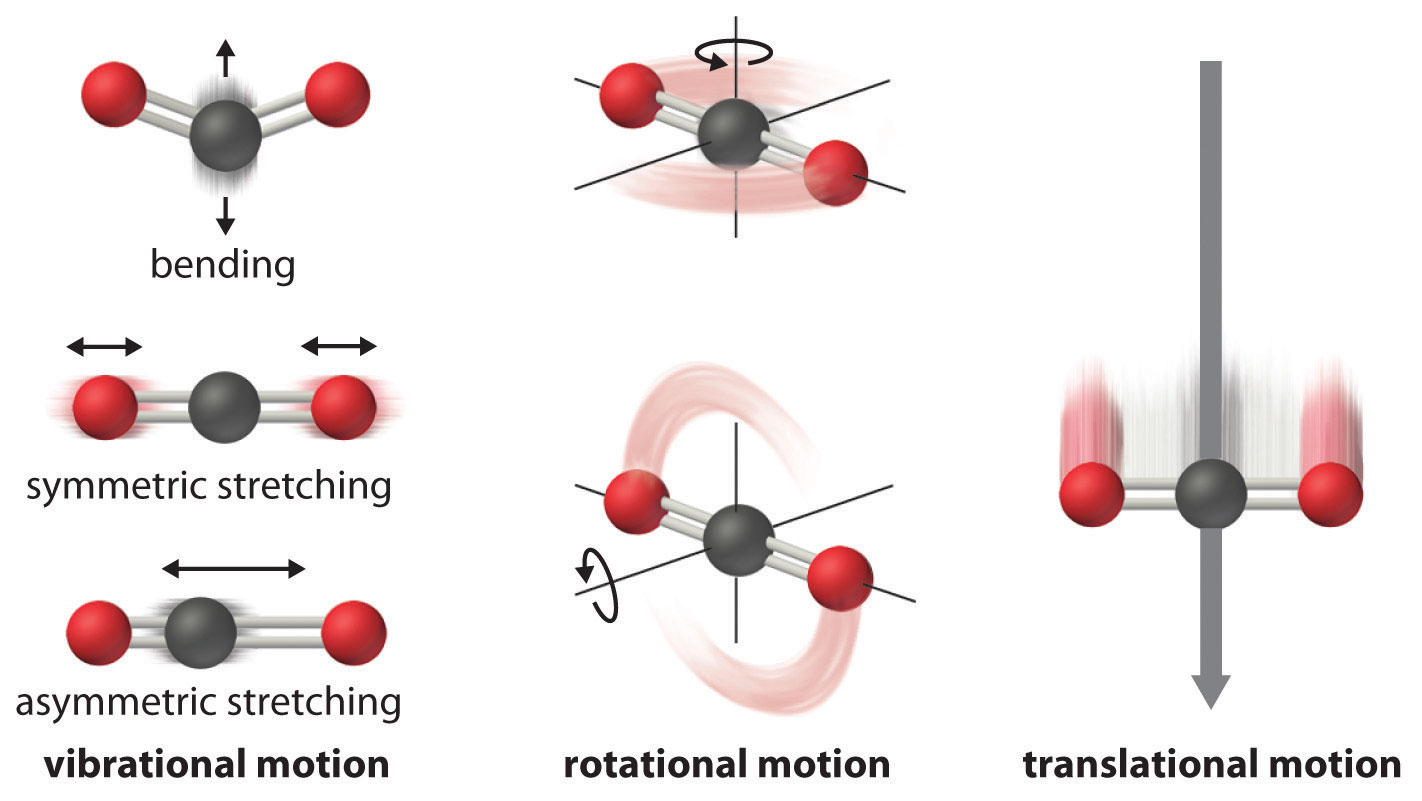 Figure \(\PageIndex{2}\): Molecular Motions. Vibrational, rotational, and translational motions of a carbon dioxide molecule are illustrated here. Only a perfectly ordered, crystalline substance at absolute zero would exhibit no molecular motion and have zero entropy. In practice, this is an unattainable ideal.

The Third Law of Thermodynamics

These forms of motion are ways in which the molecule can store energy. The greater the molecular motion of a system, the greater the number of possible microstates and the higher the entropy. A perfectly ordered system with only a single microstate available to it would have an entropy of zero. The only system that meets this criterion is a perfect crystal at a temperature of absolute zero (0 K), in which each component atom, molecule, or ion is fixed in place within a crystal lattice and exhibits no motion (ignoring quantum effects). Such a state of perfect order (or, conversely, zero disorder) corresponds to zero entropy. In practice, absolute zero is an ideal temperature that is unobtainable, and a perfect single crystal is also an ideal that cannot be achieved. Nonetheless, the combination of these two ideals constitutes the basis for the third law of thermodynamics: the entropy of any perfectly ordered, crystalline substance at absolute zero is zero.

The Third Law of Thermodynamics

The entropy of a pure crystalline substance at absolute zero (i.e. 0 Kelvin) is 0.

Since S = 0 corresponds to perfect order. The position of the atoms or molecules in the crystal would be perfectly defined

From classical kinetic theory, all motions cease at absolute zero. However things are more complicated from the more advanced (and more accurate) quantum mechanics. The Heisenberg Uncertainly Principle of quantum mechanics argues that molecules, even at absolute zero, always always have motion. Nonetheless, this motion is often ignored in the introduction of the third law of thermodynamics (which is incorrect of course).

Continued heating of a Solid Lattice

One way of calculating ΔS for a reaction is to use tabulated values of the standard molar entropy (S°), which is the entropy of 1 mol of a substance at a standard temperature of 298 K; the units of S° are J/(mol·K). Unlike enthalpy or internal energy, it is possible to obtain absolute entropy values by measuring the entropy change that occurs between the reference point of 0 K [corresponding to S = 0 J/(mol·K)] and 298 K. As shown in Table \(\PageIndex{1}\), for substances with approximately the same molar mass and number of atoms, S° values fall in the order S°(gas) > S°(liquid) > S°(solid). For instance, S° for liquid water is 70.0 J/(mol·K), whereas S° for water vapor is 188.8 J/(mol·K). Likewise, S° is 260.7 J/(mol·K) for gaseous I2 and 116.1 J/(mol·K) for solid I2. This order makes qualitative sense based on the kinds and extents of motion available to atoms and molecules in the three phases. The correlation between physical state and absolute entropy is illustrated in Figure \(\PageIndex{2}\), which is a generalized plot of the entropy of a substance versus temperature.

A closer examination of Table \(\PageIndex{1}\) also reveals that substances with similar molecular structures tend to have similar S° values. Among crystalline materials, those with the lowest entropies tend to be rigid crystals composed of small atoms linked by strong, highly directional bonds, such as diamond [S° = 2.4 J/(mol·K)]. In contrast, graphite, the softer, less rigid allotrope of carbon, has a higher S° [5.7 J/(mol·K)] due to more disorder in the crystal. Soft crystalline substances and those with larger atoms tend to have higher entropies because of increased molecular motion and disorder. Similarly, the absolute entropy of a substance tends to increase with increasing molecular complexity because the number of available microstates increases with molecular complexity. For example, compare the S° values for CH3OH(l) and CH3CH2OH(l). Finally, substances with strong hydrogen bonds have lower values of S°, which reflects a more ordered structure.

In general, the entropy is expected to increase for the following types of processes: