At the macroscopic level, a complete physical description of a sample of a gas requires four quantities:

As we demonstrated below, these variables are not independent (i.e., they cannot be arbitrarily be varied). If we know the values of any three of these quantities, we can calculate the fourth and thereby obtain a full physical description of the gas. Temperature, volume, and amount have been discussed in previous chapters. We now discuss pressure and its units of measurement.

Pressure is dependent on both the force exerted and the size of the area to which the force is applied. We know from Equation \(\ref{10.2.1}\) that applying the same force to a smaller area produces a higher pressure. When we use a hose to wash a car, for example, we can increase the pressure of the water by reducing the size of the opening of the hose with a thumb.

The units of pressure are derived from the units used to measure force and area. The SI unit for pressure, derived from the SI units for force (newtons) and area (square meters), is the newton per square meter (\(N/m^2\)), which is called the Pascal (Pa), after the French mathematician Blaise Pascal (1623–1662):

A We calculated the force as 19.6 N. When the book is lying flat, the area is

B The pressure exerted by the text lying flat is thus

A If the book is standing on its end, the force remains the same, but the area decreases:

B The pressure exerted by the text lying flat is thus

Just as we exert pressure on a surface because of gravity, so does our atmosphere. We live at the bottom of an ocean of gases that becomes progressively less dense with increasing altitude. Approximately 99% of the mass of the atmosphere lies within 30 km of Earth’s surface (Figure \(\PageIndex{1}\)). Every point on Earth’s surface experiences a net pressure called barometric pressure. The pressure exerted by the atmosphere is considerable: a 1 m2 column, measured from sea level to the top of the atmosphere, has a mass of about 10,000 kg, which gives a pressure of about 101 kPa:

Figure \(\PageIndex{1}\): Barometric Pressure. Each square meter of Earth’s surface supports a column of air that is more than 200 km high and weighs about 10,000 kg at Earth’s surface.

Barometric pressure can be measured using a barometer, a device invented in 1643 by one of Galileo’s students, Evangelista Torricelli (1608–1647). A barometer may be constructed from a long glass tube that is closed at one end. It is filled with mercury and placed upside down in a dish of mercury without allowing any air to enter the tube. Some of the mercury will run out of the tube, but a relatively tall column remains inside (Figure \(\PageIndex{2}\)). Why doesn’t all the mercury run out? Gravity is certainly exerting a downward force on the mercury in the tube, but it is opposed by the pressure of the atmosphere pushing down on the surface of the mercury in the dish, which has the net effect of pushing the mercury up into the tube. Because there is no air above the mercury inside the tube in a properly filled barometer (it contains a vacuum), there is no pressure pushing down on the column. Thus the mercury runs out of the tube until the pressure exerted by the mercury column itself exactly balances the pressure of the atmosphere. The pressure exerted by the mercury column can be expressed as: 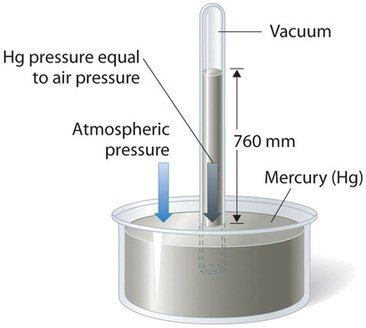 Figure \(\PageIndex{2}\): A Mercury Barometer. The pressure exerted by the atmosphere on the surface of the pool of mercury supports a column of mercury in the tube that is about 760 mm tall. Because the boiling point of mercury is quite high (356.73°C), there is very little mercury vapor in the space above the mercury column.

We are so accustomed to living under this pressure that we never notice it. Instead, what we notice are changes in the pressure, such as when our ears pop in fast elevators in skyscrapers or in airplanes during rapid changes in altitude. We make use of barometric pressure in many ways. We can use a drinking straw because sucking on it removes air and thereby reduces the pressure inside the straw. The barometric pressure pushing down on the liquid in the glass then forces the liquid up the straw.

One of the authors visited Rocky Mountain National Park several years ago. After departing from an airport at sea level in the eastern United States, he arrived in Denver (altitude 5280 ft), rented a car, and drove to the top of the highway outside Estes Park (elevation 14,000 ft). He noticed that even slight exertion was very difficult at this altitude, where the barometric pressure is only 454 mmHg. Convert this pressure to

Asked for: pressure in atmospheres and bar

Use the conversion factors in Equation \(\ref{10.2.3}\) to convert from millimeters of mercury to atmospheres and kilopascals.

The pressure in bar is given by

Mt. Everest, at 29,028 ft above sea level, is the world’s tallest mountain. The normal barometric pressure at this altitude is about 0.308 atm. Convert this pressure to

Barometers measure barometric pressure, but manometers measure the pressures of samples of gases contained in an apparatus. The key feature of a manometer is a U-shaped tube containing mercury (or occasionally another nonvolatile liquid). A closed-end manometer is shown schematically in part (a) in Figure \(\PageIndex{3}\). When the bulb contains no gas (i.e., when its interior is a near vacuum), the heights of the two columns of mercury are the same because the space above the mercury on the left is a near vacuum (it contains only traces of mercury vapor). If a gas is released into the bulb on the right, it will exert a pressure on the mercury in the right column, and the two columns of mercury will no longer be the same height. The difference between the heights of the two columns is equal to the pressure of the gas.

Suppose you want to construct a closed-end manometer to measure gas pressures in the range 0.000–0.200 atm. Because of the toxicity of mercury, you decide to use water rather than mercury. How tall a column of water do you need? (The density of water is 1.00 g/cm3; the density of mercury is 13.53 g/cm3.)

B Because water is less dense than mercury, you need a taller column of water to achieve the same pressure as a given column of mercury. The height needed for a water-filled column corresponding to a pressure of 0.200 atm is proportional to the ratio of the density of mercury to the density of water

The answer makes sense: it takes a taller column of a less dense liquid to achieve the same pressure.

Suppose you want to design a barometer to measure barometric pressure in an environment that is always hotter than 30°C. To avoid using mercury, you decide to use gallium, which melts at 29.76°C; the density of liquid gallium at 25°C is 6.114 g/cm3. How tall a column of gallium do you need if P = 1.00 atm?

The answer to Example \(\PageIndex{3}\) also tells us the maximum depth of a farmer’s well if a simple suction pump will be used to get the water out. The 1.00 atm corresponds to a column height of

A suction pump is just a more sophisticated version of a straw: it creates a vacuum above a liquid and relies on barometric pressure to force the liquid up a tube. If 1 atm pressure corresponds to a 10.3 m (33.8 ft) column of water, then it is physically impossible for barometric pressure to raise the water in a well higher than this. Until electric pumps were invented to push water mechanically from greater depths, this factor greatly limited where people could live because obtaining water from wells deeper than about 33 ft was difficult.

Pressure is defined as the force exerted per unit area; it can be measured using a barometer or manometer. Four quantities must be known for a complete physical description of a sample of a gas: temperature, volume, amount, and pressure. Pressure is force per unit area of surface; the SI unit for pressure is the pascal (Pa), defined as 1 newton per square meter (N/m2). The pressure exerted by an object is proportional to the force it exerts and inversely proportional to the area on which the force is exerted. The pressure exerted by Earth’s atmosphere, called barometric pressure, is about 101 kPa or 14.7 lb/in.2 at sea level. barometric pressure can be measured with a barometer, a closed, inverted tube filled with mercury. The height of the mercury column is proportional to barometric pressure, which is often reported in units of millimeters of mercury (mmHg), also called torr. Standard barometric pressure, the pressure required to support a column of mercury 760 mm tall, is yet another unit of pressure: 1 atmosphere (atm). A manometer is an apparatus used to measure the pressure of a sample of a gas.