There are several important pieces of information that you can obtain from an 1H-NMR. The first is the chemical shift of the peak. This will aid in identifying the type of H atom that produced the signal. The second is the integration ratios of the peaks. The area under a peak of a 1H-NMR is directly proportional to the number of H atoms that produced the peak. The area is calculated by integrating the area, done automatically for you by the software. On older spectra the integration curve was drawn on the spectra, modern software will produce this as a table attached to the spectra. The example below is for methyl t-butyl ether. 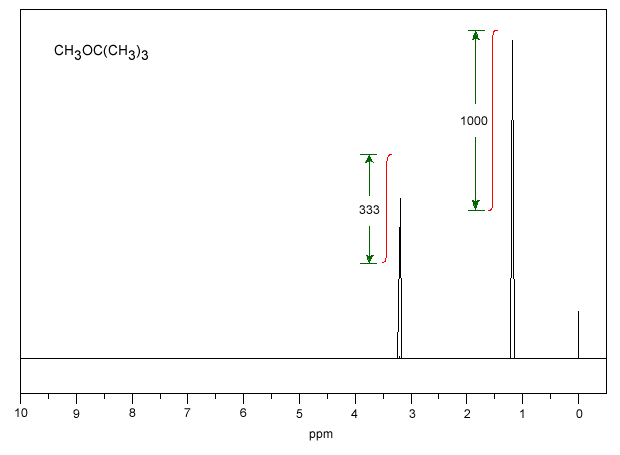 The integrals (shown as the red curves) are in a ratio of 333:1000 or 1:3. This implies that the peak on the left corresponds to the methyl group attached to the oxygen (as expected since the O will deshield the H atoms). The peak on the right is the three methyl groups of the t-butyl group, less deshielded as it is further away from the O atom. Note that we get the simplest ratio of H atom types (1:3, methyl : t-butyl) not the true ratio of 3:9.

The NMR above has absorptions which are called singlets, a single sharp peak. However, in most cases, this is not the norm. Absorptions are split into groups of peaks due to coupling between adjacent protons in the molecule.

The 1H-NMR of 1,1,2-tribromoethane is shown above (integration ratios of 10:20 or 1:2). Note that the peaks are now split into a group of two peaks on the right, a doublet and into three peaks on the left, a triplet. The relative areas under the peaks are 1:1 for the doublet, and 1:2:1 for the triplet. The triplet corresponds to the -CHBr2 (most deshielded) proton and the doublet to the -CH2Br (most shielded) protons. This also agrees with the integration.

Spin-spin splitting occurs between unique types of H atoms on the same or adjacent (vicinal) carbon atoms. This occurs because the magnetic fields of each H atom can interact with the magnetic field of other H atoms. The interaction is only important (i.e. leading to spin-spin splitting) when the H atoms are "chemically different" from one another (see preceding page).

The coupling constant, (symbol J, units Hz) is a measure of the interaction between a pair of protons.

To see the integratals, right click on the spectra to open the menu, go to "view" and check the integrate" box.