E12.2: Amines are bases, and thus the amine would simply deprotonate the carboxylic acid rather than attacking the carbonyl carbon.

E12.4: Excess acetic acid is used in order to drive the equilibrium towards product formation (by Le Chatelier’s principle).

E12.5: Base-catalyzed esterification (starting with a carboxylic and an alcohol) will not work. The base will simply deprotonate the carboxylic acid, and carboxylate groups are very unreactive towards acyl substitution reactions.

E12.6: This reaction would be described as the acid-catalyzed hydrolysis of an ester. E12.8: The leaving group in this acyl transfer reaction is a resonance-stabilized phenolate ion - the negative charge is delocalized to the carboxylate group. P12.1: A thioester (acetyl-CoA) is converted to an amide in this reaction:

P12.5: This reaction can be described as the hydrolysis of an amide.

P12.6: The second step of this epoxide-opening reaction is hydrolysis of the ester formed in the first step. The bond to the chiral carbon is not broken, thus stereochemistry is not inverted. Notice also that the oxygen from the active site aspartate residue is incorporated into the product.

a) Yes, the fact that the 18O label from the active site aspartate is incorporated into the product indicates that this residue is the ring-opening nucleophile as in the mechanism above.

b) In a hypothetical alternate mechanism, water could open the ring directly. This would result in an unlabeled product. If the water attacked at the more substituted side of the epoxide, as shown below, the result would be the enantiomer of the product that was actually observed by the investigators. 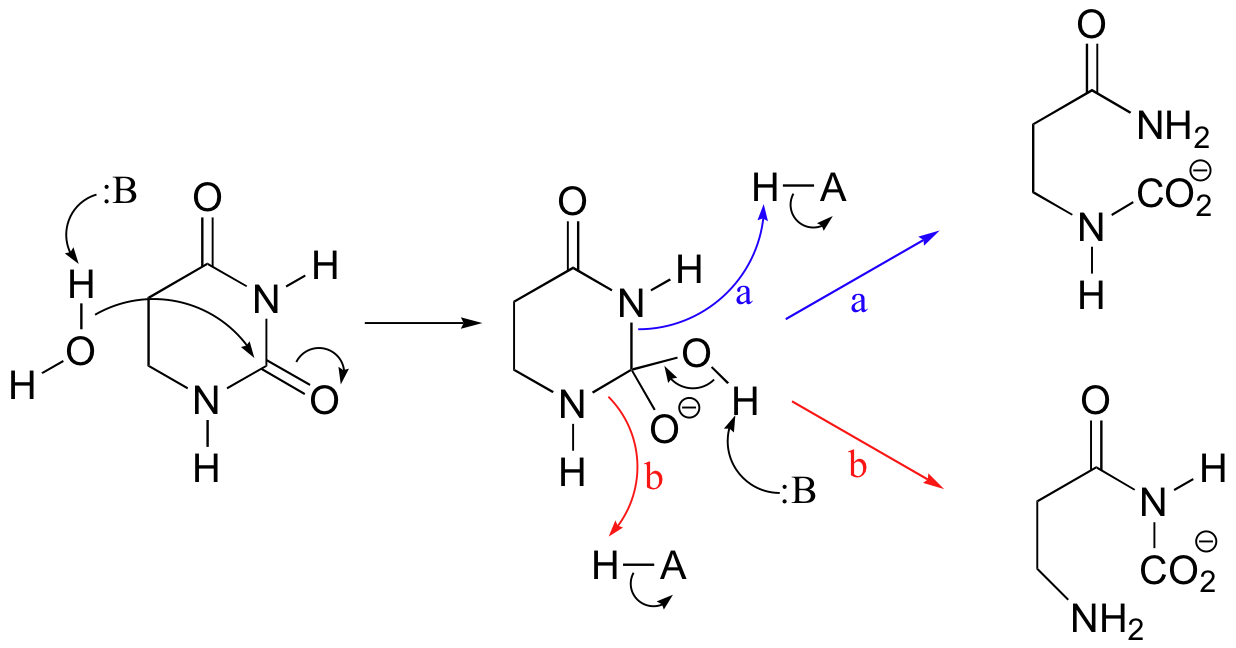 c) Very often, enzymes activate a carbonyl for nucleophilic attack by coordinating a metal cation (usually Zn2+ or Mg2+) to the carbonyl oxygen, thus withdrawing electron density and increasing the electrophilicity of the carbon. P12.15: The formate molecule is first converted to an acyl phosphate at the expense of one ATP. The formate is now activated for an acyl transfer reaction. 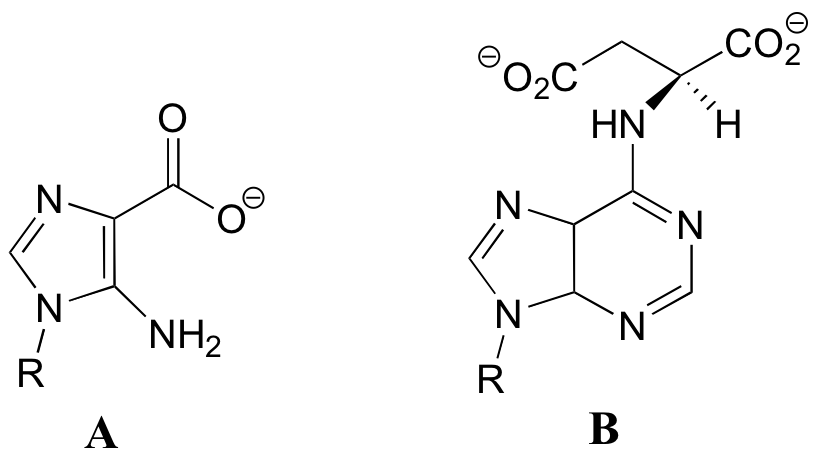 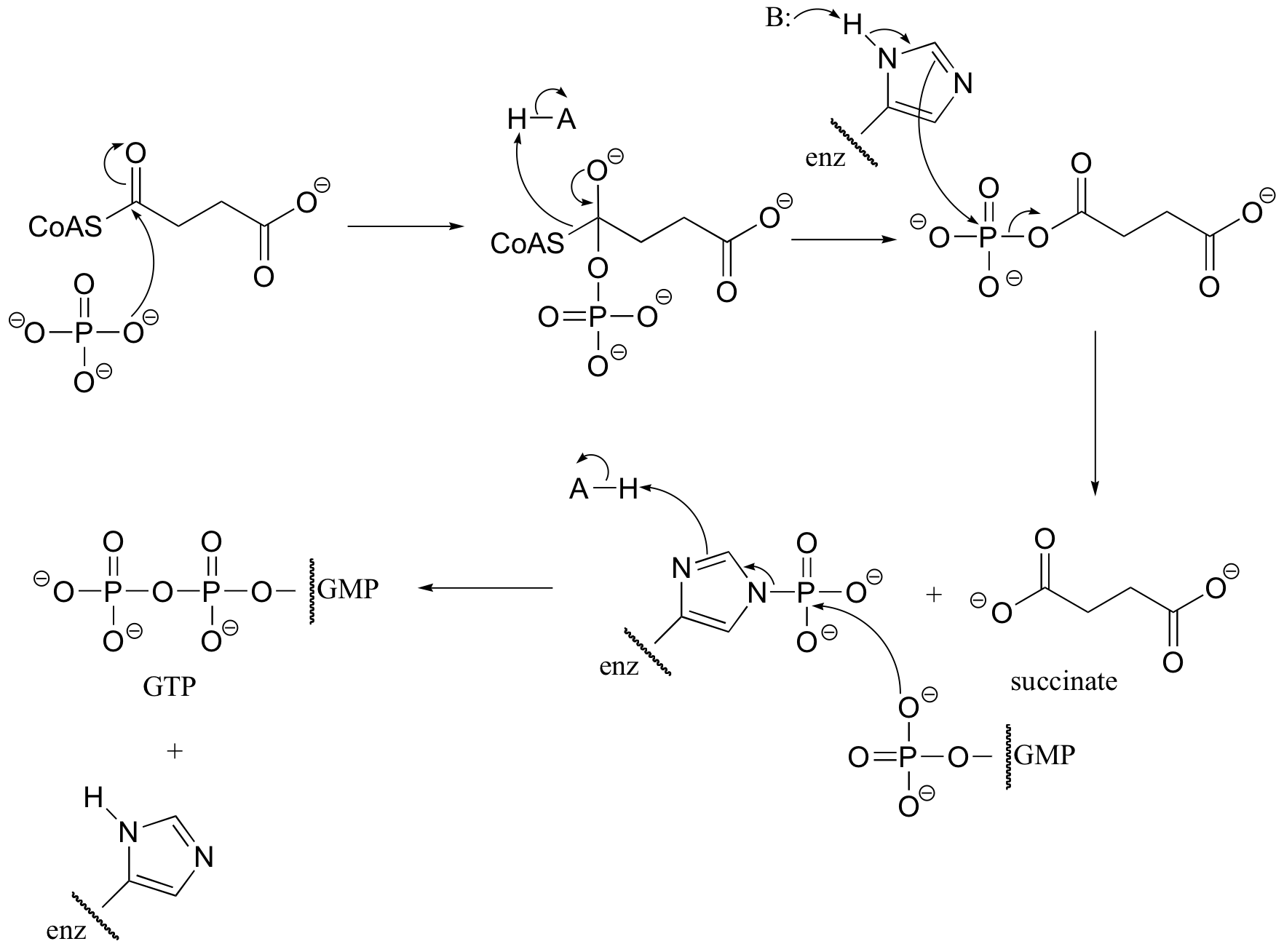 a) The cysteine could attack the 14C atom, with subsequent loss of N2 gas (this would be a very entropically favored step - we will see similar reaction types when we study decarboxylation mechanisms). This process would result in the 14C label becoming attached to the active site cysteine. b) The cysteine could also attack the carbonyl carbon, in what is essentially an acyl transfer reaction. In this case, the cysteine would not receive the radioactive 14C label. 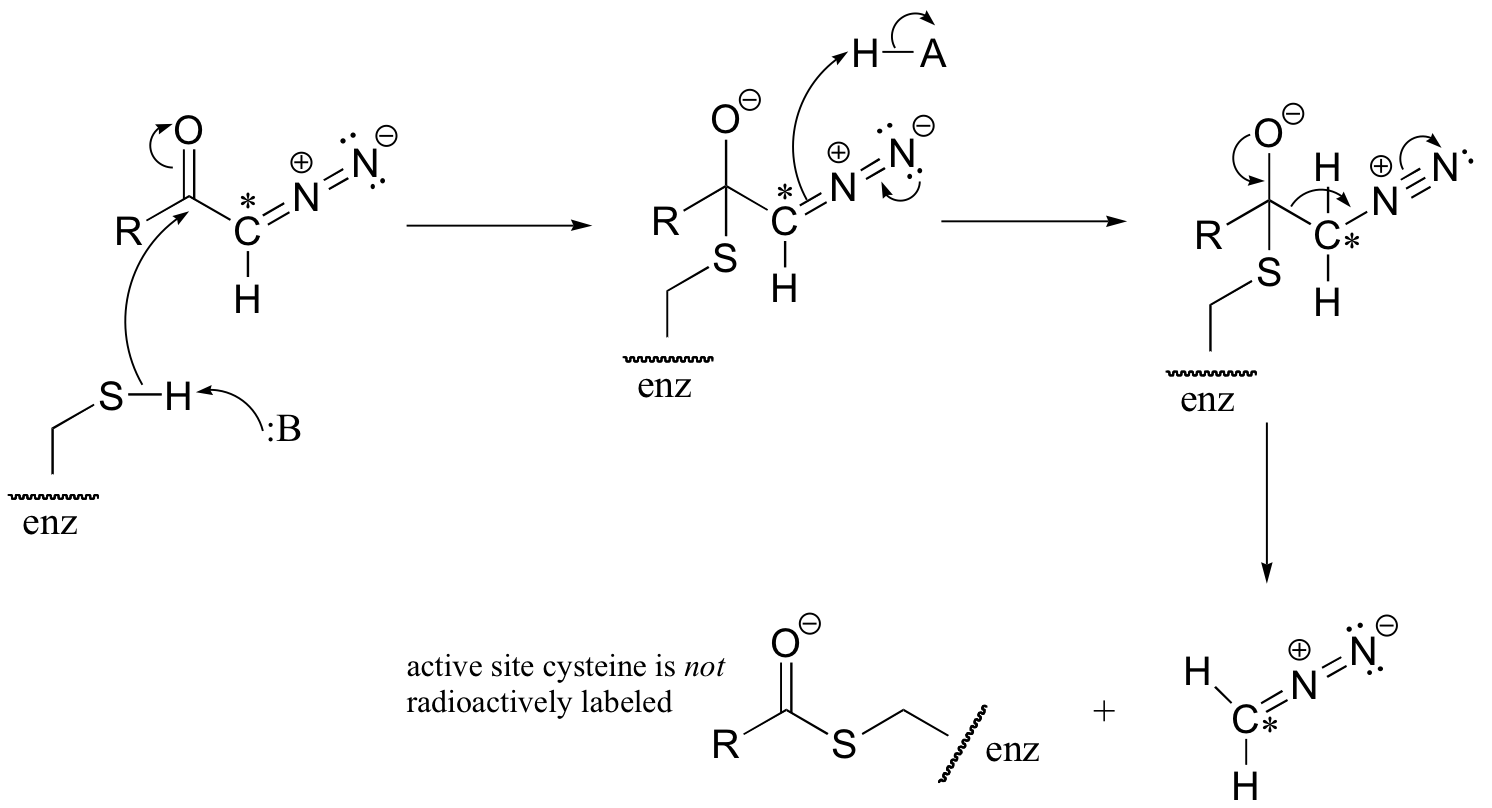