As discussed in the previous section SN1 reactions follow first order kinetics due to a multi-step mechanism in which the rate-determining step consists of the ionization of the alkyl halide to form a carbocation. 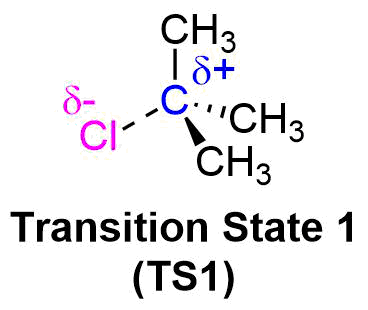 In Section 7-9,  the stability of alky carbocations was shown to be 3o > 2o > 1o > methyl.  Two special cases of resonance-stabilized carbocation, allyl and benzyl, must be considered and added ot the list.  The delocalization of the positive charge over an extended p orbital system allows for allyl and benzyl carbocations to be exceptionally stable.  The resonance hybrid of an allyic cation is made up of two resonance forms while the resonance hybrid of the benzylic carbocaton is made up of five. Under acidic conditions, the -OH group of an alcohol can be converted into a neutral water leaving group through protonation.  As discussed in Section 10-5, this occurs during the conversion of a tertiary alcohol to an alkyl halide through reaction with HCl or HBr.  Because the -OH group itself is a poor nucleophile, the mechanism starts with its protonation to form a hydronium ion.  Neutral water is then lost as a leaving group to create the carbocation intermediate which then reacts with the halide ion nucleophile to provide the alkyl halide product.  This reaction works best when a tertiary alcohol is used because it produces a stable carbocation intermediate.

Since nucleophiles only participate in the fast second step, their relative molar concentrations rather than their nucleophilicities should be the primary product-determining factor. If a nucleophilic solvent such as water is used, its high concentration will assure that alcohols are the major product. Recombination of the halide anion with the carbocation intermediate simply reforms the starting compound. Note that SN1 reactions in which the nucleophile is also the solvent are commonly called solvolysis reactions.  The SN1 reaction of allyl bromide in methanol is an example of what we would call methanolysis, while if water is the solvent the reaction would be called hydrolysis:

Since the hydrogen atom in a polar protic solvent is highly positively charged, it can interact with the anionic nucleophile which would negatively affect an SN2 , but it does not affect an SN1 reaction because the nucleophile is not a part of the rate-determining step. Polar protic solvents actually speed up the rate of the unimolecular substitution reaction because the large dipole moment of the solvent helps to stabilize the carbocation-like transition state.  Since the carbocation is unstable, anything that can stabilize this even a little will speed up the reaction. 7. Rank the following by increasing reactivity in an SN1 reaction.

8. 3-bromo-1-pentene and 1-bromo-2-pentene undergo SN1 reaction at almost the same rate, but one is a secondary halide while the other is a primary halide. Explain why this is.

9. Label the following reactions as most likely occuring by an SN1 or SN2 mechanism. Suggest why. 10. Give the solvolysis product expected when the compound is heated in methanol.

11.  Predict whether each compound below would be more likely to undergo a SN2 or SN1 reaction.

12.  Show how each compound may be synthesized using nucleophilic substitution reactions.

7. Consider the stability of the intermediate, the carbocation.

8.  They have the same intermediates when you look at the resonance forms.