After completing this section, you should be able to explain the “unusual” products formed in certain reactions in terms of the rearrangement of an intermediate carbocation.

Whenever possible, carbocations will rearrange from a less stable isomer to a more stable isomer. This rearrangement can be achieved by either a hydride shift, where a hydrogen atom migrates from one carbon atom to the next, taking a pair of electrons with it; or an alkyl shift, in which an alkyl group undergoes a similar migration, again taking a bonding pair of electrons with it. These migrations usually occur between neighbouring carbon atoms, and hence are termed 1,2-hydride shifts or 1,2-alkyl shifts.

[A hydride ion consists of a proton and two electrons, that is, [H:]−. Hydride ions exist in compounds such as sodium hydride, NaH, and calcium hydride, CaH2.]

An electrophilic reaction such as HX with an alkene will often yield more than one product. This is strong evidence that the mechanism includes intermediate rearrangement steps of the cation.

Throughout this textbook many reaction mechanisms will be presented. It is impossible to know with absolute certainty that a mechanism is correct. At best a proposed mechanism can be shown to be consistent with existing experimental data. Virtually all of the mechanisms in this textbook have been carefully studied by experiments designed to test their validity although the details are not usually discussed. An excellent example of experimental evidence which supports the carbocation based mechanism for electrophilic addition, is that structural rearrangements often occur during the reaction.

A 1,2-hydride shift is a carbocation rearrangement in which a hydrogen atom in a carbocation migrates to the carbon atom bearing the formal charge of +1 (carbon 2 in the example below) from an adjacent carbon (carbon 1).

An example of this structural rearrangment occurs during the reaction of 3-methyl-1-butene with HBr. Markovnikov's rule predicts that the preferred product would be 2-bromo-3-methylbutane, however, very little of this product forms. The predominant product is actually 2-bromo-2-methylbutane.

This result comes from a Hydride Shift during the reaction mechanism. The mechanism begins with protonation of the alkene which places a positive charge on the more alkyl substituted double bond carbon resulting in a secondary carbocation. In step 2, The electrons in the C-H bond on carbon #3 are attracted by the positive charge on carbon #2, and they simply shift over to fill the carbocation's empty p orbital, pulling the proton over with them. The process called a carbocation rearrangement, and more specifically, a hydride shift. A hydride ion (H:-) is a proton plus two electrons which not to be confused with H+, which is just a proton without any electrons. Notice that the hydride, in shifting, is not acting as an actual leaving group - a hydride ion is a very strong base and a very poor leaving group. What is the thermodynamic driving force for this process? Notice that the hydride shift results in the conversion of a secondary carbocation (on carbon 2) to a (more stable) tertiary carbocation (on carbon 3) - a thermodynamically downhill step. As it turns out, the shift occurs so quickly that it is accomplished before the bromide nucleophile has time to attack at carbon #2. Rather, the bromide will attack after the hydride shift (step 3) at carbon #3 to complete the addition.

A 1,2-alkyl shift is a carbocation rearrangement in which an alkyl group migrates to the carbon atom bearing the formal charge of +1 (carbon 2) from an adjacent carbon atom (carbon 1), e.g.

Notice that in the observed product, the carbon framework has been rearranged: a methyl carbon has been shifted. This is an example of another type of carbocation rearrangement, called an alkyl shift or more specifically a methyl shift. Predicting the Product of a Carbocation Rearrangement

Carbocation shifts occur in many more reactions than just electrophilic additions as some of which will be discussed in subsequent chapters of this textbook. Whenever a carbocation is produced in a reaction's mechanism the possibility of rearrangements should be considered. As discussed in Section 7.9, there are multiple ways to stabilize a carbocation all of which could induce a rearrangement.

The most common situation for a rearrangement to occur during electrophilic addition is:

A 2o Carbocation with a 3o or 4o Alkyl Substituent

Draw the expectred produts of the following reaction.

Carbocation rearrangements are involved in many known biochemical reactions. Rearrangements are particularly important in carbocation-intermediate reactions in which isoprenoid molecules cyclize to form complex multi-ring structures. For example, one of the key steps in the biosynthesis of cholesterol is the electrophilic cyclization of oxidosqualene to form a steroid called lanosterol.

This complex but fascinating reaction has two phases. The first phase is where the actual cyclization takes place, with the formation of four new carbon-carbon bonds and a carbocation intermediate. The second phase involves a series of hydride and methyl shifts culminating in a deprotonation. In the exercise below, you will have the opportunity to work through the second phase of the cyclase reaction mechanism. 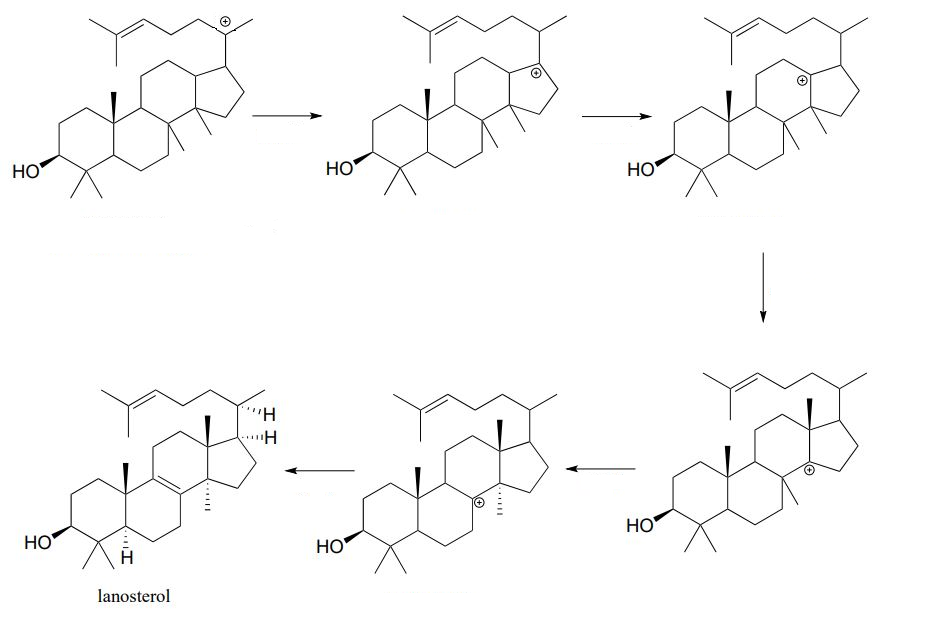 1) The following reaction shows a rearrangement within the mechanism. Propose a mechanism that shows this.

2) Propose a mechanism for the following reaction. It involves an electrophilic addition and the shift of a C-C and a C-H bond. 2) In most examples of carbocation rearrangements that you are likely to encounter, the shifting species is a hydride or methyl group. However, pretty much any alkyl group is capable of shifting. Sometimes, the entire side of a ring will shift over in a ring-expanding rearrangement.

The first 1,2-alkyl shift is driven by the expansion of a five-membered ring to a six-membered ring, which has slightly less ring strain. A hydride shift then converts a secondary carbocation to a tertiary carbocation, which is the electrophile ultimately attacked by the bromide nucleophile.