You may wish to review the discussion of acid-base theory given in Sections 2.7-2.11.

Both aryl and vinylic halides are relatively unreactive in SN2 displacement mechanisms, mostly because during the backside attack of the molecule the incoming nucleophile is sterically hindered by both substituents and electron density from any double bonds present. Also, leaving groups on sp2-hybridized carbons tend to be held tighter than sp3-hybridized carbons.

Solvation may be defined as the interaction between molecules of solvent and particles of solute. The result of solvation is to stabilize (i.e., lower the energy of) the solute particles. Solvents with lone pairs of electrons are good at solvating cations. Protic (i.e., hydroxylic) solvents are able to solvate anions through hydrogen bonding. As water has two lone pairs of electrons and is also protic, it is good at solvating both anions and cations. Steric hindrance about the electrophilic carbon, is one of the most important factors Determining the rate of SN2 reactions. Although the substrate, in the case of nucleophilic substitution of haloalkanes, is considered to be the entire molecule circled below we are most interested in the electrophilic carbon that bears the leaving group.

The SN2 transition state is very crowded. Recall that there are a total of five groups around the electrophilic center, the nucleophile, the leaving group, and three substituents.

Vinyl and aryl halides are unreactive toward SN2 displacement due to extreme steric factors. To perform an SN2 reaction, the incoming nucleophile would have to enter the plane of the C-C double bond and move through the molecule to achieve the backside displacement required.

In addition to alkyl groups being added to the electrophilic carbon, it turns out that the addition of substitutes on neighboring carbons will slow nucleophilic substitution reactions as well.

Some confusion in distinguishing basicity (base strength) and nucleophilicity (nucleophile strength) is inevitable. Since basicity is a less troublesome concept; it is convenient to start with it. Basicity refers to the ability of a base to accept a proton. Basicity may be related to the pKa of the corresponding conjugate acid, as shown below. The strongest bases have the weakest conjugate acids and vice versa. The range of basicities included in the following table is remarkable, covering over fifty powers of ten! In general, as the pKa of the conjugate acid increases the base becomes a stronger nuclophile. This, however, is not always the case.

The versatility of the SN2 reaction is shown by the wide variety of functional groups which can be formed.

The reasoning behind the horizontal nucleophilicity trend is the same as the reasoning behind the basicity trend: more electronegative elements hold their electrons more tightly, and are less able to donate them to form a new bond. This horizontal trend also tells us that amines are more nucleophilic than alcohols, although both groups commonly act as nucleophiles in both laboratory and biochemical reactions.

As Size Increases, Basicity Decreases: In general, if we move from the top of the periodic table to the bottom of the periodic table as shown in the diagram below, the size of an atom will increase. As size increases, basicity will decrease, meaning a species will be less likely to act as a base; that is, the species will be less likely to share its electrons and act as a nucleophile. 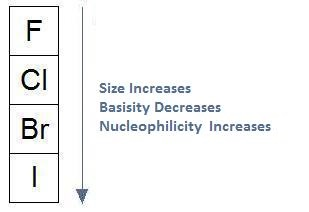 Influence of the Solvent in an SN2 Reaction Below are several polar aprotic solvents that are commonly used in the laboratory:

There are four main factors which affect SN2 reaction:

1) What product(s) do you expect from the reaction of 1-bromopentane with each of the following reagents in an SN2 reaction?

Which in the following pairs is a better nuceophile?

3) Order the following in increasing reactivity for an SN2 reaction.

4) Solvents benzene, ether, chloroform are non-polar and not strongly polar solvents. What effects do these solvents have on an SN2 reaction?

5) Predict the products of these nucleophilic substitution reactions, including stereochemistry when appropriate.

6) Predict which compound in each pair would undergo the SN2 reaction faster.

a) (CH3CH2)2N- as there is a charge present on the nitrogen.

b) (CH3CH2)3N because a lone pair of electrons is present.

4) They will decrease the reactivity of the reaction.