The IUPAC name for malic acid is 2-hydroxybutanedioic acid. This acid is produced by apples, a fact which seems to have been appreciated by the British novelist Thomas Hardy in The Woodlanders:

Up, upward they crept, a stray beam of the sun alighting every now and then like a star on the blades of the pomace-shovels, which had been converted to steel mirrors by the action of the malic acid.

In 1896, the German chemist Paul Walden discovered that he could interconvert pure enantiomeric (+) and (-) malic acids through a series of reactions. This conversion meant that there was some kind of change in the stereochemistry made during the series of reactions. First, (−)-malic acid was reacted with phosphorus pentachloride (PCl5) to provide (+)-chlorosuccinic acid. 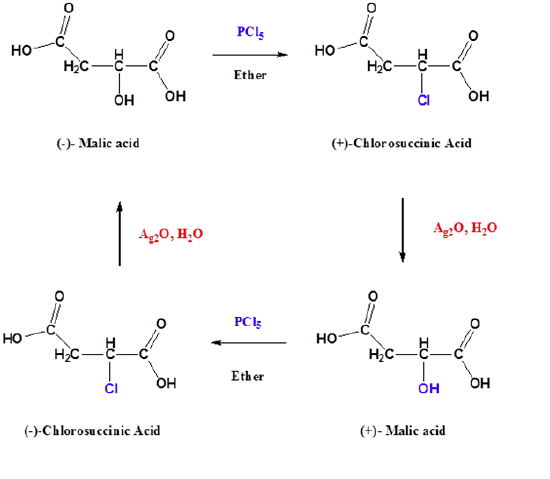 These results were considered astonishing. The fact that (−)-malic acid was converted into (+)-malic acid meant that the configuration of the chiral center has somehow been changed during the reaction series.

These reactions are currently referred to as nucleophilic substitution reactions because each step involves the substitution of one nucleophile by another. These are among the most common and versatile reaction types in organic chemistry.

Further investigations into these reaction were undertaken during the 1920's and 1930's to clarify the mechanism and clarify how the inversion of configurations occur. These reactions involved nucleophilic substitution of an alkyl p-toluenesulfonate (called a tosylate group). For this purpose the tosylate groups act similarly to a halogen substituent. In the series of reactions (+)-1-phenyl-2-propanol is interconverted with (-)-1-phenyl-2-propanol.

1) Predict the product of a nucleophilic substitution of (S)-2-bromopentane reacting with CH3CO2-, Show stereochemistry.