Hemoglobin is a complex protein which has a quaternary structure and contains iron. There are four subunits in the hemoglobin molecule - two alpha subunits and two beta subunits. Each subunit contains one iron ion, whose oxidation state changes from \(+2\) to \(+3\) and back again, depending upon the environment around the iron. When oxygen binds to the iron, the three-dimensional shape of the molecule changes. Upon release of the oxygen to the cells, the shape changes again.

With hemoglobin of normal structure, this shift in conformation does not present any problems. However, individuals with hemoglobin S do experience serious complications. This hemoglobin has one amino acid in the two beta chains that is different from the amino acid at that point in the primary structure of normal hemoglobin. The result of this one structural change is aggregation of the individual protein molecules when oxygen is released. Adjacent hemoglobin molecules come in contact with one another and clump up, causing the red cells to deform and break.

This abnormality, known as sickle cell, is genetic in nature. A person may inherit the gene from one parent and have sickle cell trait (only some of the hemoglobin is hemoglobin S), which is usually not life-threatening. Inheriting the gene from both parents will result in sickle cell disease, a very serious condition.

A polypeptide is a sequence of amino acids between ten and one hundred in length. A protein is a peptide that is greater than one hundred amino acids in length. Proteins are very prevalent in living organisms. Hair, skin, nails, muscles, and the hemoglobin in red blood cells are some of the important parts of your body that are made of different proteins. The wide array of chemical and physiological properties of proteins is a function of their amino acid sequences. Since proteins generally consist of one hundred or more amino acids, the number of amino acid sequences that are possible is virtually limitless.

The tertiary structure is the overall three-dimensional structure of the protein. A typical protein consists of several sections of a specific secondary structure (alpha helix or beta sheet) along with other areas in which a more random structure occurs. These areas combine to produce the tertiary structure. The tertiary structure is stabilized by forces similar to the intermolecular forces previously seen between molecules. These attractive forces include London dispersion forces (hydrophobic), hydrogen bonding, dipole-dipole forces, ion-dipole interactions, ionic salt bridges, and disulfide bonds (see figure below). 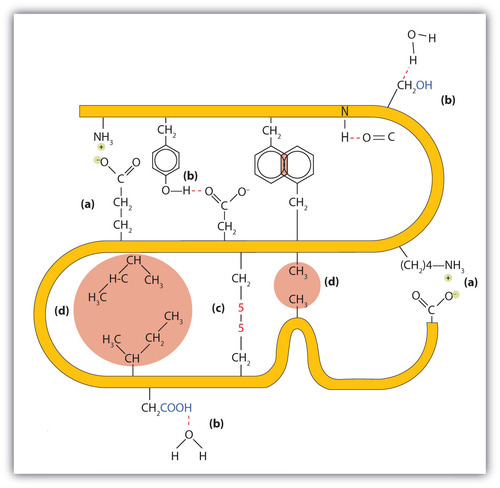 Hemoglobin is a very large protein found in red blood cells and whose function is to bind and carry oxygen throughout the bloodstream. Hemoglobin consists of four subunits - two \(\alpha\) subunits (yellow) and two \(\beta\) subunits (gray) - which then come together in a specific and defined way through interactions of the side chains (see figure below). Hemoglobin also contains four iron atoms, located in the middle of each of the four subunits. The iron atoms are part of a structure called a porphyrin, shown in red in the figure.

Some proteins consist of only one subunit and thus do not have a quaternary structure. The figure below diagrams the interaction of the four levels of protein structure.

The highly organized structures of proteins are truly masterworks of chemical architecture. But highly organized structures tend to have a certain delicacy, and this is true of proteins. Denaturation is the term used for any change in the three-dimensional structure of a protein that renders it incapable of performing its assigned function. A denatured protein cannot do its job because there is a change in the secondary, tertiary, or quaternary structure (see figure below). A wide variety of reagents and conditions, such as heat, organic compounds, pH changes, and heavy metal ions can cause protein denaturation. Anyone who has fried an egg has observed denaturation. The clear egg white turns opaque as the albumin denatures and coagulates.

There are a variety of ways to denature proteins including those below.

If you have ever had a hair permanent or chemically straightened your hair, the process involved the denaturation of proteins. The reducing agent (usually an ammonium compound) breaks the disulfide bonds in the hair. The hair is then curled or straightened which aligns the amino acids in a different pattern. An oxidizing agent is applied and the disulfide bonds reform between different amino acids. The change is permanent for the hair that you have at the time but new hair growing in will have the structure of the original proteins and your hair is back to its normal state.