After completing this section, you should be able to design a multistep synthesis to prepare a given product from a given starting material, using any of the reactions introduced in the textbook up to this point.

You should have noticed that some of the assigned problems have required that you string together a number of organic reactions to convert one organic compound to another when there is no single reaction to achieve this goal. Such a string of reactions is called an “organic synthesis.” One of the major objectives of this course is to assist you in designing such syntheses. To achieve this objective, you will need to have all of the reactions described in the course available in your memory. You will need to recall some reactions much more frequently than others, and the only way to master this objective is to practise. The examples given in this chapter will be relatively simple, but you will soon see that you can devise some quite sophisticated syntheses using a limited number of basic reactions. Once again there is an increase in the carbon chain length indicating an acetylide SN2 reaction with an alkyl halide similar to the first example. The hydrohalogenation can be subtle to discern because the hydrogen atoms are not shown in bond-line structures. Comparing the chemical formulas of 1-butyne with 1,2-dibromobutane, there is a difference of two H atoms and two Br atoms indicating hydrohalogenation and not halogenation. The addition of both bromine atoms to the same carbon atom also supports the idea that hydrohalogenation occurs on an alkyne and not an alkene. The formation of the geminal dihalide also indicates hydrohalogenation instead of halogenation because halogenation produces vicinal dihalides. With this insight, the retro-synthesis indicates the following series of chemical transformations.

Working forwards, we specify the reagents needed for each reaction. For the initial free-radical halogenation of the alkane, we have the option of chlorine (Cl2) or bromine (Br2). Because methylcyclohexane has several different classifications of carbons, the selectivity of Br2 is more important than the faster reactivity of Cl2. A strong base with heat can be used for the second step to follow an E2 mechanism and form 1-methylcyclohexene. The aldehyde group on the final product indicates gentle oxidative cleavage by any of several reaction pathways. These reactions can be combined in to the following multi-step synthesis. 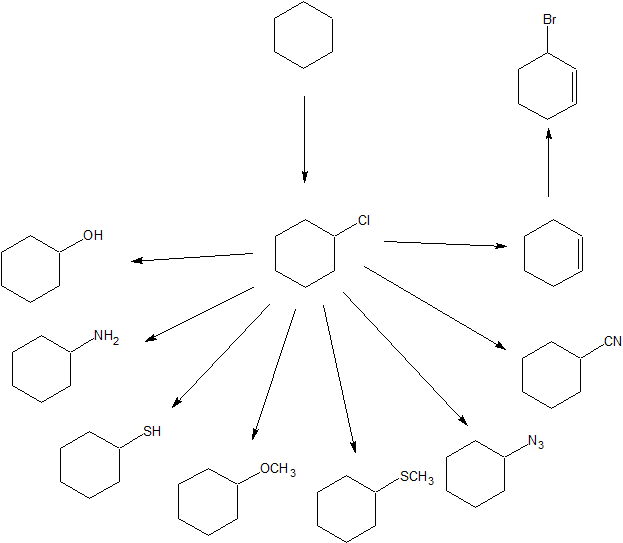 3) Show how you would accomplish the following synthetic transformations.