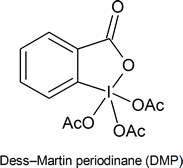 The general idea of oxidation and reduction reactions learned in general chemistry is that when a compound or atom is oxidized it loses electrons, and when it is reduced it gains electrons. In order, to keep track of electrons in organic molecules a oxidation state formalism is used. Oxidation states to not represent the actual charge but it will allow the number of electrons being gained or lost by a particular atom during a reaction.

Oxidation and reduction reactions always occurs in tandem: when one compound is oxidized, another compound must be reduced. For an alcohol to be oxidized in a reaction there must also be a compound being reduced. This reduced compound is also called the oxidizing agent. For example, chromium trioxide (CrO3) is a common oxidizing agent used by organic chemists to oxidize a secondary alcohol to a ketone. During this reaction CrO3 is being reduced to form H2CrO3. A common method for oxidizing secondary alcohols to ketones uses chromic acid (H2CrO4) as the oxidizing agent. Chromic acid, also known as Jones reagent, is prepared by adding chromium trioxide (CrO3) to aqueous sulfuric acid.

There are many biological oxidations that convert a primary or secondary alcohol to a carbonyl compound. These reactions cannot possibly involve the extreme pH conditions and vigorous inorganic oxidants used in typical laboratory oxidations. Rather, they occur at nearly neutral pH values and they all require enzymes as catalysts, which for these reactions usually are called dehydrogenases. An important group of biological oxidizing agents includes the pyridine nucleotides, of which nicotinamide adenine dinucleotide (NAD+) is an example. This very complex molecule functions to accept hydride (H:-) or the equivalent (H++ 2e−) from the α carbon of an alcohol. The reduced form of NAD+ is abbreviated as NADH and the H:- is added at the 4-position of the pyridine ring. It is important to note that the hydride adds exclusively to the Re face of the pyridine ring giving NADH a pro-R stereochemistry. From an outside source. Convert mechanism to use lactic acid.

Another example is provided by one of the steps in metabolism by way of the Krebs citric acid cycle, is the oxidation of L﻿-2-hydroxy-butanedioic (L-malic) acid to 2-oxobutanedioic (oxaloacetic) acid. This enzyme functions only with L-malic acid:

Draw the alcohol that the following ketones/aldehydes would have resulted from if oxidized. What oxidant could be used?

Show the products of the oxidation of 1-propanol and 2-propanol with chromic acid in aqueous solution.

Show the products of the oxidation of 1-propanol and 2-propanol with Dess-Martin periodinane.