Thus, there are actually more than two competing mechanisms occurring at once here. In addition to unimolecular and bimolecular substitution, a reaction involving deprotonation is also possible.

Draw a mechanism for the elimination reaction above. Assume the reaction is bimolecular.

The mechanism of an elimination reaction is almost exactly the same as an aliphatic nucleophilic substitution, except that the nucelophile misses its mark. It hits a proton instead of a carbon and acts as a base instead of a nucleophile. This process can happen at the same time as the leaving group's departure or it can happen afterwards. These mechanisms are called E1 and E2.

Draw another mechanism for the elimination reaction above, but this time, suppose the reaction is unimolecular.

Given the mechanism in NS12.2., other products would also be expected.

Typically, strong bases and very strong bases are more likely to react via the E2 mechanism; they react so quickly that the deprotonation step triggers C-LGp ionization, rather than the other way around. However, E1 mechanisms also occur with these bases, especially at low concentrations. Explain why.

Why is it that an anion such as cyanide is a weak base, whereas CH3Li is a strong base? Give two reasons.

Another factor is sterics. The more crowded the electyrophile, the more likely the nucleophile will encounter a proton on its way to the electrophilic carbon.

As a nucleophile approaches tert-butyl bromide, coming from the side opposite the bromine in order to undergo nucleophilic substitution, it is pretty likely to collide with a proton on its way to the electrophilic carbon. The same thing has a good chance of happening with iso-propyl bromide. However, it is much less likely to happen with bromoethane. Finally, bromomethane doesn't even have a beta-hydrogen, so the chance of elimination in that case is zero.

Given the following pairs of nucleophiles, which one is more likely to undergo elimination? 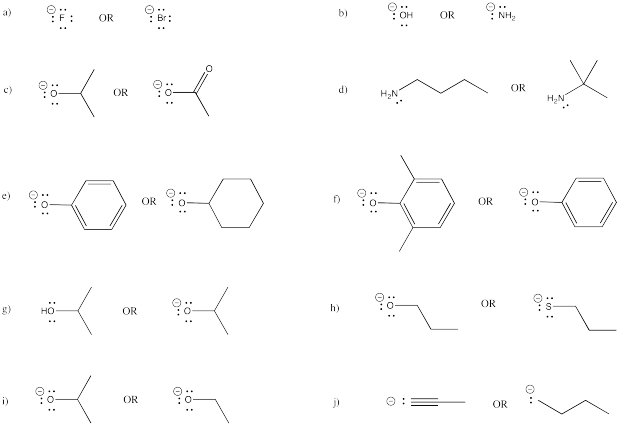 An additional factor in the energy dependence of eliminations and substitutions is entropy.