This page looks at the oxidation of alcohols using acidified sodium or potassium dichromate(VI) solution. This reaction is used to make aldehydes, ketones and carboxylic acids, and as a way of distinguishing between primary, secondary and tertiary alcohols.

Oxidizing the different types of alcohols

Both of these are used along with H2SO4, H2O

First you have to be sure that you have actually got an alcohol by testing for the -OH group. You would need to show that it was a neutral liquid, free of water and that it reacted with solid phosphorus(V) chloride to produce a burst of acidic steamy hydrogen chloride fumes. You would then add a few drops of the alcohol to a test tube containing potassium dichromate(VI) solution acidified with dilute sulfuric acid. The tube would be warmed in a hot water bath.

Picking out the tertiary alcohol

In the case of a primary or secondary alcohol, the orange solution turns green. With a tertiary alcohol there is no color change. After heating:

Distinguishing between the primary and secondary alcohols

You need to produce enough of the aldehyde (from oxidation of a primary alcohol) or ketone (from a secondary alcohol) to be able to test them. There are various things which aldehydes do which ketones don't. These include the reactions with Tollens' reagent, Fehling's solution and Benedict's solution, and are covered on a separate page.

These tests can be a bit of a bother to carry out and the results are not always as clear-cut as the books say. A much simpler but fairly reliable test is to use Schiff's reagent. Schiff's reagent is a fuchsin dye decolorized by passing sulfur dioxide through it. In the presence of even small amounts of an aldehyde, it turns bright magenta.

It must, however, be used absolutely cold, because ketones react with it very slowly to give the same color. If you heat it, obviously the change is faster - and potentially confusing. While you are warming the reaction mixture in the hot water bath, you can pass any vapours produced through some Schiff's reagent.

Because of the color change to the acidified potassium dichromate(VI) solution, you must therefore have a secondary alcohol. You should check the result as soon as the potassium dichromate(VI) solution turns green - if you leave it too long, the Schiff's reagent might start to change color in the secondary alcohol case as well. 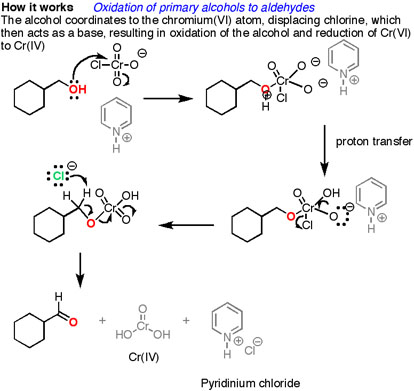 The first step is attack of oxygen on the chromium to form the Cr-O bond. Secondly, a proton on the (now positive) OH is transferred to one of the oxygens of the chromium, possibly through the intermediacy of the pyridinium salt. A chloride ion is then displaced, in a reaction reminiscent of a 1,2 elimination reaction, to form what is known as a chromate ester.

The C-O double bond is formed when a base removes the proton on the carbon adjacent to the oxygen. [aside: I've drawn the base as Cl(-) although there are certainly other species which could also act as bases here (such as an alcohol). It is also possible for pyridine to be used as the base here, although only very low concentrations of the deprotonated form will be present under these acidic conditions.] The electrons from the C-H bond move to form the C-O bond, and in the process break the O-Cr bond, and Cr(VI) becomes Cr(IV) in the process (drawn here as O=Cr(OH)2 ).