Functional groups are small groups of atoms that exhibit a characteristic reactivity. A particular functional group will almost always display its distinctive chemical behavior when it is present in a compound. Because of their importance in understanding organic chemistry, functional groups have specific names that often carry over in the naming of individual compounds incorporating the groups.

Often when drawing organic structures, chemists find it convenient to use the letter 'R' to designate part of a molecule outside of the region of interest. If we just want to refer in general to a functional group without drawing a specific molecule, for example, we can use 'R groups' to focus attention on the group of interest:

The 'R' group is a convenient way to abbreviate the structures of large biological molecules, especially when we are interested in something that is occurring specifically at one location on the molecule.

The simplest functional group in organic chemistry (which is often ignored when listing functional groups) is called an alkane, characterized by single bonds between two carbons and between carbon and hydrogen. Some examples of alkanes include methane, CH4, is the natural gas you may burn in your furnace or on a stove. Octane, C8H18, is a component of gasoline.

Functional Groups with Carbon Single Bonds to other Atoms

When the carbon of an alkane is bonded to one or more halogens, the group is referred to as a alkyl halide or haloalkane. The presence of a halogen atom (F, Cl, Br, or I), is often represented by X due to the similar chemistry of halogens. Chloroform is a useful solvent in the laboratory, and was one of the earlier anesthetic drugs used in surgery. Chlorodifluoromethane was used as a refrigerant and in aerosol sprays until the late twentieth century, but its use was discontinued after it was found to have harmful effects on the ozone layer. Bromoethane is a simple alkyl halide often used in organic synthesis. Alkyl halides groups are quite rare in biomolecules.

In the alcohol functional group, a carbon is single-bonded to an OH group (the OH group, by itself, is referred to as a hydroxyl). Except for methanol, all alcohols can be classified as primary, secondary, or tertiary. In a primary alcohol, the carbon bonded to the OH group is also bonded to only one other carbon. In a secondary alcohol and tertiary alcohol, the carbon is bonded to two or three other carbons, respectively. When the hydroxyl group is directly attached to an aromatic ring, the resulting group is called a phenol.

As the name implies, carboxylic acids are acidic, meaning that they are readily deprotonated to form the conjugate base form, called a carboxylate (much more about carboxylic acids in Chapter 20).

In an acid anhydride, there are two carbonyl carbons with an oxygen in between. An acid anhydride is formed from combination of two carboxylic acids with the loss of water (anhydride).

In a nitrile group, a carbon is triple-bonded to a nitrogen. Nitriles are also often referred to as cyano groups.

Identify the functional groups in the following organic compounds. State whether alcohols and amines are primary, secondary, or tertiary. 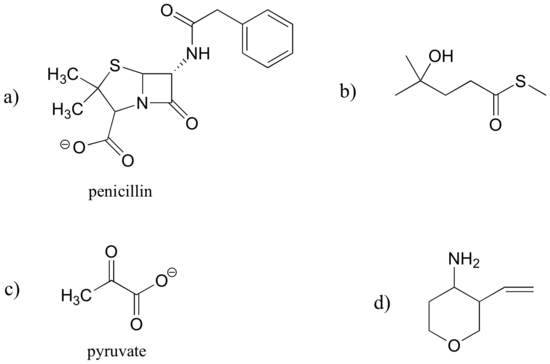 1: Identify the functional groups in the following organic compounds. State whether alcohols and amines are primary, secondary, or tertiary.