Zimmerman proposed a chair-like geometry for the Ivanov Reaction (a variant of the aldol reaction).

This model has since been generalized to the aldol reaction and is now known as the Zimmerman-Traxler Model.

As can be seen from the above data, the model does not translate well to all enolates and works best when X is a large group; however, optimizations of the metal center have allowed for the development of a general model.

Switching to a Boron Lewis acid provides several advantages over other lewis acids.

Boron lewis acids have been developed to provide either Z or E enolates in high selectivity. Ten years later, conditions were developed to provide the E-enolate in high selectivity.

Control of the reaction can original from a Chiral X group, such as the Evans auxiliary, or from a chiral ligand attached to the metal center. The enolate substituent also plays a large role in the selectivity.

This is believed to arise from a destabilizing interaction in the product.

Anti-selectivity can be acheived in several ways. Switching to a different auxiliary allows for the formation of the E-enolate.

Alternatively, the Evans Auxiliary can generate the anti-product by switching to a magnesium lewis acid. This reaction is believed to proceed through a boat transition state to provide the anti-diastereomer. Several oxazolidinone derived auxiliaries have been shown to be useful in the acetate aldol reaction. The use of the parent Evans auxiliary with acetate substrates shows no diastereoselectivity.

Enol silanes can be generated with high levels of enolate selectivity.

In the presence of a lewis acid, these enol silanes will add to aldehydes. The Mukaiyama aldol reaction proceeds through an open transition state, which can be represented in a newman projection. The two illustrated stransition states do not differ significantly in energy, but there is a prevalent view that the anti-periplanar transition state is favored based on electrostatic effects.

Studies from the Heathcock group cast doubt on an inherent prefence. One of the major problems associated with catalyzing the Mukaiyama aldol is the possible generation of TMSOTf through the course of the reaction. This Lewis acid can then act as an achiral catalyst and erode the enantioselectivity of the reaction. 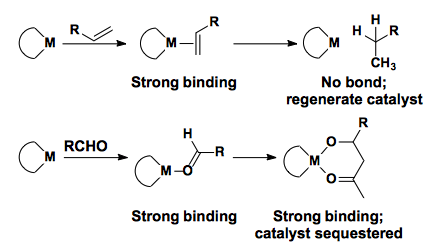 Yashimoto developed boron-based lewis acid catalysts that are readily available from tartrate or amino acids. These have been shown to convert the E- or Z-enolate to the anti-product in high diastereoselectivity and enantioselectivity.

Access to the aldol retron (a beta-hydroxy carbonyl) can also be achieved by the Noyori reduction which will reduce a beta-keto ester to a beta-hydroxy ester.