MARK the following statements as TRUE or FALSE.

2A) What is the energy of a particle with mass of 2.3 x 10-27 kg that is confined in a one-dimensional box of 50 Å length? Assume that the particle is in the third energy level.

2B) What is the wavelength of a photon released during a transition from level three to level two in above system?

B) A reaction that consume CO2 follows Michaelis-menten enzyme kinetics with Km=0.001 M, and the initial concentration of substrate=0.840 M. After 2 seconds, 5% of the substrate has been converted to product[DL1] . How much CO2 will be converted after 10 and 60 seconds?

3B) When 2 x 10-10 mol is added to a 1-L solution containing its substrate at a concentration one hundred times the Km, it catalyzes the conversion of 75 µmol of substrate into product in three minutes. What is the enzyme’s turnover number (turnover rate)? 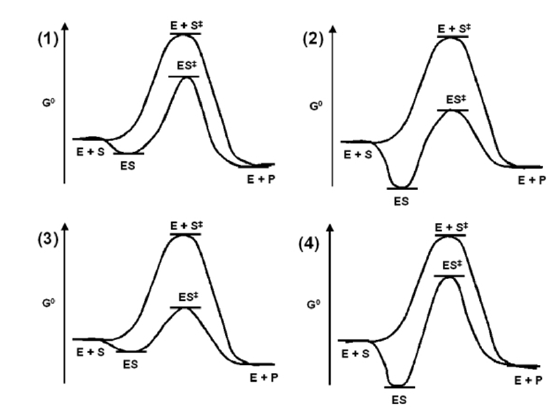 7A) How many electrons in a hydrogen atom can occupy the wavefunctions with the following values of l:

7B) What is the probability of finding a particle outside a box (choose either: 0, 1 or in-between)

7C) What is the probability of finding a particle exactly in the middle of a box (with infinite potential walls) when excited to the n=1 state?

The diffraction phenomenon can be observed whenever the wavelength is comparable in magnitude to the size of a slit opening. How fast must your instructor, weighing 92 Kg, run to diffract through a door 1 m wide?