What is the hybridization of the sulfur atom is \(SF_4\)?

What is the hybridization of the oxygen atom in water?

When a double bond is formed between two atoms, one of the bonds is a sigma bond and the other is a pi bond. The pi bond is created by the overlap of...

Describe completely the main features of each of the following and explain what useful information we gain from each.

Consider (2E)-3-Methyl-2-nonen-7-yne, an organic molecule with the molecule skeleton structure below: 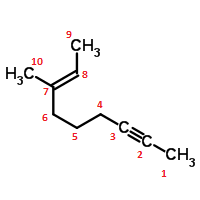