When adding or removing heat from a system one of three things can occur:

In this section we shall look at changes between two phases. In reality there are 4 states of matter, solid, liquid, gas and plasma, although in this class we will focus on the three common states, and their transitions.

Figure \(\PageIndex{1}\) shows the phase transitions between the various phases and not the enthalpy of the system is a measure of the heat energy at constant pressure and will be introduced in section 5.4.3 of this Chapter.

We will formally introduce endothermic and exothermic reactions in the section 5.4 (the next section) when we discuss the First Law of Thermodynamics and define the direction of heat transfer (as being positive when something gains energy, and negative when something loses energy). So an exothermic process is one where energy is released to the environment and an endothermic one is where energy is absorbed from the environment. We are introducing the concept early because all the process going in direction of increased energy (S->L ->G) are endothermic (you add energy to boil water), and those of decreasing energy (G -> L -> S) are exothermic

Consider the process of water freezing.

Students often have a hard time understanding sublimation. Carbon dioxide (dry ice) that you can buy at many grocery stores sublimes, that is, it goes directly from a solid to a gas without ever melting (which is why the call it "dry ice"). Video \(\PageIndex{2}\) demonstrates the sublimation and deposition of iodine.

We have seen how heat is either released or absorbed during phase changes. Now, we will study the quantity of energy associated with those phase changes. In order to carry out those calculations, we need to establish a standard bases for comparison, the molar heat of the phase transition, or the heat required for one mole of substance to change phase. Particularly, molar heat of fusion, refers to the amount of heat (in kJ) it take for one mole of substance to transition from the solid state to the liquid state (melt). The molar heat of vaporization, is the amount of heat (in kJ) it takes for one mole of a substance to transition from the liquid state to the vapor phase. Since we are not always working with exactly one mole of each substance, we will use this equation to Figure out the heat for the particular number of moles that we have according to the following equation:

where n is the number of moles, and H is the heat or enthalpy required for one mole of a substance to go through the phase transition at the temperature where it occurs (which depends on the pressure). Unless otherwise noted, you can assume these are the boiling points and freezing point at 1 atm pressure. As you can see from Table 1, these values are usually given and tabulated. Since, we typically deal with the mass of substance, there are some tables that also give you the heat of transition of a substance on a per gram bases (usually reported as J/g) Here is a link the following tables heat of fusion and heat of vaporization tables:

B2: Heats of Vaporization (Reference Table)

B3: Heats of Fusion (Reference Table) 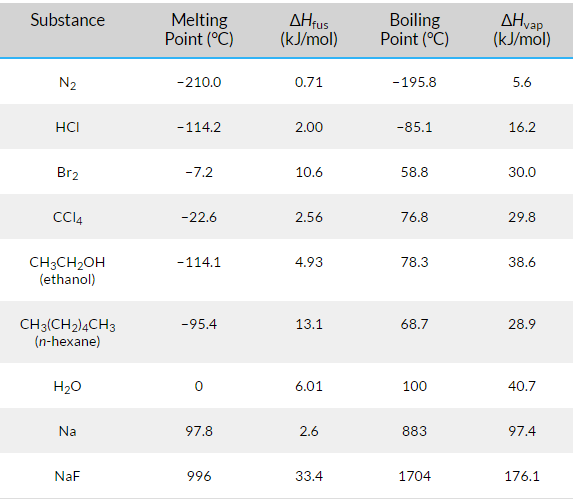 Table \(\PageIndex{1}\): Enthalpies of Fusion (melting) and Vaporization for some common substances, and the transition temperature where they occur (at normal pressure of 1 atm).

For a given substance, which is higher, ΔHFusion = ΔHVaporization and why?

From table \(\PageIndex{1}\) it is clear that the enthalpy of vaporization is larger than fusion. This is because when you vaporize something you overcome all of the intermolecular forces and the material becomes a gas, filling up the entire container. It takes much more energy to vaporize a substance then to melt it.

Molar Heat of Freezing and Condensation

You may have wondered why table \(\PageIndex{1}\) only provides the molar heat of fusion and vaporization, and not the opposite processes of freezing and condensation. For example, if we wanted to quantify the amount of heat it takes to freeze a certain mass of N2, what would be the molar heat of freezing? This is actually the negative of molar heat of melting or fusion, which is the heat energy required to melt one mole of a substance. So from the above diagram, it is - 0.71 kJ/mol. Note, this is a consequence of the First Law of Thermodynamics, the law of the conservation of energy, which we will discuss in detail in the next section. What it is stating is that the energy you must add to melt a mole of a substance is the same as the energy released when a mole freezes, because energy is conserved, but the energy flows in the opposite direction. Therefore, the above table not only gives you the enthalpies of fusion and vaporization, but also of freezing and condensation.

Molar Heat of Sublimation and Condensation

Table \(\PageIndex{1}\) also provides the heats of sublimation and condensation. Can you Figure them out?

The heat being pumped into the system does not always go toward changing the phase of a substance. It may go into changing the temperature of a substance. For example, if you want to melt an ice cube that is at -10°C, you have to heat the ice to 0°C, before you can actually start the melting process. In order to quantity the amount of heat required to change the temperature (in the same phase, ice) from -10°C to 0°C, you can use the specific heat capacity equation that we covered in 5.2.

A heating curve is a graph of the temperature of a substance as a function of the amount of heat added (moving to the right) or removed (moving to the left), as depicted in Figure 5.3.2. Note the flat regions represent phase changes, and the slope of the line in the rising regions is related to the capacitance of the sample being measured (it is actually the reciprocal, or 1/mc).

The concept of the heating curve is very important as it helps us Figure out what equation to use to quantify the heat associated with phase changes and temperature changes (watch the two videos below). At the beginning of this section, we stated that two of the three things that could happen when you add heat to a substance is that either it will undergo a phase change, or its temperature will rise. These are the two effects being described by the heating/cooling curve. The mathematical equations are:

What is wrong with the slopes of the lines in Figure \(\PageIndex{2}\)?

The slopes would be different, and the slopes of the ice and steam would roughly be twice as steep as the water. That is, it takes more energy to raise the temperature of liquid water by 1 deg than it does for either steam or ice.

What is wrong with the flat region of Figure \(\PageIndex{2}\)?

They are roughly equal in length. In exercise \(\PageIndex{2}\) it was pointed out that ΔHVaporization >> ΔHFusion and so the flat region for vaporizing should be much longer than the one for melting. As this is such an effect, a zig-zag is often drawn into the flat region to indicate that it is off the scale of the graph (see videos below).

The following three examples deal with adding different amounts of energy to 100.0g of ice starting at -10.0°C.

This problem requires you figuring out what phase the substance ends up in. Does 1.6kJ have enough enough energy to bring it to the freezing point? To melt it? To warm the liquid to its boiling point? To boil it? To raise the energy of a super heated steam?

This problem requires you figuring out what phase the substance ends up in. Does 25.00kJ have enough enough energy to bring it to the freezing point? To melt it? To warm the liquid to its boiling point? To boil it? To raise the energy of a super heated steam?

After all the ice has melted in the above problem, is there more ice, or liquid water?

This problem requires you figuring out what phase the substance ends up in. Does 310.0kJ have enough enough energy to bring it to the freezing point? To melt it? To warm the liquid to its boiling point? To boil it? To raise the energy of a super heated steam?

After adding 310 kJ you have enough energy to raise the super cooled water from -10.0oC to its freezing point (2.06kJ), melt the ice (33.42kJ), heat the liquid water to its boiling point (41.84kJ) and boil all the water (225.37kJ) using a total of 303.7 kJ, with 7.3kJ left to raise the temperature of the super-heated steam to a final temperature of 136oC. Notice how the majority of the energy was used in the fourth step, the boiling of the the water (225.37kJ out of 310kJ, or 72.7% of the entire energy). This makes sense, as in going from a liquid to a gas you are overcoming all of the forces holding the water molecules together.