a science that deals with the composition, structure, and properties of substances and with the transformations that they undergo ("Chemistry." Merriam-Webster.com. Merriam-Webster, n.d. Web. 16 May 2016.)

The branch of science that deals with the identification of the substances of which matter is composed; the investigation of their properties and the ways in which they interact, combine, and change; and the use of these processes to form new substances. (chemistry. Oxford Dictionaries. Oxford University Press, n.d. Web. 17 May 2016. )

So Chemistry is a Science.

What distinguishes a Science from other types of academic disciplines?

This is a good question, and I would say the Scientific Method. Democritus of pre-socratic Greece came up with an ancient atomistic theory that viewed mater as being based on two fundamental entities, atoms and the void. This ancient theory was similar in principle to the modern atomistic theory and is in fact where the name "atom" came from. The fundamental difference is that it was not based on the

Scientific Method and the rigorous verification based on empirical (measurable) data. In essence, many philosophies could produce understanding and frameworks for understanding that gained societal acceptance through oration and debate, but just because they were widely accepted, did not mean they were correct. The scientific method places faith on measurable entities and the repeatability of the causal relations between them.

So What is the Scientific Method? The Scientific method is a philosophy based on the process of making observations, forming hypothesis that could explain them and testing them through experimentation. A theory is a mental construct or model that explains what is happening, and is often the basis for further hypothesis to test with additional experiments. A theory can be right for the wrong reason. A scientific law is a refined result of this process that can never be broken and allows us to predict what will happen, but does not explain why. For example, the first law of thermodynamics says that the energy of the universe is constant, so if heat is transferred from one object to another in an isolated system, the heat lost by one will be the same quantity as the heat gained by the other.

What is the difference between Qualitative and Quantitative Information?

Qualitative information is based on observables, like ice floats on water, or chlorophyll is green, or the patterns of the lines on your fingerprint. Qualitative data can be used to identify what something is.

How Old is Chemistry as an Applied Science? 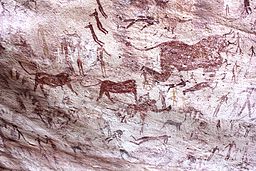 As an applied science, chemistry dates to antiquity. Primitive man learned how to make and keep fire that allowed him to cook and keep warm. Primitive man learned how to extract pigments from minerals that were used to paint their caves. There were often religious overtures to their use of applied chemistry as shamans used these technologies to interact with their spirit world.

How old is Chemistry as a Modern Science? The image on the left is the U.S. Declaration of Independence, while the image on the right comes from John Dalton's 1808 book, "A New System of Chemical Philosophy", which was written 32 years after the United States Declaration of Independence. Note that even in these recent times, hydrogen was not "H" but a circle with a dot in the middle of it, and Oxygen was a circle, and water was the two next to each other. The symbols of the periodic table that are so common today did not even exist when George Washington was president!

Is Chemistry as a Science Evolving?

Yes! Microsoft Research has a free online book, the Fourth Paradigm: Data Intensive Scientific Discovery, that postulates 4 paradigms of science. The scientific method evolved out of the first two paradigms but is still valid as a philosophical underpinning of the application of the latter paradigms. These paradigms can be summarized as follows.

Although this course will focus on the fundamentals of the first two paradigms of science, you will be entering a world and a workforce where the latter two paradigms will be gaining importance in the pursuit of science. It needs to be realized that all of these complement each other, and fit within the framework of the scientific method.

Chemistry is an exciting topic and full of discovery. It is the study of matter, of stuff. What is stuff? Why do some things react? Why are some things stable? With sciences like chemistry man has great control over the world around him. He can create new materials to wear, new energy sources, new drugs, and yes, he can also create toxins that pollute the earth, chemical weapons that kill and maim, and often chemistry gets a bad reputation because of the detrimental effects of its use. In the next section before we get deep into this class we will briefly look at green chemistry.