In the previous section we learned that electrons have wave/particle duality, exist in orbitals that are defined by the Schrödinger wave equation that involves the complex coordinate system and imaginary numbers, and that they can be defined by quantum numbers n, l and ml. We use the Greek symbol psi (\(\psi\) to represent a wave function. In this section we will look at the shapes of orbitals that have been transformed to the real coordinates of the x,y,z Cartesian coordinate system. The math of this transform is beyond the scope of this class, but for example, the \(\Psi _{P_{+1}}\) and the \(\Psi _{P_{-1}}\) orbitals can be combined in two ways that produce two new orbitals with real coordinates of the Cartesian coordinate system (the imaginary components of the wave functions cancel) the \(\Psi _{P_{x}}\) and \(\Psi _{P_{y}}\) orbitals. Since the original \(\Psi _{P_{+1}}\) and \(\Psi _{P_{+1}}\) were both solutions of the Schrödinger wave equation, their combinations are also solutions, and so we can visualize atomic orbitals as shapes along the x,y,z axes. All three quantum numbers influence the ultimate shape. The probability of finding an electron is \(\psi^2\) and in the following representations we are implictily defining the orbitals as the square of the wavefunction.

So when we say 1s or 3dxz we are orbital in terms of its location in space, and the images in Figure \(\PageIndex{1}\) represents the shapes of some common orbitals where there is roughly a 90% probability of finding the electron that resides in that orbital.

We will look at each of these in turn.

For l=0 the electron density function is spherically symmetric and the 1s orbital has no nodes. Figure \(\PageIndex{2}\) shows the square of the wavefunction

As the principle quantum number increases both radial nodes occur and the average distance from the nucleus increases. The "onion skin" analogy has often been used to describe this where the flesh of the onion represents the probability of an electron exisiting (realize the greater r, the greater the surface area), and the nodes are the empty spaces between the layers of the onion. Of interest is that the higher principle quantum number has the peak of its inner peak closer to the nucleus (the first peak in the \(\psi^2_{3s}\) is at a shorter radius than for the \(\psi_{2s}\) or \(\psi_{1s}\).

How many radial nodes would a 5s orbit have?

For the n=2 shell and greater there are three p orbitals. In the Cartesian coordinate the pz correlates to the ml=0 and the px and py are mathematical combinations of the ml = +1 and ml = -1. (Note, the terms px, py and pz actually relate to the wavefunctions squared, as indicated above. For n=2 there is one node, in fact it is a nodal plane. If you look at the name, you can see that these are radially symmetric along one axis, which is the axis of the name, and the nodal plane is defined by the other two axes where they go through the origin.

Just as for s orbitals, as you move to higher principle quantum numbers the number of nodal surfaces increases, but they are no longer simple planar surfaces (see Figure \(\PageIndex{3}\)).

Starting with the third principle quantum number d orbitals form, and there are 5 of these. Once again we are looking at ones that are defined by the Cartesian coordinate system. You will note that the 3 d orbits have two nodal surfaces. 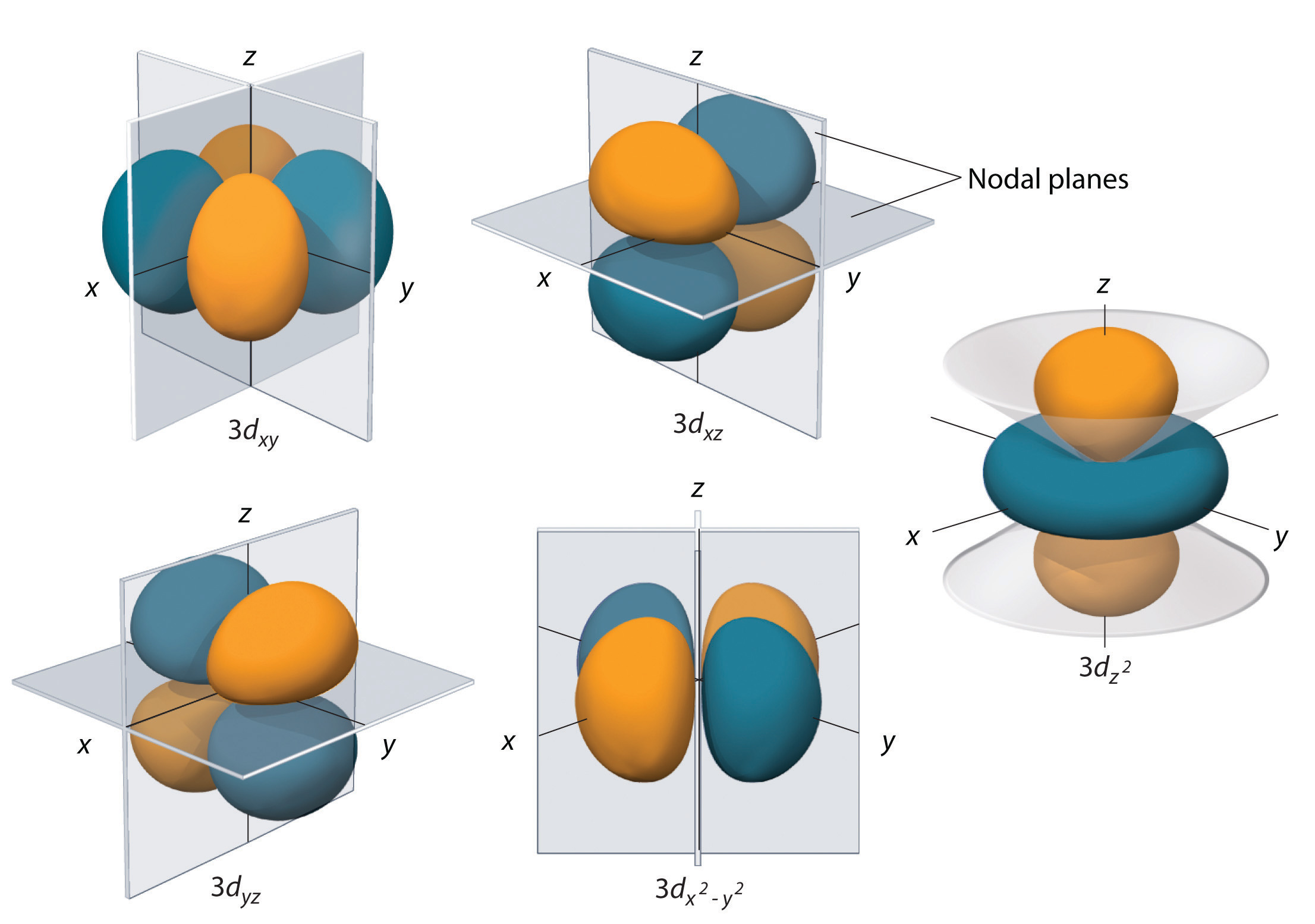 What are the nodal planes for the dxy orbital?

The xz and yz planes

There are seven f orbitals and these are the most complicated. As you have probably Figured by now, the first f orbitals appear in the n=4 "shell," and they have three nodal surfaces. ULAR students will not be required to know the names or shapes of the F orbitals, and the following embedded application from ChemTube3D can give you a feel for the f orbitals .

Embedded Webpage from ChemTube 3D at the University of Liverpool. The direct link is https://www.chemtube3d.com/, if you click "Structure and Bonding/ atomic orbitals" you can look at the 3d structures of additional orbitals.

Some material adopted, modified or adapted from