Once again, it must be said and repeated: thermodynamics is a discipline that requires precision in our language. And so we want to give time to making sure we're precise with the word system.

The image at right (from the public domain on Wikimedia Commons) is a generic representation of a system. It is enclosed by a boundary; is has surroundings that are on the other side of the boundary. Here and often throughout our study of thermodynamics, we'll divide the universe into a system and its surroundings, and we'll study both independently of one another.

It is a very special sort of system that doesn't allow even energy to get across the boundary; we call that kind of closed system an isolated system.

For the most part, as we study systems, we're not going to be interested in open systems; the distinction between the system and the surroundings gets fuzzy in that case. We're not going to be interested much in isolated systems either; problems where no energy is transferred are boring problems. It's the closed system that allows energy back and forth across the boundary where most of the interesting concerns of thermodynamics are found. Systems of that sort are what we are referring to below.

One way to add energy to a system is to raise its temperature, and the simplest way can envision doing so is bringing that system into contact with something at the higher temperature, and letting the two systems sit together for a while, with energy crossing the boundary between the two systems, until the temperatures equal out. The fact that this happens is something that is so instinctive and natural to our experience that we can call it a scientific law. It’s a somewhat silly law, so silly that we give it the silly name the zeroth law of thermodynamics, but it’s worth mentioning because without it, we don’t have a useful definition of temperature.

The second thing it does is assemble the terms we’ll use to describe the transfer of heat. Energy has to move from one system to another if those systems are going to achieve the same temperature. If all other state quantities remain constant, when two systems of different temperature come into contact with one another, heat energy is released from the system at higher temperature (or the hot system) and is absorbed by the system at lower temperature (the cold system).

It turns out that if volume is held constant, all of this heat transferred will always be the only source of internal energy change for the system, and we can make this expression exactly equivalent:

The “V” subscript on the heat capacity symbol CV represents volume of the system being held constant - this is the most common kind of heat capacity, but not the only kind, especially for gases! We’ll expand our picture of heat capacities later.

What’s more interesting in this moment, and will have more implications for how we study energy in the long run, is the difference in how we represent heat (q) and how we represent internal energy change (ΔU), which under conditions of constant volume are equivalent properties. Notice that the symbol we use for both are different, because the way the energies are accounted for are different.

Internal energy change is the sum of kinetic and potential energy changes with the system. Each of these quantities are state energies - they are energies that describe the specific state of the system at a given point in time. A system can possess internal energy, because individual molecules can possess a given kinetic and potential energy at a moment in time. 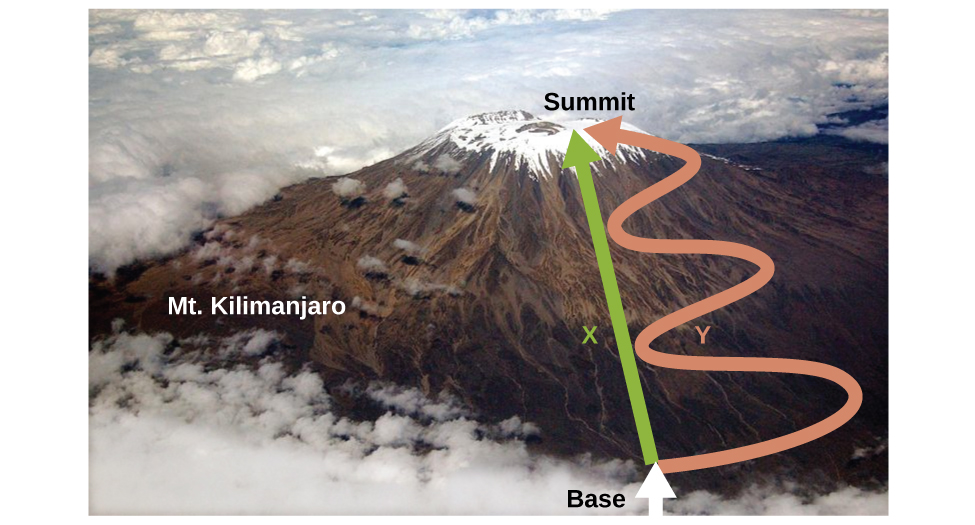 Process energies are often called path energies in the language of thermodynamics, and that's because the energies are considered to be functions of the path required to change a condition from initial to final. If you consider the two paths at right up Mount Kilimanjaro (image taken from OpenStax Chemistry, CC BY 4.0) it's quite plain that the direct path X will require less work (although possibily more agility!), while path Y is longer and will require more work. But when you take the difference in potential energy between the two paths, you get the same result; you started from the same low elevation regardless of path, and you ended at the same high elevation. Potential energy is a state energy; the change in potential energy only depends on the initial and final points. Work is a process energy; it depends on the path taken. (In a thermodynamics context, we'll say more about work later on.)

The heat capacity CV is a classic extensive property - a property of an object or a system alone. If we want to make sure we’re studying a material intensively, what we’re taught to do in general chemistry coursework is to divide the heat capacity by the mass of the homogenous system, and determine that object’s specific heat:

In physical chemistry, however, we find it more useful to focus on not a specific heat dictated by a material’s mass, but a molar specific heat:

The bar over the quantity (and its constant-volume counterpart ), as we previously did with molar volume, is our tell that we are using a molar variety of the quantity. This gets designated with subscripts in other textbooks (say, as CV,m) and sometimes the designation of molar quantities is inconsistently done, as we will point out in coming sections. We will make every effort in this text to be consistent with our use of bars to designate molar quantities.