This page is under construction -

Figure \(\sf{\PageIndex{1}}\). (A) Idealized unit cell of Prussian Blue showing the cubic coordination framework of interconnected [FeII(CN)6]4- and Fe3+ units. Because the ratio of Fe3+ to [FeII(CN)6]4- is 4:3 some of the [FeII(CN)6]4- sites are occupied by aqua ligands. (B) Structure of a Hofmann type clathrate consisting of layers of square planar [Ni(CN)4]2- units linked by Ni(NH3)22+ units.  In this structure water occupies the sites between the layers but structures like these can adjust to accommodate a variety of organic molecules. Hydrogen atoms are omitted for clarity. Rendered from the structures reported in references 1. This work by Stephen Contakes is licensed under a Creative Commons Attribution 4.0 International License.

The cubic network shown in Figure \(\sf{\PageIndex{1A}}\) reflects the 3D structure of the octahedron, in which the M-L bonds point along the x, y, and z axes. If a square planar metal center is used a 2D coordination network comprised of interlinked squares is produced instead.  An example is the Hofmann clathrate shown in Figure \(\sf{\PageIndex{1B}}\), which depicts a Hofmann clathrate in which square planar [Ni(CN)4]2- units linked by trans-Ni(NH3)22+ units (which are octahedral but have a square plane of open coordination sites perpendicular to the NH3-Ni-NH3 axis).

As illustrated by the Prussian Blue and Hofmann clathrate coordination networks shown in Figure \(\sf{\PageIndex{1}}\), the structures formed when a bridging ligand links multiple metal centers depends on the geometry of the centers, the ligand, and the metal-ligand bonds formed. Because the directionality of metal-ligand bonding in many types of complexes is well-characterized and predictable, it is possible to design metal complexes and linkers that can serve as building blocks for clusters and networks. In particular

Examples of the sort of metal centers that can be used and examples of linking ligands are given in Figure \(\sf{\PageIndex{2}}\). Figure \(\sf{\PageIndex{2}}\). The directionality of M-L bonding permits the rational construction of structures using metal and ligand “building blocks”. For example, (A) Tetrahedral, octahedral, and square planar metal centers alone can be used to connect sets of ligands at 90\(^{\circ}\), 109.5\(^{\circ}\), and 180\(^{\circ}\) bond angles in a variety of arrangements while (B) the selection of organic linkers shown can be used as linear, trigonal planar, and tetrahedral linkers.

Figure \(\sf{\PageIndex{3}}\).  Examples illustrating how the combination of metal and organic linker units gives rise to polyhedral and network structures that reflect the geometry of the building blocks used.

A classic example of a square shown in Figure \(\sf{\PageIndex{4}}\). In its structure, the Pt(en)2+ centers possess cis-90\(^{\circ}\) coordination sites linked by the linear linker 4,4'-bipyridine. 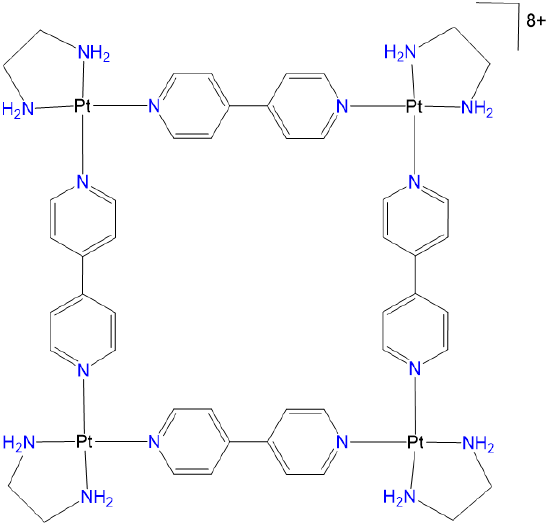 Figure \(\sf{\PageIndex{5}}\). (A) When a tetrahedral metal center is coordinated by two planar bidentate ligands the lingands are oriented at 90\(^{\circ}\) to one another. (B) This permitted Jean Marie-Lehn and his cowokers to prepare a molecular trigonal prism consisting of six Cu2+ ions linked by the rigid and semirigid nitrogen containing ligands on the prism's trigonal faces and rectangular edges as shown.  Redrawn from structures given in reference 3.

One class of coordination frameworks that has recieved much attention over the past 25 years are the metal organic frameworks (MOFs). These consist of metal centers linked by rigid organic ligands to give a porous structure similar to those in the aluminosilicate-based zeolites. The structure of one MOF, called MIL-53, is given in Figure \(\sf{\PageIndex{6A}}\).

Figure \(\sf{\PageIndex{6}}\). In metal organic frameworks containing carboxylate ligands the two oxygens in each carboxylate usually bind to different metal centers. A simple example involves the structure of MIL-53, in which linear p-terephthalato (1,4'-benzenedicarboxylato or BDC) ligands bridge chains of linked MO6 octahedra. (A) Structure of MIL-53 showing the open structure of the MOF, indicated by the yellow spheres.  (B) Top-down image of an MIL-53 structure showing how the carboxylic acid oxygens in the BDC ligands coordinate two different metals. The image in part A is by Tony Boehle - Tony Boehle, Public Domain, https://commons.wikimedia.org/w/inde...curid=10328580  The image in part B is rendered from the jmol structure of MIL-53(Sc) at  https://www.chemtube3d.com/mof-mil53sc-2/

As can be seen from the overall structure of MIL-53 depicted in Figure \(\sf{\PageIndex{6A}}\), the structure possesses large rhombic prismatic voids, represented by the yellow spheres. These voids can in principle be occupied by small molecule substrates.  Because of MOF's potential to bind and store substrates, their is considerable interest in developing MOFs that are useful for storing and separating particular gases.

A closer look at the structure of MIL-53 reveals that the carboxylate oxygens in the benzenedicarboxylato (BDU) linkers span two different metal centers rather than binding to only one.  As explained in Figure \(\sf{\PageIndex{7}}\), this binding mode enables the formation of rigid stable networks, although it requires the use of metal building blocks in which two or more metal centers are held in close proximity.

Figure \(\sf{\PageIndex{7}}\). The carboxylate groups in the ligands iof metal organic frameworks commonly bind \(\kappa\)1 to two two different metal centers rather than \(\kappa\)1 or \(\kappa\)2 to a single center because the single metal \(\kappa\)1 binding mode is too flexible to give rigid networks while the small chelate rings and narrow bite angles of the \(\kappa\)2 chelate rings make them less stable.

In MIL-53 the metal centers which the DBU ligands coordinate are chains of octahedral metal centers bridged by \(\mu_2\) hydroxo ligands. These chains form spontaneously as the network form under the high temperature conditions of its synthesis. In other cases, metal secondary building units (SBUs) containing the necessary bridging dicarboxylate ligands are used. One common class of metal SBUs used are the paddlewheel carboxylates shown in Figure \(\sf{\PageIndex{8A}}\).  These consist of two metals spanned by a square plane of four carboxylates in a paddlewheel arrangment.

Figure \(\sf{\PageIndex{8}}\). Metal organic frameworks do not use a metal center directly but instead employ a metal cluster as a secondary building unit (SBU). (A) Paddlewheel carboxylates are a common SBU. They consist of two metals surrounded by four carboxylato ligands in a square planar "paddlewheel" arrangement.  (B) In complexes where the ligands contain additional carboxylates they function as a planar center in a MOF. An example is the paddlewheel carboxylate present in the HKUST class of MOFs, in which each carboxylato ligand is capable of bridging to three dimetal units. Note that in the structures shown the axial ligands shown in green may be present or absent depending on the specific metal carboxylate used and/or whether the ligand was removed during processing of the MOF.

Figure \(\sf{\PageIndex{10}}\). (A) Basic zinc acetate is a common SBU used as a pseudooctahedral center in MOFs. (B) Exchange of its acetate ligands with p-terephthalate (1,4-benzendicarboxylate) linkers gives a complex in which the free dicarboxylate's are oriented towards the vertices of an octahedron (C).

The octahedral arrangement of carboxylate ligands in the basic zinc SBU structure results in a cubic lattice when basic zinc carboxylates are paired with linear dicarboxylate linkers, as shown in the structure of metal organic framework 5 (MOF-5) in Figure \(\sf{\PageIndex{11}}\). Figure \(\sf{\PageIndex{11}}\). A cubic metal organic framework derived from the basic zinc acetate SBU. The structure is called MOF-5 and consists of Zn4O6+ pseudooctahedra linked by linear p-terephthalate (1,4-benzendicarboxylate) ligands. The large golden sphere inside the unit cell has a radius of 12 Angstroms (defined with the aromatic rings oriented as shown) and represents the space available for the framework to accommodate guest molecules. By Tony Boehle - Own work, Public Domain, https://commons.wikimedia.org/w/inde...curid=10319204.

The strucutre of MOF-5 also illustrates how the size of the pores in an MOF structure may be tailored by lengthening or shortening the organic linker. In particular, from Figure \(\sf{\PageIndex{11}}\) it can be seen that the size of the MOF-5's cubic unit cell depends on the length of the organic portion of the carboxylate linker. In MOF-5 this linker consists of a single benzene unit and gives 9 Angstrom pores while the use of two and three benzene rings increases the pore size to 13 and 16 Angstroms, respectively, as shown in \(\sf{\PageIndex{12}}\).

Figure \(\sf{\PageIndex{12}}\). The spacing between metal centers in a coordination network may be tailored by the use of organic linkers of differing lengths. By François-Xavier Coudert - Own work, CC BY 4.0, https://commons.wikimedia.org/w/inde...curid=89656071

1. The structure of Prussian blue is rendered from that reported in Buser, H. J.; Schwarzenbach, D.; Petter, W.; Ludi, A., The crystal structure of Prussian Blue: Fe4[Fe(CN)6]3.xH2O. Inorganic Chemistry 1977, 16(11), 2704-2710; to simplify depiction of the coordination framework water molecules were removed. The structure of the Hofmann type clathrate is rendered from that reported in Rayner, J. H.; Powell, H. M., 688. Crystal structure of a hydrated nickel cyanide ammoniate. Journal of the Chemical Society (Resumed) 1958, 3412-3418.

Stephen Contakes, Westmont College, to whom comments, criticisms, and requests for corrections should be addressed.

Consistent with the policy for original artwork made as part of this project, all unlabelled drawings of chemical structures are by Stephen Contakes and licensed under a Creative Commons Attribution 4.0 International License.