Consider stearic acid, a type of lipid known as a fatty acid. It has an 18 C atom chain with a carboxylic acid group (RCO2H) at one end.

The carboxyl end (shown in red) containing the two oxygens is polar, but the rest of the molecule is completely nonpolar. We can draw a "cartoon" model of this molecule as a circle representing the carboxyl polar end or "head group" with a single connecting line representing the long, nonpolar "tail".

How would this fatty acid interact with water? A small number of these molecules might be soluble in water (remember even insoluble salts dissociate to a small degree to form some ions). The nonpolar tail is not stable in water, but the polar head is. Some of the molecules migrate to the surface of the water, with the nonpolar tails protruding into the air and away from water, forming a monolayer on the surface. Others will self-aggregate through IMFs to form a spherical structure in which the nonpolar tails are sequestered from water and the polar heads are facing the water. This structure is called a micelle. In the figure below, the polar head groups are shown in blue. 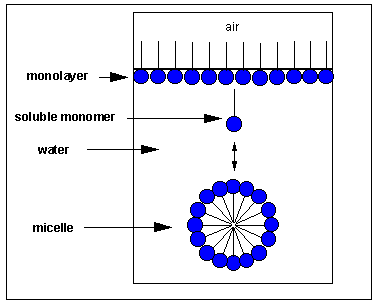 Which IMFs are involved? First consider attractive IMFs. The buried nonpolar chains can interact and be stabilized through London forces. Buried inside of the micelle, the nonpolar chains are sequestered from water. This view fits our simple axiom of "like-dissolves like". The polar head groups can be stabilized by ion-dipole interactions between charged head groups and water. Likewise H-bonds between water and the head group stabilize the exposed head groups in water. Repulsive forces are also involved. Head groups can repel each other through steric factors, or ion-ion repulsion from like-charged head groups. The attractive forces must be greater than the repulsive forces, leading to micelle formation.

Detergents are molecules, like fatty acids, that have distinct and separate polar and nonpolar regions. They form micelles in water. Grease from clothes or foods, normally not soluble in water, can "dive" into the middle of the micelle and be carried off by this structure. This effectively "solubilizes" the nonpolar molecule. Notice that there is no water inside the micelle as you can see in the figure and Jmol computer model above.

Now consider another lipid, a phospholipid, the example shown below. X represents a polar group containing a charged phosphate.

Note that it has a polar end (shown in red), but in contrast to stearic acid, it has two long nonpolar tails shown in black. We can draw a "cartoon" model of this as a circle representing the polar end or "head group" with two connecting lines representing the two long nonpolar "tails". It is a double chain amphiphile. Phospholipids are the major component of biological membranes. Again, in the figure below, the polar head groups are shown in blue. How would this phospholipid interact with water? Again, as with single chain detergents, there are several possible ways. A small number of these molecules might be soluble in water. Nonpolar tails are unstable in water, while the polar head are stable in water. As in the case of single chain detergents, some of the molecules migrate to the surface of the water, with the nonpolar tails sticking out into air, away from water, to form a monolayer on the top of the water. Others will self- aggregate through IMFs to form a bilayer or membrane instead of a micelle, which only contains single chain amphiphiles. The polar head groups in a double chain amphiphile can get closer together than in a micelle since there are extra stabilizing interactions among the side chains. The result is the formation of a membrane bilayer which affords less space for each head group than in a micelle. Imagine the bilayer membrane curving around and eventually meeting itself. A structure like this would look like a small biological cell. In contrast to a micelle, the interior of this multimolecular lipid aggregate, called a liposome or vesicle, is filled with water which can interact through IMFs with the head groups of the inner leaflet of this membrane. The head groups of the outer leaflet of the membrane interact through IMFs with the bulk water.

Liposomes are useful since they are simple models of actual biological membranes. In addition, they can be used therapeutically. Toxic drugs, like those used in chemotherapy, can be incorporated into the aqueous volume inside a liposome where they can be targeted to specific tumor cells.

Liposomes and micelles seem to be complicated structures. However their formation and structure can be predicted from the simple solubility properties of these molecules and through an understanding of IMFs.

Ever wonder why a solution of sodium hydroxide (a base) feels slippery on your skin? The hydroxide base cleaves the bond between fatty acids connected to more complex skin phospholipids. The free fatty acids then aggregate spontaneously to form micelles which act like detergents which as you know feel slippery as well.

This molecule overall is so nonpolar that it self-associates to form lipid drops which are stored predominantly in fat or adipose tissue in the body. Instead of having a structural role, it functions mainly as a source of energy.

We've discussed how lipids can form aggregates in aqueous solution. Now let's reverse the scenario. Draw a diagram showing what might happen if lots of stearic acid molecules were added to the solvent hexane, C6H14.

An important property of a micelle is the surface area/head group (AS/HG). This is equal to the total surface area of the micelle divided by the number of single chain amphiphiles in the micelle, Atot/#amphiphiles. What kind of repulsive forces exist between head groups? What happens to AS/HG if the total charge on the head group increases? Decreases? How would IMFs between the nonpolar chains affect micelle stability?

Imagine now that you squish the spherical micelle into a bilayer. Think of this as flattening a tennis ball. What would happen to the (AS/HG)? (Hint: Think of pencils sticking out radially from the tennis ball, with the erasers representing head groups. What happens to the eraser spacing as it the tennis ball distorts to a bilayer?. How does this explain why charge single chain amphiphile don't form bilayers?

Now try a different thought experiment. Add more and more of the same single chain amphiphile to a spherical micelle. The shape must deviate from a sphere. Why? Draw a cartoon diagram to illustrate your point. In this case the lipid aggregate can grow if it adopts a cylindrical shape. Compare the (AS/HG) for the spherical, cylindrical and bilayer shapes. Which of these shapes are more likely to form

There are many other different types of lipids. An example, cholesterol, is shown below. This molecule has many biological functions. It is often found in lipid bilayers. Draw a cartoon showing how cholesterol might fit into a bilayer. A) Within the biomolecules discussed on this page, what are the functional groups that are potential ligands for metal ions?

B) One of the ways that biology controls metal ions is by "storing" them inside membrane-bound compartments; membranes can serve as barriers for preventing the metal ions from escaping. How does a membrane prevent metal ions from passing through it?