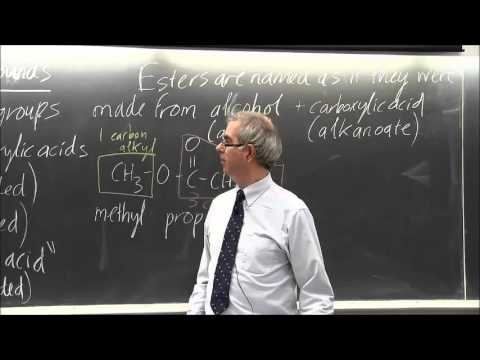 A YouTube element has been excluded from this version of the text. You can view it online here: http://pb.libretexts.org/ochem2walker/?p=48 If a prefix form is required, “oxo-” is used (as for ketones), with the position number indicating the end of a chain: CHOCH2COOH is 3-oxopropanoic acid. If the carbon in the carbonyl group cannot be included in the attached chain (for instance in the case of cyclic aldehydes), the prefix “formyl-” or the suffix “-carbaldehyde” is used: C6H11CHO is cyclohexanecarbaldehyde. If an aldehyde is attached to a benzene and is the main functional group, the suffix becomes benzaldehyde.

In general ketones (R-CO-R) take the suffix “-one” (pronounced own, not won) with an infix position number: CH3CH2CH2COCH3 is pentan-2-one. If a higher precedence suffix is in use, the prefix “oxo-” is used: CH3CH2CH2COCH2CHO is 3-oxohexanal.

In general carboxylic acids are named with the suffix -oic acid (etymologically a back-formation from benzoic acid). Similar to aldehydes, they take the “1” position on the parent chain, but do not have their position number indicated. For example, CH3CH2CH2CH2COOH (valeric acid) is named pentanoic acid. For common carboxylic acids some traditional names such as acetic acid are in such widespread use they are considered retained IUPAC names, although “systematic” names such as ethanoic acid are also acceptable. For carboxylic acids attached to a benzene ring such as Ph-COOH, these are named as benzoic acid or its derivatives.

Esters (R-CO-O-R’) are named as alkyl derivatives of carboxylic acids. The alkyl (R’) group is named first. The R-CO-O part is then named as a separate word based on the carboxylic acid name, with the ending changed from -oic acid to -oate. For example, CH3CH2CH2CH2COOCH3 is methyl pentanoate, and (CH3)2CHCH2CH2COOCH2CH3 is ethyl 4-methylpentanoate. For esters such as ethyl acetate (CH3COOCH2CH3), ethyl formate (HCOOCH2CH3) or dimethyl phthalate that are based on common acids, IUPAC recommends use of these established names, called retained names. The -oate changes to -ate. Some simple examples, named both ways, are shown in the figure above.

If the alkyl group is not attached at the end of the chain, the bond position to the ester group is infixed before “-yl”: CH3CH2CH(CH3)OOCCH2CH3 may be called but-2-yl propanoate or but-2-yl propionate.