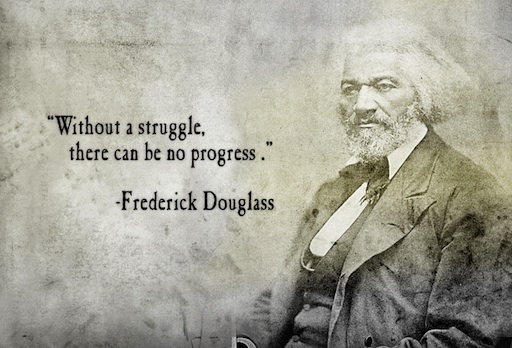 Frederick Douglass was born into slavery in 1818 in Maryland.  He was raised by his grandparents until his grandmother took him to her master's plantation and left him there.  When he was about eight years old, he was sent to Baltimore to live with relatives of his master.  It was shortly after his arrival that his new mistress taught him the alphabet.  When her husband forbade her to teach him any longer, because it was unlawful to teach slaves how to read, Douglass took it upon himself to learn.  The neighborhood boys would teach him how to read in exchange for his food.

At the age of twenty, Douglass escaped from slavery by impersonating a sailor.  He went to Massachusetts with his new wife where he would attend abolitionist meetings.  He became a lecturer for the Anti-Slavery Society, which led him to public speaking and writing.  He published his own newspaper, participated in the first women's rights convention, and wrote three autobiographies.  He also became a trusted advisor to Abraham Lincoln.   (information courtesy of http://www.frederickdouglass.org/)

For this assignment, you will read a portion of one of his autobiographies, The Narrative of the Life of Frederick Douglass.  Specifically, you will be reading a portion called "The Battle with Mr. Covey."  You will read about the time Douglass was sold to a new master and had a bad encounter with the slave breaker, Edward Covey.  The excerpt is attached!

The assignment is also attached (as a Word and PDF document). You may need to do more research on the context of when this was written than what I give you above and in the previous lesson. If you need to, please do so and include a Works Cited page with the assignment.