Binary covalent compounds—that is, covalent compounds that contain only two elements—are named using a procedure similar to that used to name simple ionic compounds, but prefixes are added as needed to indicate the number of atoms of each kind. The procedure, diagrammed in Figure 10.4.1, uses the following steps: 2. Identify the number of each type of atom present.

A List the elements in order according to their positions in the periodic table. Identify the number of each type of atom in the chemical formula and then use Table 10.4.1 to determine the prefixes needed.

B If the compound contains oxygen, follow step 3a. If not, decide whether to use the common name or the systematic name.

List the elements in the same order as in the formula, use Table 10.4.1 to identify the number of each type of atom present, and then indicate this quantity as a subscript to the right of that element when writing the formula.

The structures of some of the compounds in Example 8 and Example 9 are shown in Figure 10.4.2 ", along with the location of the “central atom” of each compound in the periodic table. The compositions and structures of such compounds can be deduced from the rules for covalent bonding, Lewis structures, hybridization, expanded octets and VSEPR discussed in Chapters 4, 5 and 6. and but this is not true. Figure 10.4.2 The Structures of Some Covalent Inorganic Compounds and the Locations of the “Central Atoms” in the Periodic Table

The compositions and structures of covalent inorganic compounds are not random. As you learned in Chapter 4 "The Periodic Table and Periodic Trends" and Chapter 5"Chemical Bonding", they can be predicted from the locations of the component atoms in the periodic table.

Approximately one-third of the compounds produced industrially are organic compounds. All living organisms are composed of organic compounds, as is most of the food you consume, the medicines you take, the fibers in the clothes you wear, and the plastics in the materials you use. Section 10.1 introduced two organic compounds: methane (CH4) and methanol (CH3OH). These and other organic compounds appear frequently in discussions and examples throughout this text.

The detection of organic compounds is useful in many fields. In one recently developed application, scientists have devised a new method called “material degradomics” to make it possible to monitor the degradation of old books and historical documents. As paper ages, it produces a familiar “old book smell” from the release of organic compounds in gaseous form. The composition of the gas depends on the original type of paper used, a book’s binding, and the applied media. By analyzing these organic gases and isolating the individual components, preservationists are better able to determine the condition of an object and those books and documents most in need of immediate protection.

The simplest alkane is methane (CH4), a colorless, odorless gas that is the major component of natural gas. In larger alkanes whose carbon atoms are joined in an unbranched chain (straight-chain alkanes), each carbon atom is bonded to at most two other carbon atoms. The structures of two simple alkanes are shown in Figure 10.4.3 , and the names and condensed structural formulas for the first 10 straight-chain alkanes are in Table 10.4.2. The names of all alkanes end in -ane, and their boiling points increase as the number of carbon atoms increases. As you can see, the longest chain in this compound has five carbon atoms, so it is a derivative of pentane. There are two methyl group branches at one carbon atom and one methyl group at another. Using the lowest possible numbers for the branches gives 2,2,4-trimethylpentane for the systematic name of this compound. Figure 10.4.4 Some Simple (a) Alkenes, (b) Alkynes, and (c) Cyclic Hydrocarbons The positions of the carbon atoms in the chain are indicated by C1 or C2. The name of a compound does not depend on its orientation. As illustrated for 1-butene, both condensed structural formulas and molecular models show different orientations of the same molecule. Don’t let orientation fool you; you must be able to recognize the same structure no matter what its orientation.

The simplest alkyne is acetylene, C2H2 or HC≡CH (part (b) in Figure 10.4.4 ). Because a mixture of acetylene and oxygen burns with a flame that is hot enough (>3000°C) to cut metals such as hardened steel, acetylene is widely used in cutting and welding torches. The names of other alkynes are similar to those of the corresponding alkanes but end in -yne. For example, HC≡CCH3 is propyne, and CH3C≡CCH3 is 2-butyne because the multiple bond begins on the second carbon atom. The simplest aromatic hydrocarbon is benzene (C6H6), which was first obtained from a coal distillate. The word aromatic now refers to benzene and structurally similar compounds. As shown in part (a) in Figure 10.4.6, it is possible to draw the structure of benzene in two different but equivalent ways, depending on which carbon atoms are connected by double bonds or single bonds. We learned that this is a consequence of the p orbitals on each carbon forming a bonding molecular π orbital which extends over the planar carbon chain. Toluene is similar to benzene, except that one hydrogen atom is replaced by a –CH3 group; it has the formula C7H8 (part (b) in Figure 10.4.6 ). As you will soon learn, the chemical behavior of aromatic compounds differs from the behavior of aliphatic compounds. Benzene and toluene are found in gasoline, and benzene is the starting material for preparing substances as diverse as aspirin and nylon.

Figure 10.4.6 Two Aromatic Hydrocarbons: (a) Benzene and (b) Toluene

Figure 10.4.7 illustrates two of the molecular structures possible for hydrocarbons that have six carbon atoms. As you can see, compounds with the same molecular formula can have very different structures. 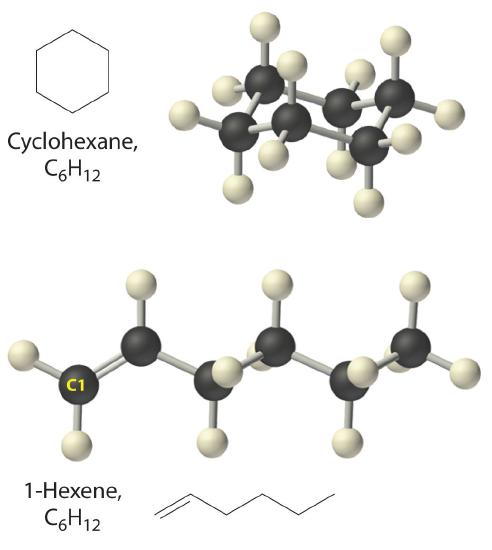 A Use the prefix to determine the number of carbon atoms in the molecule and whether it is cyclic. From the suffix, determine whether multiple bonds are present.

B Identify the position of any multiple bonds from the number(s) in the name and then write the condensed structural formula.

The general name for a group of atoms derived from an alkane is an alkyl group. The name of an alkyl group is derived from the name of the alkane by adding the suffix -yl. Thus the –CH3 fragment is a methyl group, the –CH2CH3 fragment is an ethyl group, and so forth, where the dash represents a single bond to some other atom or group. Similarly, groups of atoms derived from aromatic hydrocarbons are aryl groups, which sometimes have unexpected names. For example, the –C6H5 fragment is derived from benzene, but it is called a phenyl group. In general formulas and structures, alkyl and aryl groups are often abbreviated as RThe abbreviation used for alkyl groups and aryl groups in general formulas and structures.. Replacing one or more hydrogen atoms of a hydrocarbon with an –OH group gives an alcoholA class of organic compounds obtained by replacing one or more of the hydrogen atoms of a hydrocarbon with an −OH group., represented as ROH. The simplest alcohol (CH3OH) is called either methanol (its systematic name) or methyl alcohol (its common name) (see Figure 10.1.4 ). Methanol is the antifreeze in automobile windshield washer fluids, and it is also used as an efficient fuel for racing cars, most notably in the Indianapolis 500. Ethanol (or ethyl alcohol, CH3CH2OH) is familiar as the alcohol in fermented or distilled beverages, such as beer, wine, and whiskey; it is also used as a gasoline additive. The simplest alcohol derived from an aromatic hydrocarbon is C6H5OH, phenol (shortened from phenyl alcohol), a potent disinfectant used in some sore throat medications and mouthwashes.