The relative equilbrium between the carbonyl and gem-diol builds understanding about steric effects in reaction mechanisms.  This relationship is summarized below. 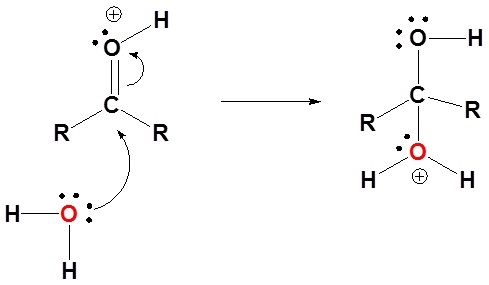 5.  Draw the expected products of the following reactions. 6.  Of the following pairs of molecules which would you expect to form a larger percentage of gem-diol at equilibrium? Please explain your answer.

7.  Would you expect the following molecule to form appreciable amount of gem-diol in water? Please explain your answer.

6.  The compound on the left would. Fluorine is more electronegative than bromine and would remove more electron density from the carbonyl carbon. This would destabilize the carbonyl allowing for more gem-diol to form.

7.  Although ketones tend to not form gem-diols this compound exists almost entirely in the gem-diol form when placed in water. Ketones tend to not form gem-diols because of the stabilizing effect of the electron donating alkyl group. However, in this case the electron donating effects of alkyl group is dominated by the presence of six highly electronegative fluorines.