Amines seldom serve as leaving groups in nucleophilic substitution or base-catalyzed elimination reactions. Indeed, they are even less effective in this role than are hydroxyl and alkoxyl groups. While we will see another section that it is possible to coax the amine to serve as a leaving group. As weak bases, amines are good nucleophiles.

Imine formation is reversible. Imines can be hydrolyzed back to the corresponding primary amine under acidic aqueous conditions.

Most aldehydes and ketones react with 2º-amines to give products known as enamines.

It should be noted that, like acetal and imine formation, these are acid-catalyzed reversible reactions in which water is lost. Consequently, enamines are easily converted back to their carbonyl precursors by acid-catalyzed hydrolysis.

The sulfonyl group is the sulfur-analog to the carbonyl group. Both groups contain an electrophilic carbonyl carbon with chloride as an excellent leaving group. Because sulfur is a third shell element it can form "expanded octets".

Amines react with sulfonyl groups to form sulfonamides. Sulfonamides are used as antimicrobial agents therapeutically and called sulfa drugs. The reaction to form sulfonamides occurs under alkaline conditions to keep the amine nucleophilic. Any time amines are present in an aqueous solution, measurable hydroxide is present. The mechanism for the sulfonation reaction is analogous to the acylation mechanism as is shown below.

The end of this chapter includes some additional information on sulfonamides.

It is instructive to examine nitrogen substitution reactions using common alkyl halides as the electrophiles. Thus, reaction of a primary alkyl bromide with a large excess of ammonia yields the corresponding 1º-amine, presumably by an SN2 mechanism. The hydrogen bromide produced in the reaction combines with some of the excess ammonia, giving ammonium bromide as a by-product. Water does not normally react with 1º-alkyl halides to give alcohols, so the enhanced nucleophilicity of nitrogen relative to oxygen is clearly demonstrated.

It follows that simple amines should also be more nucleophilic than their alcohol or ether equivalents. If, for example, we wish to carry out an SN2 reaction of an alcohol with an alkyl halide to produce an ether (the Williamson synthesis), it is necessary to convert the weakly nucleophilic alcohol to its more nucleophilic conjugate base for the reaction to occur. In contrast, amines react with alkyl halides directly to give N-alkylated products. Since this reaction produces HBr as a co-product, hydrobromide salts of the alkylated amine or unreacted starting amine (in equilibrium) will also be formed.

Unfortunately, the direct alkylation of 1º or 2º-amines to give a more substituted product does not proceed cleanly. If a 1:1 ratio of amine to alkyl halide is used, only 50% of the amine will react because the remaining amine will be tied up as an ammonium halide salt (remember that one equivalent of the strong acid HX is produced). If a 2:1 ratio of amine to alkylating agent is used, as in the above equation, the HX issue is solved, but another problem arises. Both the starting amine and the product amine are nucleophiles. Consequently, once the reaction has started, the product amine competes with the starting material in the later stages of alkylation, and some higher alkylated products are also formed. Even 3º-amines may be alkylated to form quaternary (4º) ammonium salts. When tetraalkyl ammonium salts are desired, as shown in the following example, Hünig's base may be used to scavenge the HI produced in the three SN2 reactions. Steric hindrance prevents this 3º-amine (Hünig's base) from being methylated.

10. Draw the products of the following reactions. 11. Draw the structure of the reactant needed to produce the indicated product. 12. Draw the products for the following reactions.

13. Draw the missing reactant to complete each reaction below. 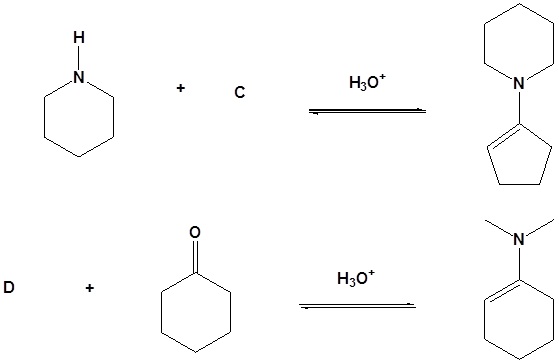