The inflation rate is the percentage change in the price level from one year to the next. In a formula:

The inflation rate by FSCJ is licensed under CC-BY-4.0.

Deflation is when the price level is falling and the inflation rate is negative .

Keep in mind that there is a difference between calculating the CPI and calculating the inflation rate. Don’t confuse the two! To graphically notice the difference, CPI is generally an upward sloping curve, as prices, overall, tend to increase from year to year in any economy. However, the rate of growth of these price increases is not the same every year, which means the inflation rate graph shows several ups and downs. (1)

Historical Inflation and Hyperinflation Around the World

In the last three decades, inflation has been relatively low in the U.S. economy, with the Consumer Price Index typically rising 2% to 4% per year. Looking back over the twentieth century, there have been several periods where inflation caused the price level to rise at double-digit rates, but nothing has come close to hyperinflation.

Figure 5.1 shows that the U.S. price level rose relatively little over the first half of the twentieth century, followed by more substantial increases in recent decades. Inflation during the twentieth century was highest just after World Wars â…  and â…¡, and during the 1970s. Deflation occurred several times in the first half of the century and in 2009. For the most part, inflation rates in the U.S. since the 1990s have been in the low single digits. Inflation around the World 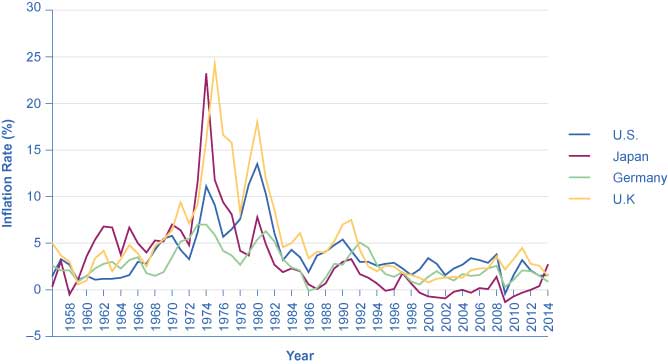 Figure 5.2 shows the annual percentage change in consumer prices compared with the previous year’s consumer prices in the United States, the United Kingdom, Japan, and Germany. Countries with controlled economies in the 1970s, like the Soviet Union and China, historically had very low rates of measured inflation—because prices were forbidden to rise by law, except for the cases where the government deemed a price increase to be due to quality improvements. However, these countries also had perpetual shortages of goods, since forbidding prices to rise acts like a price ceiling and creates a situation where quantity demand often exceeds quantity supplied.

As Russia and China made a transition toward more market-oriented economies, they also experienced high rates of inflation. Inflation in China averaged about 10% per year for much of the 1980s and early 1990s, although it has dropped off since then. Russia experienced hyperinflation of 2,500% per year in the early 1990s. The closest the United States has ever gotten to hyperinflation was during the Civil War, 1860–1865, in the Confederate states.

Many countries in Latin America experienced raging hyperinflation during the 1980s and early 1990s, with inflation rates often well above 100% per year. In 1990, for example, both Brazil and Argentina saw inflation climb above 2000%. Certain countries in Africa experienced extremely high rates of inflation, sometimes bordering on hyperinflation, in the 1990s. Nigeria, the most populous country in Africa, had an inflation rate of 75% in 1995. (15)