Over reaction of Aniline and Phenol

The strongest activating and ortho/para-directing substituents are the amino (-NH2) and hydroxyl (-OH) groups. Direct nitration of phenol (hydroxybenzene) by dilute nitric acid gives modest yields of nitrated phenols and considerable oxidative decomposition to tarry materials; aniline (aminobenzene) is largely destroyed. Bromination of both phenol and aniline is difficult to control, with di- and tri-bromo products forming readily. Because of their high nucleophilic reactivity, aniline and phenol undergo substitution reactions with iodine, a halogen that is normally unreactive with benzene derivatives. The mixed halogen iodine chloride (ICl) provides a more electrophilic iodine moiety, and is effective in iodinating aromatic rings having less powerful activating substituents.

By acetylating the heteroatom substituent on phenol and aniline, its activating influence can be substantially attenuated. For example, acetylation of aniline gives acetanilide (first step in the following equation), which undergoes nitration at low temperature, yielding the para-nitro product in high yield. The modifying acetyl group can then be removed by acid-catalyzed hydrolysis (last step), to yield para-nitroaniline. Although the activating influence of the amino group has been reduced by this procedure, the acetyl derivative remains an ortho/para-directing and activating substituent.

The following diagram illustrates how the acetyl group acts to attenuate the overall electron donating character of oxygen and nitrogen. The non-bonding valence electron pairs that are responsible for the high reactivity of these compounds (blue arrows) are diverted to the adjacent carbonyl group (green arrows). However, the overall influence of the modified substituent is still activating and ortho/para-directing. 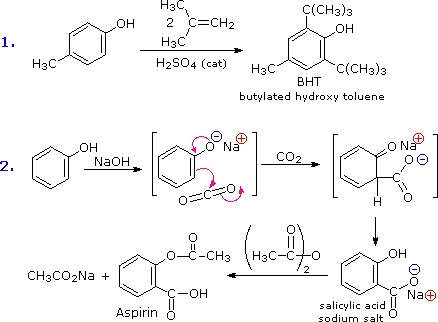