These are homework exercises to accompany Chapter 1 of Vollhardt and Schore's "Organic Chemistry" Textmap.

1.1: The Scope of Organic Chemistry: An Overview

1.6: Atomic Orbitals: A Quantum Mechanical Description of Electrons Around the Nucleus

Draw the Lewis Structures of the following molecules, and if necessary assign charges.

In problem 25 identify the polar covalent bonds with δ+ and δ- on the atoms according to their electronegativity.

Draw the Lewis Structures of the following species, and if necessary assign charges.

Add charges to the following Lewis Structures, if neutral do not add any charges.

Acetic acid is a common household acid once deprotonated it forms an anion with resonance structures possible. Draw these with electron-pushing arrows.

Draw all possible resonance structures of the following species.

Draw the Lewis structure for each compound.

Predict the geometry for each red-highlighted atom and give the hybridization of that center.

Draw the hybridized orbitals for each of the highlighted carbons in problem 35.

Determine the hybridization of each carbon based on the shape of each molecule.

Draw the Kekule structures for the following molecules, an example is given below.

Draw the Kekule structures for the following molecules.

Give the condensed structures for the following Kekulé structures. In the previous problem, 42, draw the Kekulé structures as bond line structures.

Draw line-bond structures of the following pairs of species and include all charges. Are any of the pairs resonance forms of the other species in the pair? If not explain the difference

The following boron-halogen compounds have resonance structures possible. Draw them and in each compound indicate which structure is favored (hint: the octet rule takes precedent). Also, compare the relative energy levels of the three favored resonance structures, which is favored/lowest in energy?

Using the formula for the degrees of each angle, [(n-2)*180]/n, where n equals the number of sides, determine the angles in each of the following shapes. If the given shapes were considered bond-line structures, order them from highest to lowest favorability based on the angles (The best overlap in sp3 hybridized carbon is at 104.5o). Compare this answer to the following ring strain energies of each: cyclopropane (triangle)- 27.5 kcal/mol cyclobutane (square)- 26.3 kcal/mol cyclopentane (pentagon)- 6.2 kcal/mol cyclohexane (hexagon)-0.1 kcal/mol.

Based on their relative energy, which species would it be most favorable to undergo the following dissociation (HA represents the neutral hydrocarbon)?

In each set which of the following positively polarized carbon bond atoms is the most electropositive?

As drawn, which of the following is a correct formal charge assignment?

The highlighted bond is formed by the interaction between what two orbitals?

Which highlighted carbon center has the smallest bond angles?

Which pair of structures are resonance hybrids? 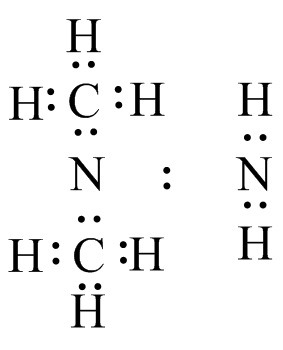 The lone pair is shared between the two N atoms. Acetic acid has one additional resonance structure possible, again a reason for its moderate acidity.

The resonance structure with no charges is the major contributor.

Again, the resonance structure with no charges is the major contributor.

Each resonance structure is equivalent, so there is no "major contributor". 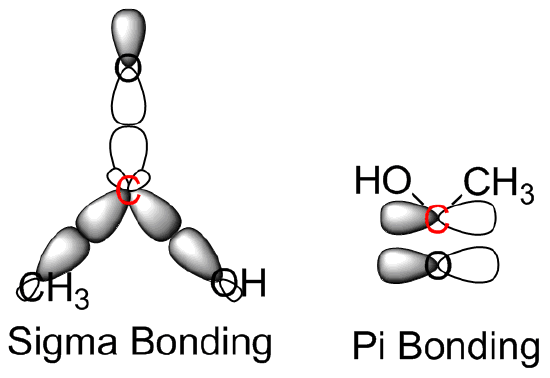 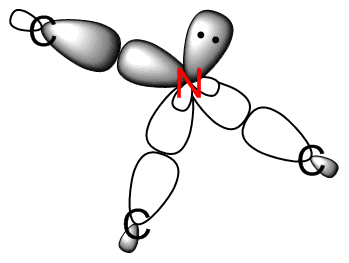 Each carbon's hybridization is listed from left to right in the chemical formula. the two structures are identical (b)

These are not resonance structures; there additional H atoms. (c)

These are not resonance structures; there are three additional H atoms.

In each case the double bonded resonance structure is preferred, due to the octet rule being fulfilled.

In reality this is due to different conformations of the shapes, so that the hexagon and pentagon are no longer flat/planar. This will be covered in more detail later on.

The order of energy is as follows, or increasing p character. CH3CC-<CH3CHCH-<CH3CH2CH2-

The reaction would be most favorable if the A- is lowest in energy, so, the order of favorability is the reverse of above. CH3CH2CH2-<CH3CHCH-<CH3CC-

(c) (CH3)3C+ The additional hydrocarbons on the ethyl group do marginally hyperconjugate and donate electrons to the center carbon, making it less electropositive.

In this structure any sp3 carbon connected to a heteroatom would be a polarized bond.

In this structure this is the only highly polarized double bond.

Any double bonded carbon could be considered sp2 hybridized.

This is the only sp hybridized carbon.

The hybridization changes from sp2 to sp3.

(d) is correct, boron typically has 3 valence electrons. It currently is bonded to four different atoms; it has an octet. 8/2=4 electrons, and 3-4=-1 formal charge.

(b) This is the only sp3 hybridized highlighted carbon, characterized by bond angles of 104.5o. Which is less than both sp2 and sp, 120o and 180o respectively.

(c) The number of electrons is the same and all atoms are in the same locations. Placement of charges is important to look at; in the pairs with no charges present then some atoms were moved around.

1.9: Structures and Formulas of Organic Molecules