It isn’t easy to comprehend the scale on which the chemical industry must operate to supply the huge amounts of chemicals required in modern industrial societies. Figure 7.7.1 lists the names and formulas of the chemical industry’s “top 25” for 2002—the 25 chemicals produced in the largest quantity in the United States that year—along with the amounts produced, in billions of pounds. To put these numbers in perspective, consider that the 88.80 billion pounds of sulfuric acid produced in the United States in 2002 has a volume of 21.90 million cubic meters (2.19 × 107 m3), enough to fill the Pentagon, probably the largest office building in the world, about 22 times. Why are such huge quantities of chemical compounds produced annually? They are used both directly as components of compounds and materials that we encounter on an almost daily basis and indirectly in the production of those compounds and materials. The single largest use of industrial chemicals is in the production of foods: 7 of the top 15 chemicals are either fertilizers (ammonia, urea, and ammonium nitrate) or used primarily in the production of fertilizers (sulfuric acid, nitric acid, nitrogen, and phosphoric acid). Many of the organic chemicals on the list are used primarily as ingredients in the plastics and related materials that are so prevalent in contemporary society. Ethylene and propylene, for example, are used to produce polyethylene and polypropylene, which are made into plastic milk bottles, sandwich bags, indoor-outdoor carpets, and other common items. Vinyl chloride, in the form of polyvinylchloride, is used in everything from pipes to floor tiles to trash bags. Though not listed in Figure 7.7.1 , butadiene and carbon black are used in the manufacture of synthetic rubber for tires, and phenol and formaldehyde are ingredients in plywood, fiberglass, and many hard plastic items.

We do not have the space in this text to consider the applications of all these compounds in any detail, but we will return to many of them after we have developed the concepts necessary to understand their underlying chemistry. Instead, we conclude this chapter with a brief discussion of petroleum refining as it relates to gasoline and octane ratings and a look at the production and use of the topmost industrial chemical, sulfuric acid.

The petroleum that is pumped out of the ground at locations around the world is a complex mixture of several thousand organic compounds, including straight-chain alkanes, cycloalkanes, alkenes, and aromatic hydrocarbons with four to several hundred carbon atoms. The identities and relative abundances of the components vary depending on the source. So Texas crude oil is somewhat different from Saudi Arabian crude oil. In fact, the analysis of petroleum from different deposits can produce a “fingerprint” of each, which is useful in tracking down the sources of spilled crude oil. For example, Texas crude oil is “sweet,” meaning that it contains a small amount of sulfur-containing molecules, whereas Saudi Arabian crude oil is “sour,” meaning that it contains a relatively large amount of sulfur-containing molecules.

Petroleum is converted to useful products such as gasoline in three steps: distillation, cracking, and reforming. Recall from Chapter 1 that distillation separates compounds on the basis of their relative volatility, which is usually inversely proportional to their boiling points. Part (a) in Figure 7.7.2 shows a cutaway drawing of a column used in the petroleum industry for separating the components of crude oil. The petroleum is heated to approximately 400°C (750°F), at which temperature it has become a mixture of liquid and vapor. This mixture, called the feedstock, is introduced into the refining tower. The most volatile components (those with the lowest boiling points) condense at the top of the column where it is cooler, while the less volatile components condense nearer the bottom. Some materials are so nonvolatile that they collect at the bottom without evaporating at all. Thus the composition of the liquid condensing at each level is different. These different fractions, each of which usually consists of a mixture of compounds with similar numbers of carbon atoms, are drawn off separately. Part (b) in Figure 7.7.2 shows the typical fractions collected at refineries, the number of carbon atoms they contain, their boiling points, and their ultimate uses. These products range from gases used in natural and bottled gas to liquids used in fuels and lubricants to gummy solids used as tar on roads and roofs.

Figure 7.7.2 The Distillation of Petroleum

(a) This is a diagram of a distillation column used for separating petroleum fractions. (b) Petroleum fractions condense at different temperatures, depending on the number of carbon atoms in the molecules, and are drawn off from the column. The most volatile components (those with the lowest boiling points) condense at the top of the column, and the least volatile (those with the highest boiling points) condense at the bottom.

Figure 7.7.3 The Burning of Gasoline in an Internal Combustion Engine 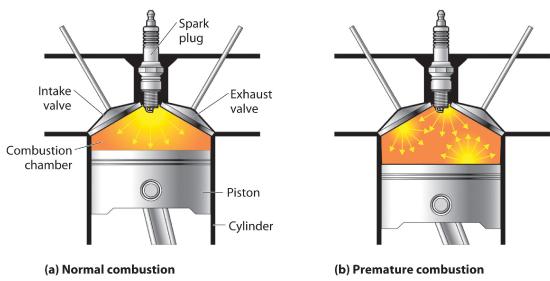 (a) Normally, fuel is ignited by the spark plug, and combustion spreads uniformly outward. (b) Gasoline with an octane rating that is too low for the engine can ignite prematurely, resulting in uneven burning that causes knocking and pinging.

As shown in Figure 7.7.4, many compounds that are now available have octane ratings greater than 100, which means they are better fuels than pure isooctane. In addition, antiknock agents, also called octane enhancers, have been developed. One of the most widely used for many years was tetraethyllead [(C2H5)4Pb], which at approximately 3 g/gal gives a 10–15-point increase in octane rating. Since 1975, however, lead compounds have been phased out as gasoline additives because they are highly toxic. Other enhancers, such as methyl t-butyl ether (MTBE), have been developed to take their place. They combine a high octane rating with minimal corrosion to engine and fuel system parts. Unfortunately, when gasoline containing MTBE leaks from underground storage tanks, the result has been contamination of the groundwater in some locations, resulting in limitations or outright bans on the use of MTBE in certain areas. As a result, the use of alternative octane enhancers such as ethanol, which can be obtained from renewable resources such as corn, sugar cane, and, eventually, corn stalks and grasses, is increasing.

Figure 7.7.4 The Octane Ratings of Some Hydrocarbons and Common Additives You have a crude (i.e., unprocessed or straight-run) petroleum distillate consisting of 10% n-heptane, 10% n-hexane, and 80% n-pentane by mass, with an octane rating of 52. What percentage of MTBE by mass would you need to increase the octane rating of the distillate to that of regular-grade gasoline (a rating of 87), assuming that the octane rating is directly proportional to the amounts of the compounds present? Use the information presented in Figure 7.7.4.

Asked for: percentage of MTBE by mass in final mixture

C Solve for the unknown to obtain the percentage of MTBE needed.

To obtain a composition of 55% MTBE by mass, you would have to add more than an equal mass of MTBE (actually 0.55/0.45, or 1.2 times) to the straight-run fraction. This is 1.2 tons of MTBE per ton of straight-run gasoline, which would be prohibitively expensive. Thus there are sound economic reasons for reforming the kerosene fractions to produce toluene and other aromatic compounds, which have high octane ratings and are much cheaper than MTBE.

As shown in Figure 7.7.4 , toluene is one of the fuels suitable for use in automobile engines. How much toluene would have to be added to a blend of the petroleum fraction in this example containing 15% MTBE by mass to increase the octane rating to that of premium gasoline (93)?

Sulfuric acid is one of the oldest chemical compounds known. It was probably first prepared by alchemists who burned sulfate salts such as FeSO4·7H2O, called green vitriol from its color and glassy appearance (from the Latin vitrum, meaning “glass”). Because pure sulfuric acid was found to be useful for dyeing textiles, enterprising individuals looked for ways to improve its production. By the mid-18th century, sulfuric acid was being produced in multiton quantities by the lead-chamber process, which was invented by John Roebuck in 1746. In this process, sulfur was burned in a large room lined with lead, and the resulting fumes were absorbed in water.

The production of sulfuric acid today is likely to start with elemental sulfur obtained through an ingenious technique called the Frasch process, which takes advantage of the low melting point of elemental sulfur (115.2°C). Large deposits of elemental sulfur are found in porous limestone rocks in the same geological formations that often contain petroleum. In the Frasch process, water at high temperature (160°C) and high pressure is pumped underground to melt the sulfur, and compressed air is used to force the liquid sulfur-water mixture to the surface (Figure 7.7.5). The material that emerges from the ground is more than 99% pure sulfur. After it solidifies, it is pulverized and shipped in railroad cars to the plants that produce sulfuric acid, as shown here. Transporting sulfur. A train carries elemental sulfur through the White Canyon of the Thompson River in British Columbia, Canada. In the Frasch process for extracting sulfur, very hot water at high pressure is injected into the sulfur-containing rock layer to melt the sulfur. The resulting mixture of liquid sulfur and hot water is forced up to the surface by compressed air.

An increasing number of sulfuric acid manufacturers have begun to use sulfur dioxide (SO2) as a starting material instead of elemental sulfur. Sulfur dioxide is recovered from the burning of oil and gas, which contain small amounts of sulfur compounds. When not recovered, SO2 is released into the atmosphere, where it is converted to an environmentally hazardous form that leads to acid rain (Chapter 8 ).

Two-thirds of the sulfuric acid produced in the United States is used to make fertilizers, most of which contain nitrogen, phosphorus, and potassium (in a form called potash). In earlier days, phosphate-containing rocks were simply ground up and spread on fields as fertilizer, but the extreme insolubility of many salts that contain the phosphate ion (PO43−) limits the availability of phosphorus from these sources. Sulfuric acid serves as a source of protons (H+ ions) that react with phosphate minerals to produce more soluble salts containing HPO42− or H2PO4− as the anion, which are much more readily taken up by plants. In this context, sulfuric acid is used in two principal ways: (1) the phosphate rocks are treated with concentrated sulfuric acid to produce “superphosphate,” a mixture of 32% CaHPO4 and Ca(H2PO4)2·H2O, 50% CaSO4·2H2O, approximately 3% absorbed phosphoric acid, and other nutrients; and (2) sulfuric acid is used to produce phosphoric acid (H3PO4), which can then be used to convert phosphate rocks to “triple superphosphate,” which is largely Ca(H2PO4)2·H2O.

Sulfuric acid is also used to produce potash, one of the other major ingredients in fertilizers. The name potash originally referred to potassium carbonate (obtained by boiling wood ashes with water in iron pots), but today it also refers to compounds such as potassium hydroxide (KOH) and potassium oxide (K2O). The usual source of potassium in fertilizers is actually potassium sulfate (K2SO4), which is produced by several routes, including the reaction of concentrated sulfuric acid with solid potassium chloride (KCl), which is obtained as the pure salt from mineral deposits.

Many chemical compounds are prepared industrially in huge quantities and used to produce foods, fuels, plastics, and other such materials. Petroleum refining takes a complex mixture of naturally occurring hydrocarbons as a feedstock and, through a series of steps involving distillation, cracking, and reforming, converts them to mixtures of simpler organic compounds with desirable properties. A major use of petroleum is in the production of motor fuels such as gasoline. The performance of such fuels in engines is described by their octane rating, which depends on the identity of the compounds present and their relative abundance in the blend.