Carbon is unique among the elements of the periodic table because of the ability of its atoms to form strong bonds with one another while still having one or more valences left over to link to other atoms. The strength of the carbon-carbon bond permits long chains to form:

This behavior is referred to as catenation. Such a chain contains numerous sites to which other atoms (or more carbon atoms) can bond, leading to a great variety of carbon compounds, or organic compounds. The hydrocarbons contain only hydrogen and carbon. They provide the simplest examples of how catenation, combined with carbon’s valence of 4, gives rise to a tremendous variety of molecular structures, even with only two elements involved. Single bonded hydrocarbons are called alkanes. A example of an alkane is butane:

These hydrocarbons can be in straight chains of varying length, or they can branch out, with one carbon bonded to three or four other carbons. This allows for isomers, such as iso-butane, a branched hydrocarbon:

Hydrocarbons can also form ring structures, which are referred to as cycloalkanes. An example is cyclohexane:

Together, they are referred to as unsaturated hydrocarbons, since there are fewer hydrogen atoms in the molecule due to multiple bonds as compared to alkanes. A special class of multiple bond hydrocarbons are the aromatic hydrocarbons, which all take the form of hydrocarbon ring structures with double bonds between the carbons. Benzene is an example:

Following is a short overview of the the different fractions from petroleum[1] .

The gas fraction contains hydrocarbons containing 1 to 4 carbon atoms in each molecule. These can be used for fuels. Another use is to derive materials such as plastics and synthetic fibers from such hydrocarbons, accomplished by polymerization techniques. An example is given below, propane: Ball and stick model of propane

Probably the most familiar of the hydrocarbon distillates is gasoline. Gasoline consists of hydrocarbons with 5 to 12 carbon atoms in each molecule. It is difficult to overstate the importance of gasoline to modern society, given the central role of automobile travel in our society. Gasoline also serves as an industrial solvent. An example of a hydrocarbon found in gasoline is toluene: 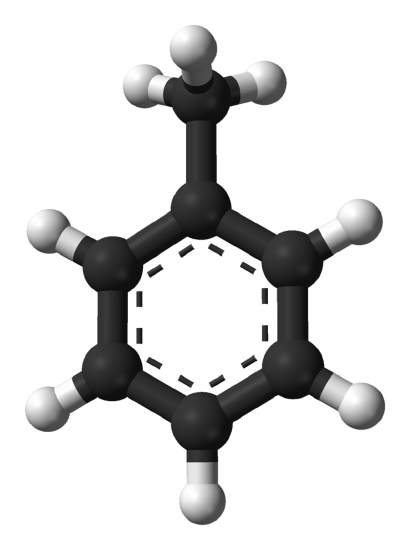 Kerosene consists of hydrocarbons containing between 12 and 16 carbon atoms per molecule. The foremost uses of kerosene are as lamp oil, diesel fuel, and for catalytic cracking, a processes discussed in the section on unsaturated hydrocarbons. This allows these larger hydrocarbons to be broken down to a size that can be used for gasoline. An example of a hydrocarbon that would be in the kerosene fraction is tetradecane:

Ball-and-stick model of the tetradecane molecule

Fuel Oils consist of hydrocarbons ranging between 15 and 18 carbon atoms per molecule. Like kerosene, this distillate is used for heating oil, for diesel fuel, and for catalytic cracking. An example is hexadecane:

Ball-and-stick model of the hexadecane molecule

Ball and stick model of the icosane molecule

Hydrocarbons which are not boiled away remain after the distillation as hydrocarbons with more than 20 carbon atoms per molecule. These hydrocarbons can be used as asphalt. An example is tetracosane: