A carcinogen is any agent that directly increases the incidence of cancer. Most, but not all carcinogens are mutagens. Carcinogens that do not directly damage DNA include substances that accelerate cell division, thereby leaving less opportunity for cell to repair induced mutations, or errors in replication. Carcinogens that act as mutagens may be biological, physical, or chemical in nature, although the term is most often used in relation to chemical substances.

Cancer is actually a group of more than 100 diseases, all of which involve abnormal cell growth with the potential to invade or spread to other parts of the body. In general terms, cancer occurs when the cell cycle is no longer regulated due to DNA damage. The number of potential underlying causes of this DNA damage is great, so there are many different risk factors for cancer. Any cells that become cancerous divide more quickly than normal cells. They may form a mass of abnormal cells called a tumor. The rapidly dividing cells take up nutrients and space, damaging the normal cells around them. If the cancer cells spread to other parts of the body, they invade and damage other tissues and organs. They may eventually lead to death. By far, the most common of the 100-plus types of human cancer is basal cell carcinoma, the type of skin cancer Bernie Sanders had removed in 2016. Basal cell carcinoma makes up 40 percent of all new cancers each year in the United States. Other common types of cancer include lung, colorectal, prostate (in males), and breast (in females) cancers. These cancers are not as common as skin cancer, but they cause the majority of cancer deaths.

Carcinogenesis, also called oncogenesis or tumorigenesis, is the formation of a cancer, whereby normal cells are transformed into cancer cells.  The transformation of a normal cell into a cancer cell is a multi-step process that involves initiation, promotion, progression and finally malignancy (see Figure \(\PageIndex{2}\)). This process takes years and starts with a single cell in which the right genes are mutated so the cell does not appropriately die and begins to proliferate abnormally. Then, additional mutations occur that select for more rapidly growing cells within this population leading to a tumor with rapid growth and malignancy. By the time the cells are cancerous, proto-oncogenes have been activated and tumor suppressor genes inactivated. Even within the same tumor type, like colon cancer, the specific genes mutated can vary from person to person making cancer a unique disease for each individual.

Figure \(\PageIndex{2}\): Multistep process involved in carcinogenesis that transforms a normal cell into a malignant tumor.

The third way cancer cells can spread is through the blood to distant sites. This is called metastasis, and the new cancers that form are called metastases. Although the blood can carry cancer cells to tissues everywhere in the body, cancer cells generally grow only in certain sites (Figure \(\PageIndex{3}\)). Different types of cancers tend to metastasize to particular organs. The most common places for metastases to occur are the brain, lungs, bones, and liver. Almost all cancers can metastasize, especially during the late stages of the disease. Cancer that has metastasized generally has the worst prognosis and is associated with most cancer deaths. Chemical carcinogens (Table \(\PageIndex{1}\)) can be either natural or synthetic compounds that, based on animal feeding trials or epidemiological (i.e. human population) studies, increase the incidence of cancer. The definition of a chemical as a carcinogen is problematic for several reasons. Some chemicals become carcinogenic only after they are metabolized into another compound in the body; not all species or individuals may metabolize chemicals in the same way. Also, the carcinogenic properties of a compound are usually dependent on its dose. It can be difficult to define a relevant dose for both lab animals and humans. Nevertheless, when a correlation between cancer incidence and chemical exposure is observed, it is usually possible to find ways to reduce exposure to that chemical.

The carcinogens implicated as the main causative agents of the four most common cancers worldwide are given in the table below. These four cancers are lung, breast, colon, and stomach cancers. Together they account for about 41% of worldwide cancer incidence and 42% of cancer deaths.

Note:  A more detailed description for each major carcinogen listed in Table \(\PageIndex{2}\) can be found on the link below

In genetics, a mutagen is a physical or chemical agent that permanently changes genetic material, usually DNA, in an organism and thus increases the frequency of mutations above the natural background level. As many mutations can cause cancer, such mutagens are therefore carcinogens, although not all necessarily are.  Many different systems for detecting mutagen have been developed.[54][55] Animal systems may more accurately reflect the metabolism of human, however, they are expensive and time-consuming (may take around three years to complete), they are therefore not used as a first screen for mutagenicity or carcinogenicity.

The Ames test is a widely employed method that uses bacteria to test whether a given chemical can cause mutations in the DNA of the test organism. More formally, it is a biological assay to assess the mutagenic potential of chemical compounds.[1] A positive test indicates that the chemical is mutagenic and therefore may act as a carcinogen, because cancer is often linked to mutation. The test serves as a quick and convenient assay to estimate the carcinogenic potential of a compound because standard carcinogen assays on mice and rats are time-consuming (taking two to three years to complete) and expensive. However, false-positives and false-negatives are known.  Other tests, similar to the Ames tests have also been developed using yeast and other bacteria.

Drosophila, plants, and cell cultures have been used in various test assays for mutagenecity of chemicals.

In animal test systems, rodents are usually used in animal test. The chemicals under test are usually administered in the food and in the drinking water, but sometimes by dermal application, by gavage, or by inhalation, and carried out over the major part of the life span for rodents.  Transgenic mouse assay using a mouse strain infected with a viral shuttle vector is another method for testing mutagens. Animals are first treated with suspected mutagen, the mouse DNA is then isolated and the phage segment recovered and used to infect E. coli.

A teratogen is a compound that permanently deforms the function or structure of a developing embryo or fetus in utero. In general, the degree of teratogenicity depends on:

The global average of all live births complicated by malformation is 6% (Environmental Health Perspectives, (NIH), October 2009). The majority of these complications are due to unknown factors. The vast majority of recognized etiologies are genetic, with only 10% being attributed to environmental etiologies such as maternal health, infection, and toxicants. In general, the central nervous and skeletal systems are the most affected.

Thalidomide (a sedative previously marketed in Europe to prevent morning sickness) see Figure \(\PageIndex{4}\)is a classic teratogen that caused limb defects in babies born to women who took this drug in the 1960s (see Figure \(\PageIndex{5}\)). Thalidomide was first marketed in 1957 in West Germany, where it was available over the counter.[5][6] When first released, thalidomide was promoted for anxiety, trouble sleeping, "tension", and morning sickness.[6][7] While initially deemed to be safe in pregnancy, concerns regarding birth defects were noted in 1961 and the medication was removed from the market in Europe that year.[6][5] The total number of people affected by use during pregnancy is estimated at 10,000, of which about 40% died around the time of birth.[6][3] Those who survived had limb, eye, urinary tract, and heart problems.[5] 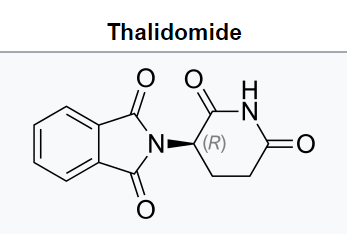 Its initial entry into the US market was prevented by Frances Kelsey at the FDA.[7] The birth defects of thalidomide led to the development of greater drug regulation and monitoring in many countries. in 2006 the U.S. Food and Drug Administration granted accelerated approval for thalidomide in combination with dexamethasone for the treatment of newly diagnosed multiple myeloma patients. 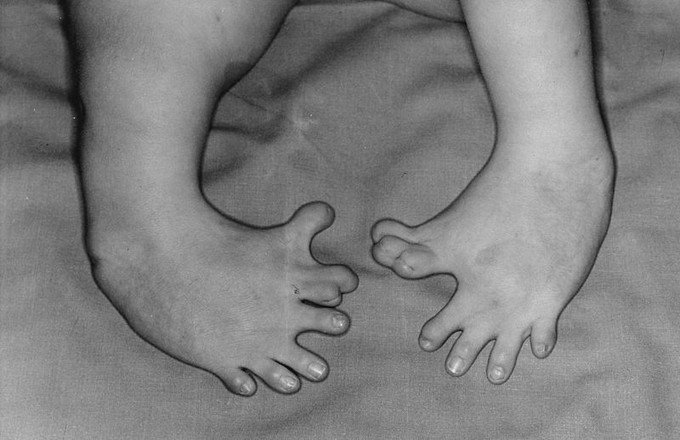 Figure \(\PageIndex{5}\). Thalidomide effects: A photograph of the limbs ofbaby born to a mother who took thalidomide while pregnant.

Women may encounter a number of other teratogens. Smoking is most likely to cause growth retardation, but has also been implicated in the prelabor rupture of the membranes, preterm labor, abruption of the placenta, spontaneous abortion, perinatal morbidity and mortality, and sudden infant death syndrome. Smoking may exert its effects through competitive binding of carbon monoxide with hemoglobin and/or through the various other components found in cigarettes that cause adverse biological effects.

Alcohol use in pregnancy may result in fetal alcohol syndrome (FAS) see Figure \(\PageIndex{6}\), which occurs in approximately 1% of all births. Children with FAS present with a flattened and thin upper lip, small palpebral fissures, epicanthal folds, flattened nasal bridge, and a short nose. They may also exhibit microcephaly, mental retardation, and have learning disabilities. It is not clear if there is any safe amount of alcohol consumption in pregnancy. 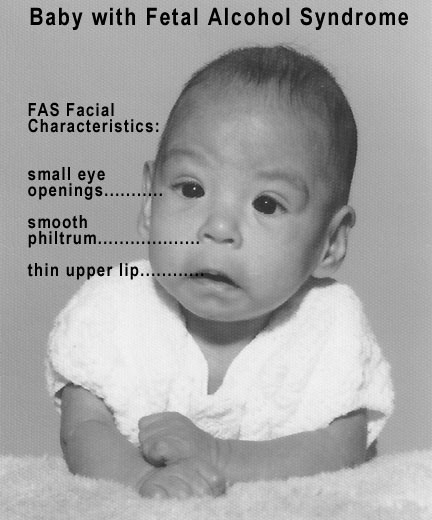 Figure \(\PageIndex{6}\). Fetal alcohol syndrome: Alcohol is a teratogen. When consumed in pregnancy, it can result in mothers giving birth to children with fetal alcohol syndrome. The facial characteristics highlighted in the photograph are small eye opening, smooth philtrum, and a thin upper lip.

Isotretinoin (Accutane), used to treat acne, may cause cardiac, oral, otological, thymic, and central nervous system abnormalities. In one quarter of cases, it causes mental retardation.

Other teratogenic substance classes and conditions include

Libretexts: An Introduction to Nutrition (Byerley)