In a battery (also known as a galvanic cell), current is produced when electrons flow externally through the circuit from one substance to the another substance because of a difference in potential energy between the two substances in the electrochemical cell. In a battery made of Zn and Cu, the valence electrons in zinc have a substantially higher potential energy than the valence electrons in copper. Thus,  electrons flow spontaneously from zinc to copper(II) ions, forming zinc(II) ions and metallic copper. Just like water flowing spontaneously downhill, which can be made to do work by forcing a waterwheel, the flow of electrons from a higher potential energy to a lower one can also be harnessed to perform work. Because the potential energy of valence electrons differs greatly from one substance to another, the voltage of a battery depends partly on the identity of the reacting substances. If we construct a battery similar to the one in part (a) in Figure \(\PageIndex{1}\) but instead of copper use a strip of cobalt metal and 1 M Co2+, the measured voltage is not 1.10 V but 0.51 V. Thus we can conclude that the difference in potential energy between the valence electrons of cobalt and zinc is less than the difference between the valence electrons of copper and zinc by 0.59 V.

The measured potential of a cell also depends strongly on the concentrations of the reacting species and the temperature of the system.

A typical battery contains two solid electrodes, which act as the interfaces between a chemical reaction and the external wires through which electrons will flow. There must always be two electrodes because the electrons must be able to travel over a complete circuit. The electrons leave the chemical reaction at the anode, which is the electrode at which oxidation (the loss of electrons) occurs. The electrons travel from the anode, through wires into the device (light bulb, phone, etc.), and then back through more wires to the cathode, which is the electrode at which reduction (the gain of electrons) occurs. Figure \(\PageIndex{2}\) shows a simple battery made from the zinc and copper system described above. Notice that the electrons carry negative charge through the external wires, but there are no electrons in the battery solution. Inside the battery, ions carry the charge. Anions flow toward the zinc electrode, the electrode at which oxidation occurs. This electrode is called the anode. At the anode, the zinc atoms lose electrons, which leave the battery through the wires. The zinc ions that form enter the solution. The copper cations on the other side of the battery flow towards the other electrode, called the cathode. At the cathode, the copper cations pick up electrons and are reduced to copper metal. The two sides of the battery are kept separate by the porous disk. Only the anions can make it through the disk. If this battery were allowed to run for a long time, the solid zinc anode would become much smaller as zinc atoms were oxidized. At the same time, the copper cathode would get much bigger because copper ions would be getting reduced to form more copper solid on the surface of the cathode.

The lead–acid battery is a common battery used to provide the starting power in virtually every automobile and marine engine on the market. Marine and car batteries typically consist of multiple cells connected in series. The total voltage generated by the battery is the potential per cell (E°cell) times the number of cells. 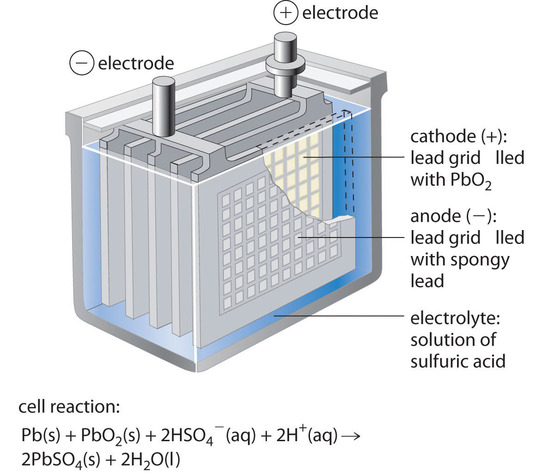 Figure \(\PageIndex{3}\): One Cell of a Lead–Acid Battery. The anodes in each cell of a rechargeable battery are plates or grids of lead containing spongy lead metal, while the cathodes are similar grids containing powdered lead dioxide (PbO2). The electrolyte is an aqueous solution of sulfuric acid. The value of E° for such a cell is about 2 V. Connecting three such cells in series produces a 6 V battery, whereas a typical 12 V car battery contains six cells in series. When treated properly, this type of high-capacity battery can be discharged and recharged many times over.

As shown in Figure \(\PageIndex{3}\), the anode of each cell in a lead storage battery is a plate or grid of spongy lead metal, and the cathode is a similar grid containing powdered lead dioxide (\(PbO_2\)). The electrolyte is usually an approximately 37% solution (by mass) of sulfuric acid in water, with a density of 1.28 g/mL (about 4.5 M \(H_2SO_4\)). Because the redox active species are solids, there is no need to separate the electrodes. The electrode reactions in each cell during discharge are as follows:

In an electrolytic cell, however, the opposite process, called electrolysis, occurs: an external voltage is applied to drive a nonspontaneous reaction. In this section, we look at how electrolytic cells are constructed and explore one of their many commercial applications.

Because \( E^°_{cell} < 0\), the overall reaction—the reduction of \(Cd^{2+}\) by \(Cu\)—clearly cannot occur spontaneously and proceeds only when sufficient electrical energy is applied.