The term oxidation was first used to describe reactions in which metals react with oxygen in air to produce metal oxides. When iron is exposed to air in the presence of water, for example, the iron turns to rust—an iron oxide. When exposed to air, aluminum metal develops a continuous, transparent layer of aluminum oxide on its surface. In both cases, the metal acquires a positive charge by transferring electrons to the neutral oxygen atoms of an oxygen molecule. As a result, the oxygen atoms acquire a negative charge and form oxide ions (O2−). Because the metals have lost electrons to oxygen, they have been oxidized; oxidation is therefore the loss of electrons. Conversely, because the oxygen atoms have gained electrons, they have been reduced, so reduction is the gain of electrons. For every oxidation, there must be an associated reduction. Therefore, these reactions are known as oxidation-reduction reactions, or "redox" reactions for short.

Originally, the term reduction referred to the decrease in mass observed when a metal oxide was heated with carbon monoxide, a reaction that was widely used to extract metals from their ores. When solid copper(I) oxide is heated with hydrogen, for example, its mass decreases because the formation of pure copper is accompanied by the loss of oxygen atoms as a volatile product (water vapor). The reaction is as follows:

Oxidation-reduction reactions are now defined as reactions that exhibit a change in the oxidation states of one or more elements in the reactants by a transfer of electrons, which follows the mnemonic "oxidation is loss, reduction is gain", or "oil rig". The oxidation state of each atom in a compound is the charge an atom would have if all its bonding electrons were transferred to the atom with the greater attraction for electrons. Atoms in their elemental form, such as O2 or H2, are assigned an oxidation state of zero. For example, the reaction of aluminum with oxygen to produce aluminum oxide is

Assigning oxidation numbers to the elements in binary ionic compounds is straightforward: the oxidation numbers of the elements are identical to the charges on the monatomic ions. Previously, you learned how to predict the formulas of simple ionic compounds based on the sign and magnitude of the charge on monatomic ions formed by the neutral elements. Examples of such compounds are sodium chloride (NaCl; Figure \(\PageIndex{1}\)), magnesium oxide (MgO), and calcium chloride (CaCl2). In covalent compounds, in contrast, atoms share electrons. However, we can still assign oxidation states to the elements involved by treating them as if they were ionic (that is, as if all the bonding electrons were transferred to the more attractive element). Oxidation states in covalent compounds are somewhat arbitrary, but they are useful bookkeeping devices to help you understand and predict many reactions. Figure \(\PageIndex{1}\): The Reaction of a Neutral Sodium Atom with a Neutral Chlorine Atom. The result is the transfer of one electron from sodium to chlorine, forming the ionic compound NaCl.

A set of rules for assigning oxidation numbers to atoms in chemical compounds follows.

Nonintegral (fractional) oxidation numbers are encountered occasionally. They are usually due to the presence of two or more atoms of the same element with different oxidation states.

Rule 3 is required because fluorine attracts electrons more strongly than any other element, for reasons you will discover in Chapter 6. Hence fluorine provides a reference for calculating the oxidation states of other atoms in chemical compounds. Rule 4 reflects the difference in chemistry observed for compounds of hydrogen with nonmetals (such as chlorine) as opposed to compounds of hydrogen with metals (such as sodium). For example, NaH contains the H− ion, whereas HCl forms H+ and Cl− ions when dissolved in water. Rule 5 is necessary because fluorine has a greater attraction for electrons than oxygen does; this rule also prevents violations of rule 2. So the oxidation state of oxygen is +2 in OF2 but −½ in KO2. Note that an oxidation state of −½ for O in KO2 is perfectly acceptable.

Many types of chemical reactions are classified as redox reactions, and it would be impossible to memorize all of them. However, there are a few important types of redox reactions that you are likely to encounter and should be familiar with. These include:

The following sections describe another important class of redox reactions: single-displacement reactions of metals in solution.

A widely encountered class of oxidation–reduction reactions is the reaction of aqueous solutions of acids or metal salts with solid metals. An example is the corrosion of metal objects, such as the rusting of an automobile (Figure \(\PageIndex{2}\)). Rust is formed from a complex oxidation–reduction reaction involving dilute acid solutions that contain Cl− ions (effectively, dilute HCl), iron metal, and oxygen. When an object rusts, iron metal reacts with HCl(aq) to produce iron(II) chloride and hydrogen gas:

In subsequent steps, \(\ce{FeCl2}\) undergoes oxidation to form a reddish-brown precipitate of \(\ce{Fe(OH)3}\). 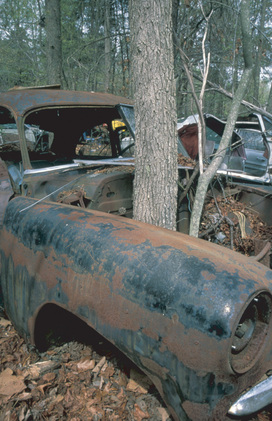 Figure \(\PageIndex{2}\): Rust Formation. The corrosion process involves an oxidation–reduction reaction in which metallic iron is converted to Fe(OH)3, a reddish-brown solid.

Certain metals are oxidized by aqueous acid, whereas others are oxidized by aqueous solutions of various metal salts. Both types of reactions are called single-displacement reactions, in which the ion in solution is displaced through oxidation of the metal. Two examples of single-displacement reactions are the reduction of iron salts by zinc (Equation \(\ref{4.4.84}\)) and the reduction of silver salts by copper (Equation \(\ref{4.4.85}\) and Figure \(\PageIndex{3}\)):

The reaction in Equation \(\ref{4.4.84}\) is widely used to prevent (or at least postpone) the corrosion of iron or steel objects, such as nails and sheet metal. The process of “galvanizing” consists of applying a thin coating of zinc to the iron or steel, thus protecting it from oxidation as long as zinc remains on the object. Figure \(\PageIndex{3}\): The Single-Displacement Reaction of Metallic Copper with a Solution of Silver Nitrate. When a copper coil is placed in a solution of silver nitrate, silver ions are reduced to metallic silver on the copper surface, and some of the copper metal dissolves. Note the formation of a metallic silver precipitate on the copper coil and a blue color in the surrounding solution due to the presence of aqueous \(\ce{Cu^{2+}}\) ions. Figure used with permission (CC BY-SA 3.0; Toby Hudson).

By observing what happens when samples of various metals are placed in contact with solutions of other metals, chemists have arranged the metals according to the relative ease or difficulty with which they can be oxidized in a single-displacement reaction. For example, metallic zinc reacts with iron salts, and metallic copper reacts with silver salts. Experimentally, it is found that zinc reacts with both copper salts and silver salts, producing \(\ce{Zn2+}\). Zinc therefore has a greater tendency to be oxidized than does iron, copper, or silver. Although zinc will not react with magnesium salts to give magnesium metal, magnesium metal will react with zinc salts to give zinc metal: