The main source of energy for eukaryotes is glucose. When glucose is unavailable, organisms are capable of metabolizing glucose from other non-carbohydrate precursors. The process that coverts pyruvate into glucose is called gluconeogenesis.  Pyruvate can be generated from the degradation of lactate, fatty acids, certain amino acids and glycerol.

This metabolic pathway is important because the brain depends on glucose as its primary fuel and red blood cells use only glucose as a fuel. The daily glucose requirement of the brain in a typical adult human being is about 120 g, which accounts for most of the 160 g of glucose needed daily by the whole body. The amount of glucose present in body fluids is about 20 g, and that readily available from glycogen, a storage form of glucose, is approximately 190 g. Thus, the direct glucose reserves are sufficient to meet glucose needs for about a day. During a longer period of starvation, glucose must be formed from noncarbohydrate sources.

The major site of gluconeogenesis is the liver, with a small amount also taking place in the kidney, brain, skeletal muscle, or heart muscle.

Gluconeogenesis Is Not a Reversal of Glycolysis

In glycolysis, glucose is converted into pyruvate; in gluconeogenesis, pyruvate is converted into glucose. However, gluconeogenesis is not a reversal of glycolysis (see figure 8.9.1). Several reactions must differ because the equilibrium of glycolysis lies far on the side of pyruvate formation. The actual ΔG for the formation of pyruvate from glucose is about -20 kcal mol-1 (-84 kJ mol-1) under typical cellular conditions. Most of the decrease in free energy in glycolysis takes place in the three essentially irreversible steps catalyzed by hexokinase, phosphofructokinase, and pyruvate kinase.

In gluconeogenesis, the following new steps bypass these virtually irreversible reactions of glycolysis: 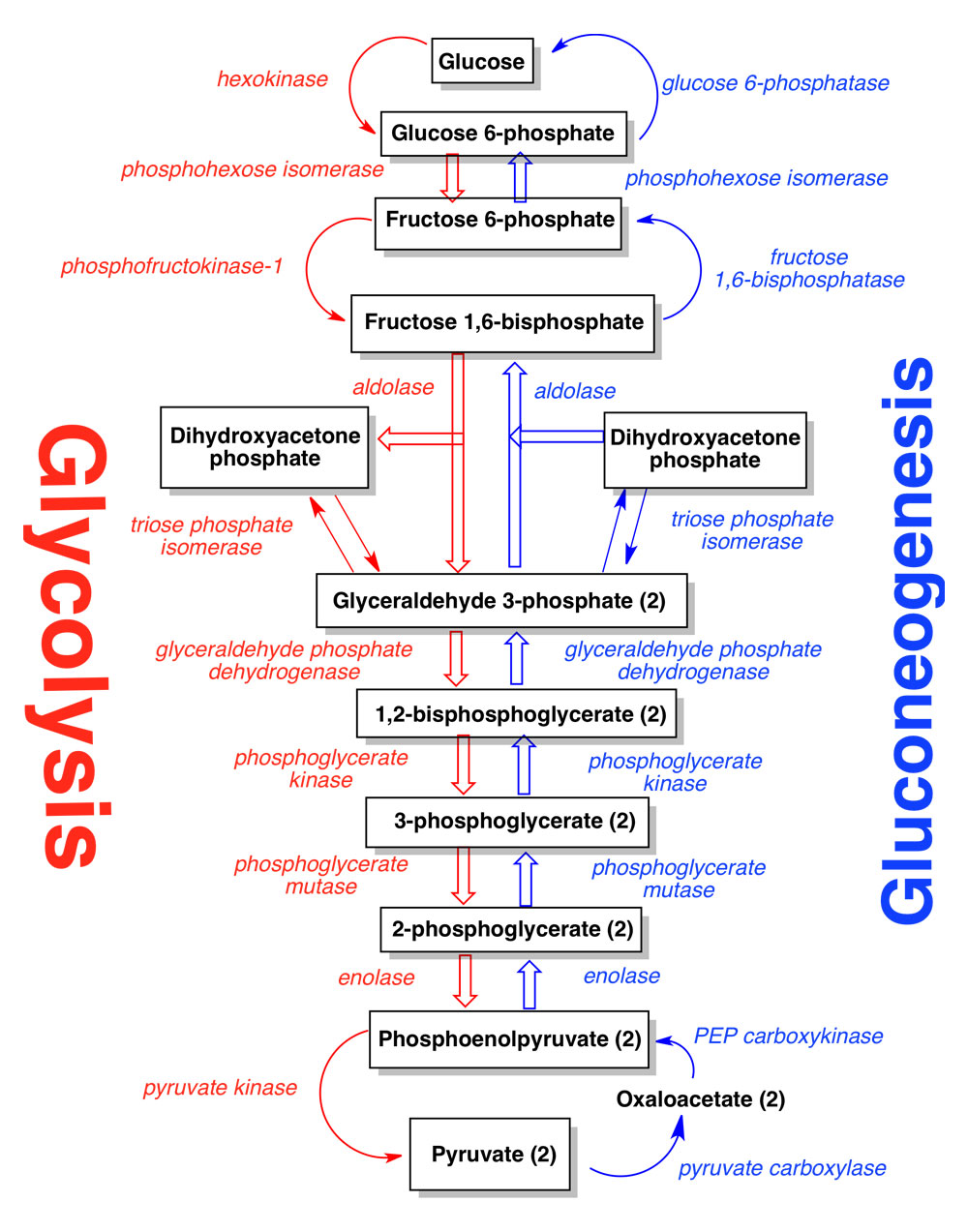 It is important for organisms to conserve energy, they have derived ways to regulate those metabolic pathways that require and release the most energy. When there is an excess of energy available, gluconeogenesis is inhibited. When energy is required, gluconeogenesis is activated.