Alcohols add reversibly to aldehydes and ketones to form hemiacetals or hemiketals (hemi, Greek, half). This reaction can continue by adding another alcohol to form an acetal or ketal. These are important functional groups because they appear in sugars.

To achieve effective hemiacetal or acetal formation, two additional features must be implemented. First, an acid catalyst must be used because alcohol is a weak nucleophile; and second, the water produced with the acetal must be removed from the reaction by a process such as a molecular sieves or a Dean-Stark trap. The latter is important, since acetal formation is reversible. Whether the reaction stops at the hemiacetal or hemiketal also depends on the concentration of alcohol used in the experiment. In presence of up to 1 equivalent of alcohol, the reaction stops at the hemiacetal or hemiketal, but in presence of excess of alcohol, the reaction continues to form the acetal and ketal.

Formation of Hemiacetals and Acetals

Figure 1. Formation of a hemiacetal and acetal from the reaction between an aldehyde and an alcohol. Notice that the reaction is reversible and requires an acid catalyst. Image by Ryan Neff, CC BY-SA 3.0, via Wikimedia Commons

Example: reaction between ethanal and ethanol Figure 2. Formation of a hemiketal and ketal from the reaction between a ketone and an alcohol. Notice that the reaction is reversible and requires an acid catalyst. Image by Ryan Neff, CC BY-SA 3.0, via Wikimedia Commons

Example: reaction between propane and ethanol The mechanism shown here applies to both acetal and hemiacetal formation, but it applies to ketals and hemiketals as well.

a) Formation of an hemiacetal

This reaction is an addition, in which the alcohol molecule behaves as the nucleophile

b) Formation of an acetal

1) Protonation of the alcohol

3) Nucleophilic attack by the alcohol Example: Identify each product as an acetal, hemiacetal, ketal, or hemiketal:

a) There is H attached to the sp3 carbon and an OH group. The compound is a hemiacetal

b)There is no H attached to the sp3 carbon and an OH group. The compound is a hemiketal

c) There is no H attached to the sp3 carbon and no OH group. The compound is a ketal

d) There is H attached to the sp3 carbon and no OH group. The compound is a acetal 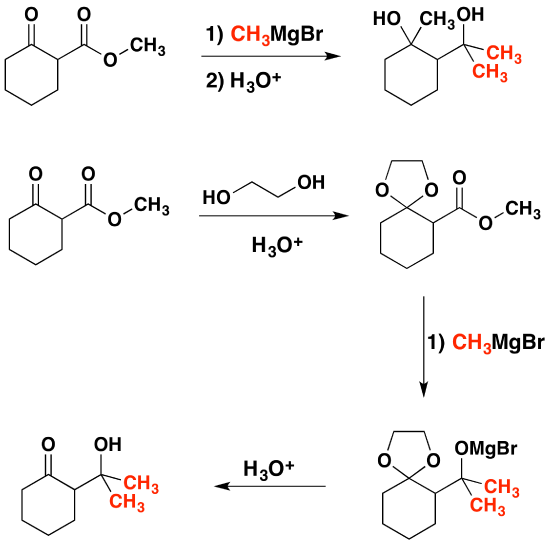