After completing this section, you should be able to draw all possible resonance structures for a given species.

Electrons have no fixed position in atoms, compounds and molecules (see image below) but have probabilities of being found in certain spaces (orbitals). Resonance forms illustrate areas of higher probabilities (electron densities). This is like holding your hat in either your right hand or your left. The term Resonance is applied when there are two or more possibilities available. Resonance structures do not change the relative positions of the atoms like your arms in the metaphor. The skeleton of the Lewis Structure remains the same, only the electron locations change. A double headed arrow on both ends of the arrow ( \( \leftrightarrow \) ) between Lewis structures is used to show their inter-connectivity. It is different from the double harpoons ( \( \rightleftharpoons\) ) used for designating equilibria. A double headed arrow on only one end ( \( \rightarrow \) ) is used to indicate the movement of two electrons in a single resonance structure. 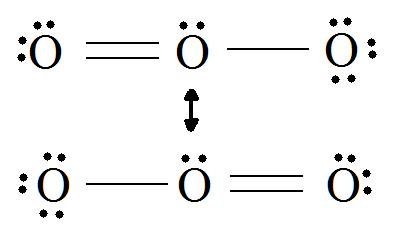 Figure: This is an animation of how one can do a resonance with ozone by moving electrons.

In resonance structures, the electrons are able to move to help stabilize the molecule. This movement of the electrons is called delocalization.

The equation for finding Formal Charge is:

The formal charge has to equal the molecule's overall charge.

Ex.) CNS- has an overall charge of -1, so the Lewis structure's formal charge has to equal -1. See Lewis Structure for more information. Step 2: Combine the resonance structures by adding (dotted) bonds where other resonance bonds can be formed. Step 3: Add only the lone pairs found on ALL resonance structures. The bottom is the finished resonance hybrid for CO32-.

Benzene is an extremely stable molecule and it is accounted for its geometry and molecular orbital interaction, but most importantly it's due to its resonance structures. The delocalized electrons in the benzene ring make the molecule very stable and with its characteristics of a nucleophile, it will react with a strong electrophile only and after the first reactivity, the substituted benzene will depend on its resonance to direct the next position for the reaction to add a second substituent.

The next molecule, the Amide, is a very stable molecule that is present in most biological systems, mainly in proteins. By studies of NMR spectroscopy and X-Ray crystallography it is confirmed that the stability of the amide is due to resonance which through molecular orbital interaction creates almost a double bond between the Nitrogen and the carbon.

Example 2.6.5: Multiple Resonance of other Molecules

Molecules with more than one resonance form

The Hybrid Resonance forms show the different Lewis structures with the electron been delocalized. This is very important for the reactivity of chloro-benzene because in the presence of an electrophile it will react and the formation of another bond will be directed and determine by resonance. The long pair of electrons delocalized in the aromatic substituted ring is where it can potentially form a new bond with an electrophile, as it is shown there are three possible places that reactivity can take place, the first to react will take place at the para position with respect to the chloro substituent and then to either ortho position.