The popular notion that the sciences are bodies of established fact is entirely mistaken. Nothing in science is permanently established, nothing unalterable, and indeed science is quite clearly changing all the time, and not through the accretion of new certainties. Karl Popper

The progress of science is strewn, like an ancient desert trail, with the bleached skeletons of discarded theories which once seemed to possess eternal life. Arthur Koestler

Popular views of science imply that there exists a mechanical and logically certain relationship between scientific facts and their explanations. According to these views scientific knowledge possesses a certainty which is not to be found in other disciplines such as the humanities or the social sciences. The quotations by Sullivan, Popper and Koestler suggest that there might be more to it than this.

The purpose of this paper is to present an outline of one view of the structure of scientific knowledge and to argue that aesthetics plays an important role in the evolution and progress of scientific thought. The ideas presented here represent a distillation of the thinking of several important scientists — at least those who took the time to explain to others what it was they thought they were doing.

The aim of science is the discovery of the rational order which pervades the universe. The method of science consists of observation and experimentation for the determination of the facts of Nature. Science uses inductive and deductive reasoning for the discovery of the mutual relations and connections between the facts of nature. In other words, scientists use inductive and deductive reasoning to generate hypotheses and theories which order the facts of nature. Science rests on verified, or more correctly, on uncontradicted hypotheses, and, therefore, an important condition of its progress has been the invention or creation of verifiable hypotheses.

Albert Einstein, a 20th-century physicist, concerned with scientific problems a world apart from Huxley, described science in much the same way.

The supreme task of the scientist is to arrive at those universal elementary laws from which the physical cosmos can be built up by pure deduction. His work thus falls into two parts. He must first discover the laws and then draw the conclusions which follow from them. For the second of these tasks he receives an admirable training at school. However, the first, namely that of establishing the starting point of his deductions, is of an entirely different nature. Here there is no method capable of being learned and systematically applied so that it leads to the goal. There is no logical path to these principles; only intuition, resting on a sympathetic understanding of experience can reach them.

Carl Hempel, a contemporary philosopher of science, said much the same thing.

There are no generally applicable "rules of induction" by which hypotheses or theories can be mechanically derived or inferred directly from empirical data. The transition from data to theory requires creative imagination. Theories are not derived from the data, but invented in order to account for them.

In the diagram below I have attempted to provide a graphical representation of these statements on the structure of scientific knowledge. 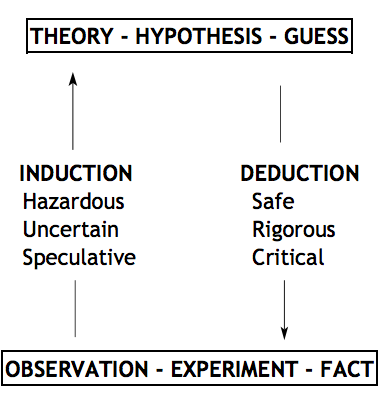 The essential point is that induction is not a logically rigorous process; it is incapable of leading us with certainty to the truth. As Max Jammer has said, "The fact that all past futures have resembled past pasts does not guarantee that all future futures will resemble future pasts."

Another way to put this is to say that scientific hypotheses go beyond the facts, always claiming more than is justified. In a certain sense they are works of fiction. Thus, Peter Medawar has described scientific reasoning as "an exploratory dialogue that can always be resolved into two voices or episodes of thought, imaginative and critical, which alternate and interact." Scientific thinking is a dialogue between what might be and what actually is.

The objectivity of scientific knowledge is preserved by its critical voice, by the requirement that scientific creations must ultimately face reality. In this critical episode, a scientific theory cannot really be confirmed or proven true, it can only survive; survive at least until the next confrontation with reality. According to Karl Popper, observation and experiment in science serve as critical tests of hypotheses rather than inductive bases for them. "The logic of science and an essential criterion for its progress is the falsification of conjectures."

In the light of the above considerations, Einstein posed the following question.

If, then, it is true that the axiomatic basis of science cannot be extracted from experience but must be freely invented, can we ever hope to find the right way?

This was, of course, a rhetorical question. Einstein demanded two things of a scientific theory: external confirmation and internal perfection. A theory must not only be consistent with experiment, it must also be pleasing to the mind. Simplicity and beauty, he argued, can guide the scientific thinker toward the truth. Einstein was not being immodest when he said of his own General Theory of Relativity, "No one who fully understands this theory can escape its magic."

Later, when asked if he was troubled by the early lack of experimental confirmation of his General Theory, he replied,

Such questions did not lie in my path. The result could not be otherwise than correct. I was only concerned with putting the theory into a lucid form. I did not for one second doubt that it would agree with observation. The sense of the thing was too evident.

More recently, Paul Dirac, a successor to Newton as Lucasian Professor of Mathematics at Cambridge (some great physicists are apparently really mathematicians) and co-winner of the 1933 Nobel prize in physics with Erwin Schrödinger, described Schrödinger's seminal achievement in the following way.

Schrödinger got his equation by pure thought, looking for some beautiful generalization of De Broglie's idea, and not by keeping close to the experimental development of the subject... It seems that if one is working from the point of view getting beauty in one's equations, and if one has really sound insight, one is on a sure line of progress.

We have come to call Schrödinger's work "wave mechanics" and it does for the nano-world of atoms and molecules what Newton's Laws of Motion do for the macro-world of solar systems, pendulums and billiard balls. At about the same time as Schrödinger's work came out, Werner Heisenberg, a brilliant, young (full professor at Leipzig at the age of 25; Nobel prize at 31) physicist created an alternative approach to the nano-world called "matrix mechanics." Schrödinger found Heisenberg's approach "repulsive and distasteful" and threatened to quit physics if "matrix mechanics" held sway. Subsequently it was shown (by Schrödinger!) that the two theories were formally equivalent, suggesting that in science beauty is also in the eye of the beholder.

Immediately after this period, Niels Bohr, Max Born and Dirac added to the contributions of Schrödinger and Heisenberg to create a more comprehensive theory called "quantum mechanics." It is widely regarded as the most successful scientific theory ever. Like any good scientific theory, it has been found to be very helpful in interpreting experimental results and in serving as a guide for further inquiry. But, it wasn't good enough for Einstein. Recall that in his opinion external confirmation was only one aspect of a healthy scientific theory. Quantum mechanics failed his other criterion. He expressed his dissatisfaction frequently, but perhaps never more poignantly as in the following comment he made to Max Born.

Quantum mechanics is certainly imposing. But an inner voice tells me that it is not yet the real thing. The theory says a lot, but does not really bring us any closer to the secret of the 'old one.' I, at any rate, am convinced that He is not playing at dice.

Quantum mechanics challenges our traditional ideas of objectivity and causality, and Einstein claimed these as the fundamental principles of all science. He did not believe that God would make a world based on quantum mechanical principles. For almost forty years Einstein remained quantum mechanics’ foremost critic, isolating himself in his mature years from the rest of the creative scientific community. The best experimental evidence we have today indicates that Einstein's intuition led him astray this time. Several of quantum mechanics' most bizarre predictions with regard to the principle of cause and effect at the nanoscopic level have been confirmed experimentally. Long before this evidence was available Bohr became exasperated by Einstein's continual criticisms and retorted, "Einstein, stop telling God what to do!"

A final example recounts the peculiar role that aesthetics and creative imagination played in the birth of modern astronomy. Johann Kepler, a contemporary of Galileo and Shakespeare, was driven by two Pythagorean convictions in his attempts to explain celestial dynamics. These were that the structure of the solar system could be modeled using the five perfect solids and that the planetary motions could be interpreted in terms of the musical harmonies. Guided by these obsessions, Kepler ultimately discovered the three laws of planetary motion for which he is famous today. But these early examples of modern scientific laws, which eventually had such a profound impact on the evolution of physical science, were so deeply embedded in his semi-mystical writings that few of his contemporaries found them. And Kepler himself considered them to be of secondary importance to the grandiose models he built on the basis of the perfect solids and the musical harmonies. Newton and his generation did find them, recognized their significance and used them to build a new and powerful science.

The following quotations, the first by Jacob Bronowski and the second by Einstein, summarize the position presented in this paper.

Science is basically an artistic endeavor. It has all the freedom of any other imaginative endeavor. The artist and the scientist both live at the edge of mystery, surrounded by it. Both struggle to make order out of the chaos.

Science as an existing, finished product is the most objective, most un-personal thing human beings know. But science as something coming into being, as aim, is just as subjective and psychologically conditioned as any other of man's efforts.