Most general chemistry textbooks invoke sp3 hybridization to explain the bonding in the tetrahedral methane (CH4) molecule. The idea (valence bond theory, VBT) is that good overlap between the atomic orbitals centered on carbon and hydrogen leads to strong bonds. The problem is that the carbon 2s and 2p valence orbitals don’t point in the tetrahedral directions occupied by the hydrogen 1s valence orbitals. Linus Pauling solved this problem in 1931 by mathematically hybridizing carbon’s 2s and 2p orbitals so that the resulting hybrids (linear combinations) point toward the hydrogen 1s orbitals.

A typical representation of the valence bond approach to methane bonding is shown in the following graphic taken from the 5th edition of McMurray and Fay’s General Chemistry text. It might be assumed that the tetrahedral geometry of methane requires sp3 hybridization of the carbon 2s and 2p valence atomic orbitals. However, this is not the case because there is a perfectly valid alternative bonding model, molecular orbital theory, which has solid empirical support.

Molecular orbital theory (MOT) for methane forms bonding molecular orbitals involving linear combinations of the unhybridized carbon 2s and 2p valence orbitals with the hydrogen 1s orbitals as shown in the graphic below. The plus and minus signs signify phase, not electrical charge. 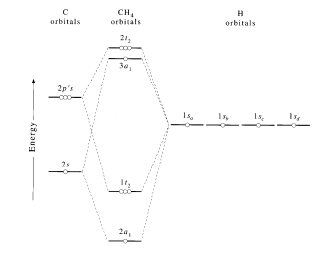 Methane has eight valence electrons, so according to the aufbau and Pauli exclusion principles the two lowest energy molecular orbitals (2a1 and 1t2) are fully occupied with electrons. This is consistent with the experimental valence electron ionization spectrum for methane shown below. (McQuarrie & Simon, Physical Chemistry: A Molecular Approach, p. 388) The VBT model appears to predict only one valence electron ionization energy for methane, because there is only one kind of bonding electron – an electron in a carbon sp3 hybridized orbital which overlaps with a tetrahedrally located hydrogen 1s orbital. To see how VBT accounts for two ionization energies see the following reference: Journal of Chemical Education, 89, 570‐572 (2012).