Let's look at a very simple comparison of rates. We'll look at what might happen when we roll a ball along a sidewalk. We'll roll two balls, side by side: a red one and a blue one. We'll give the red ball a slightly harder push, and give the blue one a softer touch. Then we'll snap some pictures of the two balls as they roll along. The following drawings are a sequence of these pictures. Let's assume we take a picture every second. You will notice that some kid has maed off a line every meter using sidewalk chalk.

What do we see? The red ball is going a little faster than the blue one. It is making more progress over time. Sometimes, it's useful to make a graph of our observations. A graph lets us see the relationships among the data we have observed. In this case, the data is just the distance the ball has moved (in meters) and the time (in seconds). This particular relationship is described as a "linear relationship"; that just means that, when we graph the distance the ball has moved over time, we see a straight line. This is true for both the blue ball and the red ball. In this case, it tells us that both balls are moving at a steady speed.

However, the red ball is moving more quickly than the blue ball. We can easily use the graph to measure exactly how much more quickly it is moving (you may also be able to do it just by looking at our pictures of the ball rolling along the sidewalk. We can use the slope of the line to determine the rate of change of distance with changing time.

Let's look at another race between the red ball and the blue ball. This time, who knows? Maybe the blue one will win.

Clearly, the red ball is faster than the blue one again. But let's see what else is made clear by graphing the data. Again, the rate could be interpreted physically. The red ball may be accelerating because of some factor that is making it go faster and faster. Maybe the sidewalk is sloped on one side, so that the red ball is actually rolling slightly downhill.

Let's look at one more race between the red ball and the blue ball. This time, the balls have already been rolling for some time when we start taking pictures.

It looks like the blue ball starts out ahead, but it is soon passed by the red ball. When the progress is graphed, we can see a different kind of nonlinear relationship. Why is the red ball slowing down, but the blue one is not? Maybe the sidewalk is uneven again, but this time the red ball is going uphill. You might be able to come up with other reasons, too.

Back to Chemical Reactions

This example may look a little unrealistic. The molecules are appearing from out of nowhere, and of course they cannot do that. Something cannot be made from nothing. We'll see other examples in which the origin of the new molecules is more clear. For the following cases in problem 4, make a qualitative graph showing what you think is happening to the rate of the reaction over time (e.g. Do you think the rate is increasing over time? How would you show that on a graph?)

How would you describe the similarities between the changes in the green molecules and the pink molecules in the previous questions? What about the differences?

Frequently, instead of just plotting changes in one compound, we might graph changes in two things at once. That way, we can look for relationships between them. 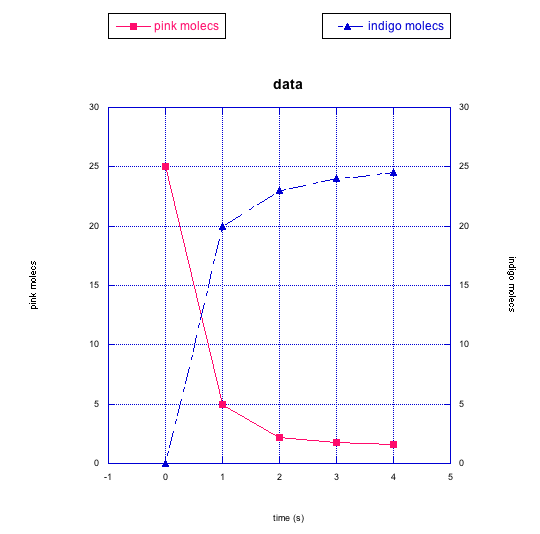 The following graphs also show changes in two different compounds at once. Describe what you think is happening in each case.