The vast majority of reactions depend on thermal activation, so the major factor to consider is the fraction of the molecules that possess enough kinetic energy to react at a given temperature. According to kinetic molecular theory, a population of molecules at a given temperature is distributed over a variety of kinetic energies that is described by the Maxwell-Boltzman distribution law. 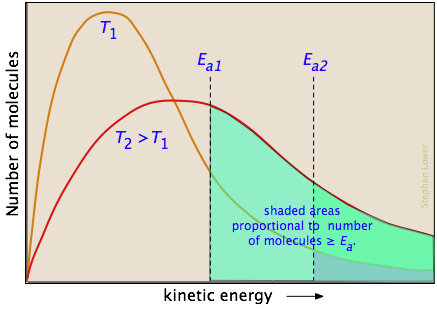 It is clear from these plots that the fraction of molecules whose kinetic energy exceeds the activation energy increases quite rapidly as the temperature is raised. This the reason that virtually all chemical reactions (and all elementary reactions) proceed more rapidly at higher temperatures.

Some may ask how the temperature actually affects the chemical reaction rate. The answer to this is that this phenomenon is related to the collision theory. Molecules only react if they have sufficient energy for a reaction to take place. When the temperature of a solution increases, the molecular energy levels also increase, causing the reaction to proceedfaster.

The graph of ln K vs. 1/T is linear, allowing the calculation of the activation energy needed for the reaction. An alternate form of the Arrhenius equation is given below: