The kinetic theory describes a gas as a large number of submicroscopic particles (atoms or molecules), all of which are in constant, random motion. The rapidly moving particles constantly collide with each other and with the walls of the container. Kinetic theory explains macroscopic properties of gases, such as pressure, temperature, viscosity, thermal conductivity, and volume, by considering their molecular composition and motion. The theory posits that gas pressure is due to the impacts, on the walls of a container, of molecules or atoms moving at different velocities.

The five basic tenets of the kinetic-molecular theory are as follows:

According to this model, most of the volume occupied by a gas is empty space; this is the main feature that distinguishes gases from condensed states of matter (liquids and solids) in which neighboring molecules are constantly in contact. Gas molecules are in rapid and continuous motion; at ordinary temperatures and pressures their velocities are of the order of 0.1-1 km/sec and each molecule experiences approximately 1010collisions with other molecules every second.

If gases do in fact consist of widely-separated particles, then the observable properties of gases must be explainable in terms of the simple mechanics that govern the motions of the individual molecules. The kinetic molecular theory makes it easy to see why a gas should exert a pressure on the walls of a container. Any surface in contact with the gas is constantly bombarded by the molecules.

At each collision, a molecule moving with momentum mv strikes the surface. Since the collisions are elastic, the molecule bounces back with the same velocity in the opposite direction. This change in velocity ΔV is equivalent to an acceleration a; according to Newton's second law, a force f = ma is thus exerted on the surface of area A exerting a pressure P = f/A.

According to the kinetic molecular theory, the average kinetic energy of an ideal gas is directly proportional to the absolute temperature. Kinetic energy is the energy a body has by virtue of its motion:

Derivation of the Ideal Gas Law

One of the triumphs of the kinetic molecular theory was the derivation of the ideal gas law from simple mechanics in the late nineteenth century. This is a beautiful example of how the principles of elementary mechanics can be applied to a simple model to develop a useful description of the behavior of macroscopic matter. We begin by recalling that the pressure of a gas arises from the force exerted when molecules collide with the walls of the container. This force can be found from Newton's law

in which \(v\) is the velocity component of the molecule in the direction perpendicular to the wall and \(m\) is its mass. 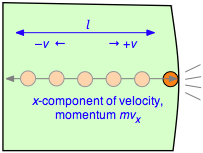 To evaluate the derivative, which is the velocity change per unit time, consider a single molecule of a gas contained in a cubic box of length l. For simplicity, assume that the molecule is moving along the x-axis which is perpendicular to a pair of walls, so that it is continually bouncing back and forth between the same pair of walls. When the molecule of mass m strikes the wall at velocity +v (and thus with a momentum mv ) it will rebound elastically and end up moving in the opposite direction with –v. The total change in velocity per collision is thus 2v and the change in momentum is \(2mv\).

After the collision the molecule must travel a distance l to the opposite wall, and then back across this same distance before colliding again with the wall in question. This determines the time between successive collisions with a given wall; the number of collisions per second will be \(v/2l\). The force \(F\) exerted on the wall is the rate of change of the momentum, given by the product of the momentum change per collision and the collision frequency:

Pressure is force per unit area, so the pressure \(P\) exerted by the molecule on the wall of cross-section \(l^2\) becomes

As noted near the beginning of this unit, any given molecule will make about the same number of moves in the positive and negative directions, so taking a simple average would yield zero. To avoid this embarrassment, we square the velocities before averaging them

and then take the square root of the average. This result is known as the root mean square (rms) velocity.

We have calculated the pressure due to a single molecule moving at a constant velocity in a direction perpendicular to a wall. If we now introduce more molecules, we must interpret \(v^2\) as an average value which we will denote by \(\bar{v^2}\). Also, since the molecules are moving randomly in all directions, only one-third of their total velocity will be directed along any one Cartesian axis, so the total pressure exerted by \(N\) molecules becomes

Recalling that \(m\bar{v^2}/2\) is the average translational kinetic energy \(\epsilon\), we can rewrite the above expression as

The 2/3 factor in the proportionality reflects the fact that velocity components in each of the three directions contributes ½ kT to the kinetic energy of the particle. The average translational kinetic energy is directly proportional to temperature:

The Boltzmann constant k is just the gas constant per molecule. For n moles of particles, the Equation \(\ref{2.7}\) becomes

which is the Ideal Gas law.