Connecting the energy-ordered orbitals of reactants to those of products according to symmetry elements that are preserved throughout the reaction produces an orbital correlation diagram.

In each of the examples cited above, symmetry reduction occurred as a molecule or atom approached and interacted with another species. The "path" along which this approach was thought to occur was characterized by symmetry in the sense that it preserved certain symmetry elements while destroying others. For example, the collision of two Nitrogen atoms to produce \(N_2\) clearly occurs in a way which destroys spherical symmetry but preserves axial symmetry. In the other example used above, the formaldehyde molecule was postulated to decompose along a path which preserves \(C_{2v}\) symmetry while destroying the axial symmetries of CO and \(H_2.\) The actual decomposition of formaldehyde may occur along some other path, but if it were to occur along the proposed path, then the symmetry analysis presented above would be useful.

The symmetry reduction analysis outlined above allows one to see new orbital interactions that arise (e.g., the 2s and \(2p_z\) interactions in the \(N + N \rightarrow N_2\) example) as the interaction increases. It also allows one to construct orbital correlation diagrams (OCD's) in which the orbitals of the "reactants" and "products" are energy ordered and labeled by the symmetries which are preserved throughout the "path", and the orbitals are then correlated by drawing lines connecting the orbitals of a given symmetry, one-by-one in increasing energy, from the reactants side of the diagram to the products side. As noted above, such orbital correlation diagrams play a central role in using symmetry to predict whether photochemical and thermal chemical reactions will experience activation barriers along proposed reaction paths (this subject is treated in Chapter 12).

To again illustrate the construction of an OCD, consider the p orbitals of 1,3- butadiene as the molecule undergoes disrotatory closing (notice that this is where a particular path is postulated; the actual reaction may or may not occur along such a path) to form cyclobutene. Along this path, the plane of symmetry which bisects and is perpendicular to the \(C_2-C_3\) bond is preserved, so the orbitals of the reactant and product are labeled as being even-e or odd-o under reflection through this plane. It is not proper to label the orbitals with respect to their symmetry under the plane containing the four C atoms; although this plane is indeed a symmetry operation for the reactants and products, it does not remain a valid symmetry throughout the reaction path. If the reactants could be prepared, for example by photolysis, in an excited state having orbital occupancy \(\pi_1^2 \pi_2^1 \pi_3^1,\) then reaction along the path considered would not have any symmetry-imposed barrier because this singly excited configuration correlates to a singly-excited configuration \(\sigma^2\pi^1\pi^{\text{*}1}\) of the products. The fact that the reactant and product configurations are of equivalent excitation level causes there to be no symmetry constraints on the photochemically induced reaction of 1,3-butadiene to produce cyclobutene. In contrast, the thermal reaction considered first above has a symmetry-imposed barrier because the orbital occupancy is forced to rearrange (by the occupancy of two electrons) from the ground-state wavefunction of the reactant to smoothly evolve into that of the product.

It should be stressed that although these symmetry considerations may allow one to anticipate barriers on reaction potential energy surfaces, they have nothing to do with the thermodynamic energy differences of such reactions. Symmetry says whether there will be symmetry-imposed barriers above and beyond any thermodynamic energy differences. The enthalpies of formation of reactants and products contain the information about the reaction's overall energy balance.

As another example of an OCD, consider the \(N + N \rightarrow N_2\) recombination reaction mentioned above. The orbitals of the atoms must first be labeled according to the axial rotation group (including the inversion operation because this is a homonuclear molecule). The core 1s orbitals are symmetry adapted to produce \(1\sigma_g \text{ and } 1\sigma_u\) orbitals (the number 1 is used to indicate that these are the lowest energy orbitals of their respective symmetries); the 2s orbitals generate \(2\sigma_g \text{ and } 2\sigma_u\) orbitals; the 2p orbitals combine to yield \(3\sigma_g\) , a pair of \(1\pi_u\) orbitals, a pair of \(1\pi_g\) orbitals, and the \(3\sigma_u\) orbital, whose bonding, nonbonding, and antibonding nature was detailed earlier. In the two separated Nitrogen atoms, the two orbitals derived from the 2s atomic orbitals are degenerate, and the six orbitals derived from the Nitrogen atoms' 2p orbitals are degenerate. At the equilibrium geometry of the \(N_2\) molecule, these degeneracies are lifted, Only the degeneracies of the \(1\pi_u \text{ and } 1\pi_g\) orbitals, which are dictated by the degeneracy of +m and -m orbitals within the axial rotation group, remain.

As one proceeds inward past the equilibrium bond length of \(N_2\), toward the unitedatom limit in which the two Nitrogen nuclei are fused to produce a Silicon nucleus, the energy ordering of the orbitals changes. Labeling the orbitals of the Silicon atom according to the axial rotation group, one finds the 1s is \(\sigma_g , \text{ the 2s is } \sigma_g ,\text{ the 2p orbitals are } \sigma_u \text{ and } \pi_u\) , the 3s orbital is \(\sigma_g\) , the 3p orbitals are \(\sigma_u \text{ and } \pi_u ,\text{ and the 3d orbitals are } \sigma_g , \pi_g , \text{ and } \delta_g.\) The following OCD is obtained when one connects the orbitals of the two separated Nitrogen atoms (properly symmetry adapted) to those of the \(N_2\) molecule and eventually to those of the Silicon atom. 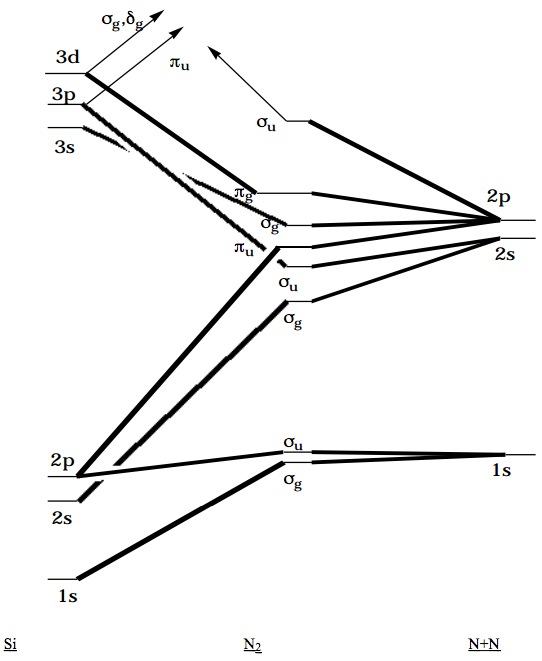 The fact that the separated-atom and united-atom limits involve several crossings in the OCD can be used to explain barriers in the potential energy curves of such diatomic molecules which occur at short internuclear distances. It should be noted that the Silicon atom's 3p orbitals of \(\pi_u\) symmetry and its 3d orbitals of \(\sigma_g \text{ and } \delta_g\) symmetry correlate with higher energy orbitals of \(N_2\) not with the valence orbitals of this molecule, and that the 3su antibonding orbital of N2 correlates with a higher energy orbital of Silicon (in particular, its 4p orbital).