The term chemical kinetics refers to the study of the rates of chemical reactions. As we will see, differential equations play a central role in the mathematical treatment of chemical kinetics. We will start with the simplest examples, and then we will move to more complex cases. As you will see, in this section we will focus on a couple of reaction mechanisms. The common theme will be to find expressions that will allow us to calculate the concentration of the different species that take part of the reaction at different reaction times.

Let’s start with the simplest case, in which a reactant A reacts to give the product B. We’ll assume the reaction proceeds in one step, meaning there are no intermediates that can be detected.

The rate of the reaction (\(r\)) will be defined as the number of moles of A that disappear or the number of moles of B that appear per unit of time (e.g. per second) and volume (e.g. liter). This is true because of the stoichiometry of the reaction, as we will discuss in a moment. However, because the rate is a positive quantity, we will use a negative sign if we look at the disappearance of A:

The rate of the reaction, therefore, is a positive quantity with units of M.s\(^{-1}\), or in general, concentration per unit of time. As we will see, the rate of the reaction depends on the actual concentration of reactant, and therefore will in general decrease as the reaction progresses and the reactant is converted into product. Although all the molecules of A are identical, they do not need to react at the same instant. Consider the simple mechanism of Equation \ref{1order}, and imagine that every molecule of A has a probability \(p = 0.001\) of reacting in every one-second interval. Suppose you start with 1 mole of A in a 1 L flask (\([A]_0 = 1 M\)), and you measure the concentration of A one second later. How many moles of A do you expect to see? To answer this question, you can imagine that you get everybody in China (about one billion people) to throw a die at the same time, and that everybody who gets a six wins the game. How many winners do you expect to see? You know that the probability that each individual gets a six is \(p=1/6\), and therefore one-sixth of the players will win in one round of the game. Therefore, you can predict that the number of winers will be \(10^9/6\), and the number of losers will be \(5/6\times10^9\). If we get the losers to play a second round, we expect that one-sixth of them will get a six, which accounts for \(5/6\times10^9\times 1/6\) people. After the second run, therefore, we’ll still have \((5/6)^2\times10^9\) losers.

The proportionality constant, \(k\), is related to the probability that a molecule will react in a small time interval, as we discussed above. In this class, we will concentrate on solving differential equations such as the one above. This is a very simple differential equation that can be solved using different initial conditions. Let’s say that our goal is to find both [A]\((t)\) and [B]\((t)\). As chemists, we need to keep in mind that the law of mass conservation requires that

In plain English, the concentrations of A and B at any time need to add up to the sum of the initial concentrations, as one molecule of A converts into B, and we cannot create or destroy matter. Again, keep in mind that this equation will need to be modified according to the stoichiometry of the reaction. We will call an equation of this type a ‘mass balance’.

Before solving this equation, let’s look at other examples. What are the differential equations that describe this sequential mechanism?

In this mechanism, A is converted into C through an intermediate, B. Everything we discussed so far will apply to each of these two elementary reactions (the two that make up the overall mechanism). From the point of view of A nothing changes. Because the rate of the first reaction does not depend on B, it is irrelevant that B is converted into C (imagine you give 1 dollar per day to a friend. It does not matter whether you friend saves the money or gives it to someone else, you still lose 1 dollar per day).

What about C? Again, it is irrelevant that B was created from A (if you get 1 dollar a day from your friend, you don’t care if she got it from her parents, you still get 1 dollar per day). The rate at which C appears is proportional to the reactant in the second step: B. Therefore:

We know that the rate of a reaction is defined as the change in concentration with time...but which concentration? is it \(d[A]/dt\)? or \(d[B]/dt\)? or \(d[C]/dt\)? These are all different because 3 molecules of C are created each time 1 of B and 2 of A disappear. Which one should we use? Because 2 of A disappear every time 1 of B disappears: \(d[A]/dt= 2 d[B]/dt\). Now, considering that rates are positive quantities, and that the derivatives for the reactants, \(d[A]/dt\) and \(d[B]/dt\), are negative:

This example shows how to deal with the stoichiometric coefficients of the reaction. Note that in all our examples we assume that the reactions proceed as written, without any ‘hidden’ intermediate steps.

We have covered enough background, so we can start solving the mechanisms we introduced. Let’s start with the easiest one (Equations \ref{1order}, \ref{eq:1st} and \ref{mass}):

This mechanism is called a first order reaction because the rate is proportional to the first power of the concentration of reactant. For a second-order reaction, the rate is proportional to the square of the concentration of reactant (see Problem \(4.3\)). Let’s start by finding \([A](t)\) from \(-\frac{d[A]}{dt}=k[A]\). We’ll then obtain\([B](t)\) from the mass balance. This is a very simple differential equation because it is separable:

We integrate both sides of the equation, and combine the two integration constants in one:

Therefore, the particular solution is:

We can calculate the half-life of the reaction (\(t_{1/2}\)), defined as the time required for half the initial concentration of A to react. From Equation \ref{eq:mdecay}:

Note that in this case, the half-life does not depend on the initial concentration of A. This will not be the case for other types of mechanisms. Also, notice that we have already covered the concept of half-life in Chapter 1 (see Figure \(1.3.1\)), so this might be a good time to read that section again and refresh what we have already learned about sketching exponential decays.

We will now analyze a more complex mechanism, which involves the formation of an intermediate species (B):

which is mathematically described by Equations \ref{cons1}, \ref{cons2} and \ref{cons3}. Let’s assume that initially the concentration of A is [A]\(_0\), and the concentrations of B and C are zero. In addition, we can write a mass balance, which for these initial conditions is expressed as:

Let’s summarize the equations we have:

We need to solve the system of Equations \ref{consq1}-\ref{consq6}, and although there are methods to solve systems of differential equations (e.g. using linear algebra), this one is easy enough that can be solved with what we learned so far. This is because not all equations contain all variables. In particular, Equation \ref{consq1} is a simple separable equation with dependent variable [A], which can be solved independently of [B] and [C]. We in fact just solved this equation in the First Order Reactions section, so let’s write down the result:

Equation \ref{consq2} contains two dependent variables, but luckily we just obtained an expression for one of them. We can now re-write \ref{consq2} as:

Equation \ref{consq7} contains only one dependent variable, [B], one independent variable, \(t\), and three constants: \(k_1\), \(k_2\) and \([A]_0\). This is therefore an ordinary differential equation, and if it is either separable or linear, we will be able to solve it with the techniques we learned in this chapter. Recall eq. [sep], and verify that Equation \ref{consq7} cannot be separated as

In the next step, we need to recognize that the left-hand side of the equation is the derivative of the product of the dependent variable times the integrating factor:

We then take ‘\(dt\)’ to the right side of the equation and integrate both sides:

We have an arbitrary constant because this is a first order differential equation. Let’s calculate \(c\) using the initial condition \([B](t=0)=0\):

Before moving on, notice that we have assumed that \(k_1\neq k_2\). We were not explicit, but we performed the integration with this assumption. If \(k_1=k_2\) the exponential term becomes 1, which is not a function of \(t\). In this case, the integral will obviously be different, so our answer assumes \(k_1\neq k_2\). This is good news, since otherwise we would need to worry about the denominator of [eq:b(t)] being zero. You will solve the case \(k_1= k_2\) in Problem 4.4.

This is not too difficult because the equation is separable. However, it is easier to get [C] from the mass balance, Equation \ref{consq4}:

Plugging the answers we got for [A] and [B]:

Figure \(\PageIndex{6}\) shows the concentration profiles for a reaction with \(k_1=0.1 s^{-1}\) and \(k_2=0.5 s^{-1}\). Notice that because B is an intermediate, its concentration first increases, but then decreases as B is converted into C. The product C has a ‘lag phase’, because we need to wait until enough B is formed before we can see the concentration of C increase (first couple of seconds in this example). As you will see after solving your homework problems, the time at which the intermediate (B) achieves its maximum concentration depends on both \(k_1\) and \(k_2\).

So far we have discussed irreversible reactions. Yet, we know that many reactions are reversible, meaning that the reactant and product exist in equilibrium:

We cannot solve this equation as it is, because it has two dependent variables, [A] and [B]. However, we can write [B] in terms of [A], or [A] in terms of [B], by using the mass balance:

This is an ordinary, separable, first order differential equation, so it can be solved by direct integration. You will solve this problem in your homework, so let’s skip the steps and jump to the answer:

and we can re-write Equation \ref{eq:aeq} as

Advanced topic The following figure illustrates the experimental procedure known as “T-jump”, in which a sudden change in temperature is used to shift the position of a reversible reaction out of equilibrium. The experiment starts at a temperature \(T_1\), and the temperature is increased to \(T_2\) instantaneously at time \(t=0\). Because the equilibrium constant at \(T_2\) is different from the equilibrium constant at \(T_1\), the system needs to relax to the new equilibrium state. From the graph below estimate to the best of your abilities \(K_{eq} (T_1)\), \(K_{eq} (T_2)\), and the rate constants \(k_1\), and \(k_2\) at \(T_2\). 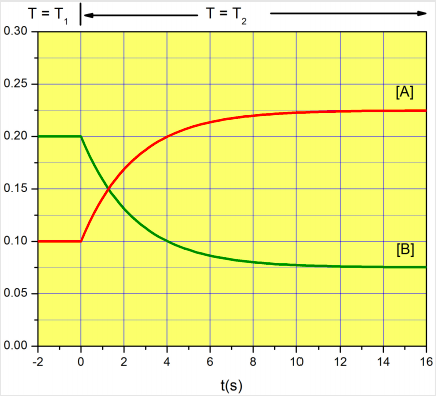