Once we become skilled at assigning configuration to chiral centers represented in 3-D notation, we can easily translate those into Fischer formulas. All we have to do is draw the cross with the four substituents attached to the chiral carbon, making sure the lowest priority group is lying on a horizontal line. At first we don’t need to worry about where the groups are, for if it’s wrong, all we have to do is exchange any two groups (make sure the lowest priority group remains on a horizontal line) to change configuration. Just as was shown before using 3-D formulas, the same molecule can be represented in Fischer notation in several different ways, all showing the same molecule. In the example below all the compounds represent the same (S) isomer.

Notice that we did not forget to always put the lowest priority group on a horizontal bond.

Open chain molecules containing two or more chiral centers are traditionally represented in Fischer notation showing the main carbon chain in a vertical arrangement. The D-(+)-glucose molecule below illustrates this convention, shown in both Fischer projection and the bow tie equivalent. Notice that in the latter only the end atoms have bonds shown with broken wedge lines. Also notice that all the hydrogen atoms bonded to chiral carbons are shown lying along horizontal lines. Identifying planes of symmetry in Fischer formulas is relatively easy, since they are planar representations. The following illustrations show examples of both chiral and achiral molecules.

The following example illustrates this point. In this example we have numbered the carbon atoms in the main chain according to IUPAC rules that will be studied later. We have also marked the chiral carbons with asterisks. Once the chiral centers have been identified, we focus on one at a time (shown as a red dot). First, we isolate carbon-2, then we assign priorities to the groups bonded to it, and assign configuration. In this case the configuration of carbon-2 turns out to be (R). A similar process for carbon-3 also leads to (R) configuration. 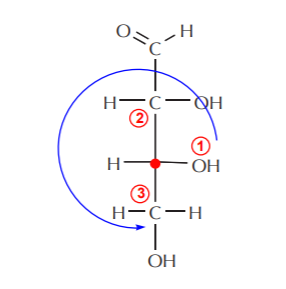 The IUPAC notation used to indicate the configurations at carbons 2 and 3 is therefore (2R, 3R)